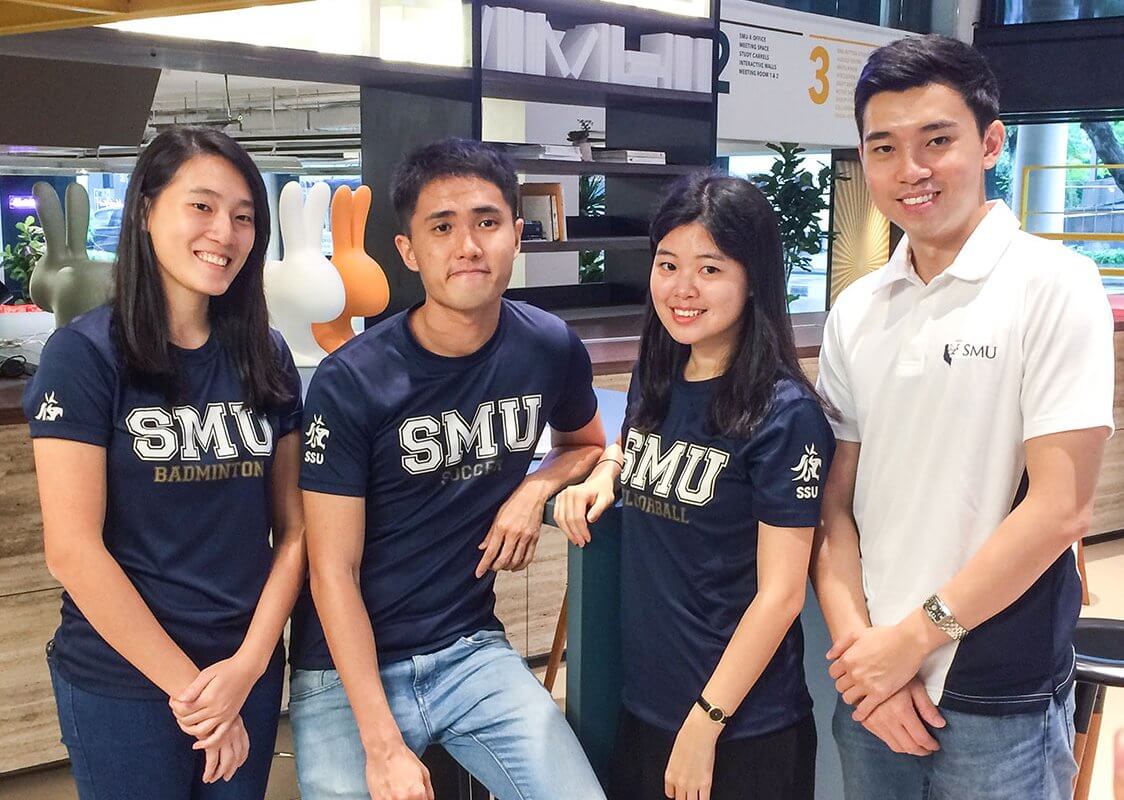 With thousands of Singaporeans venturing out on holiday or business into an ever more uncertain world, keeping them safe and secure is an increasingly daunting challenge for the Ministry of Foreign Affairs.

The first step is knowing who is where. The MFA has created an eRegistration portal for citizens heading overseas. However, many Singaporeans are simply unaware of it, while others do not understand its importance or see the benefit of going through a relatively long and complex registration process. 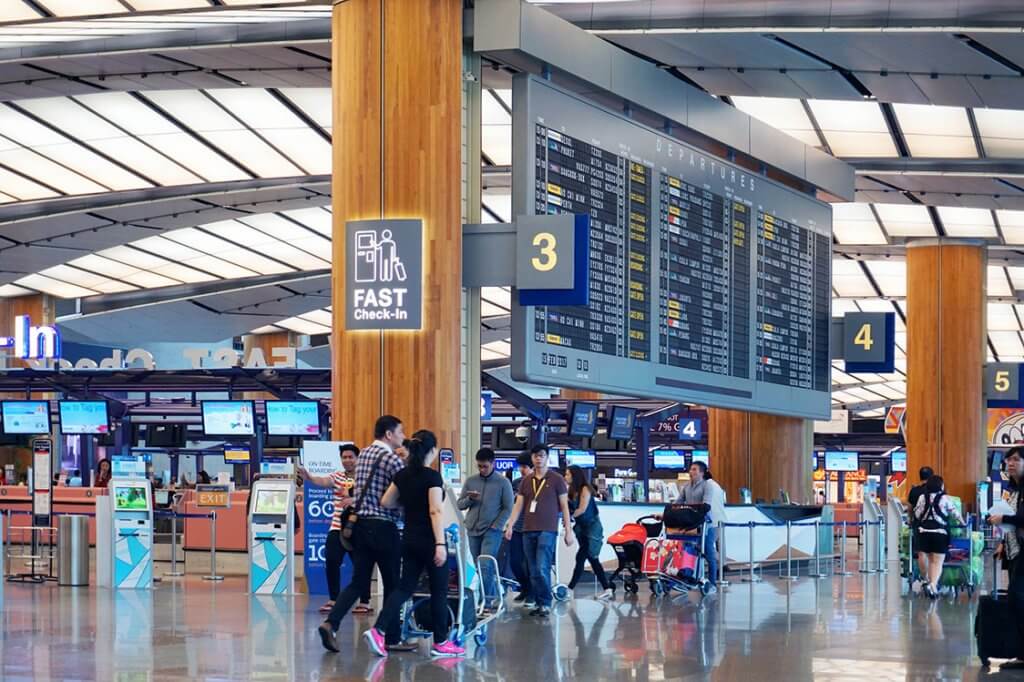 Seeing the possibilities in VPAs

Last year, MFA worked with a team of students from Singapore Management University under the SMU-X initiative—a scheme that gives undergraduates access to experiential learning by pitting them against real-world challenges. (Read also: The X Factor in SMU-X)

After watching a presentation by Amazon, where the speaker discussed the company’s Alexa virtual personal assistant (VPA), the team—consisting of SMU School of Information System students Bong Jun Hao, Thomas Thio, Claudia Foong, Ong Hong An and Phang Shi Jia—decided that a VPA could be one way to overcome people’s resistance to going through the registration process. 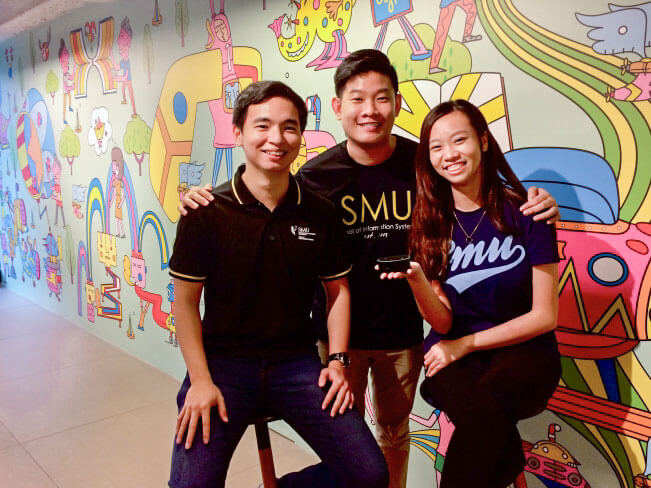 “We felt that with the VPA, the whole interaction could be simpler, faster and easier to use as Singaporeans would simply need to converse with the VPA to provide information on their travels and it would then be forwarded to MFA,” said Bong Jun Hao.

“No more typing or tapping on apps would be required, which would greatly increase the ease of convenience and remove this obstacle of laziness when it comes to eRegistering.”

As Jun Hao says, VPAs are being rolled out across phones, computers and ‘internet of things’ devices by technology companies. However, he says that there are still some substantial barriers to adoption. There are still many different interfaces, including Alexa, Microsoft’s Cortana and Google’s Google Home. 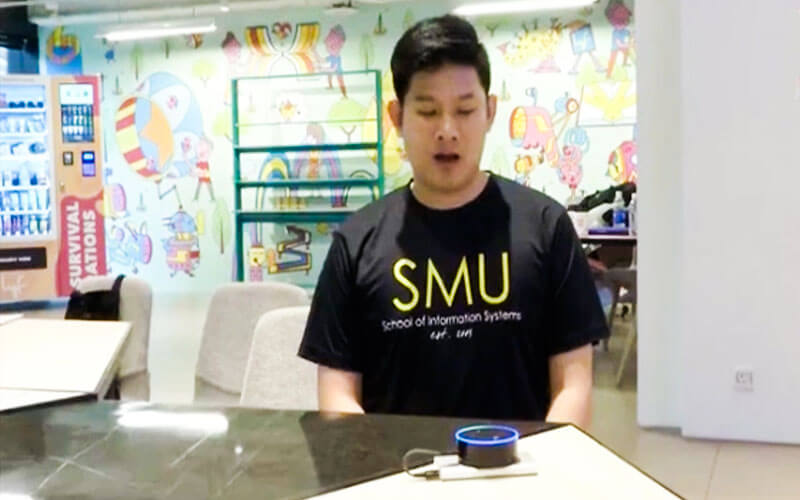 “For example, we trigger Siri with the command ‘Siri, …’ while Alexa is triggered by the command word ‘Alexa, …’. On the consumer end, there might be a lot of research required to figure out the various commands. It would be good if there could be a form of standardisation when it comes to the usage of VPAs,” Jun Hao says.

There are also privacy concerns about the personal information that a VPA might store, which is particularly relevant when sharing secure data with the MFA. There is also some way to go before VPAs can be relied on to understand all voices and dialects.

“For the case of eRegistration, would the VPA be able to reliably capture the speech of the users and translate them for storage as data, even if the user speaks with a heavy accent?” Jun Hao raises the concern. “But increasingly we feel that users are more open and accepting of VPAs, as the ease of usage, convenience and widespread availability in our mobile devices makes it very attractive.”

Successfully e-registering thousands of travellers would create its own problems. If a crisis were to happen, the MFA would have to juggle handling the immediate needs of the people on the ground, with making information available to friends and relatives at home.

“As more citizens go overseas, and MFA increases the effort to improve e-registration rates, we need to make crisis response more scalable,” says Roy Lee Kiat, a 2017 graduate of the SMU School of Information Systems who—together with teammates Janet Sim (School of Accountancy), Eugene Sng and Yvonne Liew (both from the School of Information Systems)—worked on another SMU-X project with the ministry. 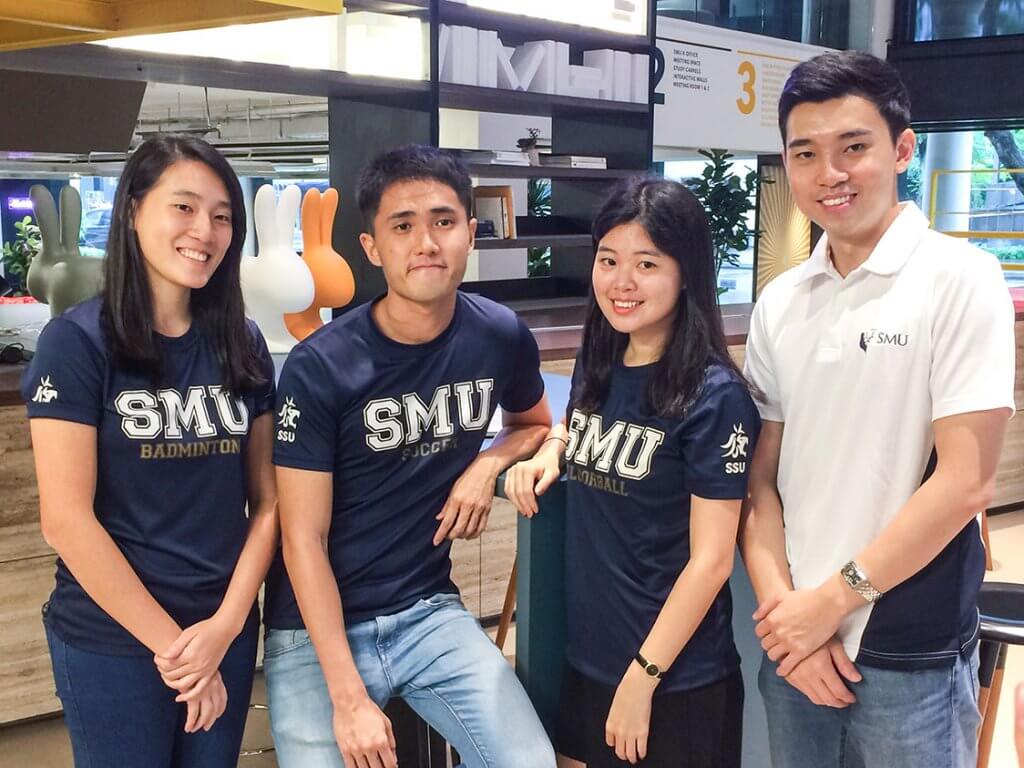 “The current process is rather manual, as officers reach out to citizens through SMS, email and personal calls. However, if a crisis situation arises in a region that has a lot of Singaporeans e-registered, MFA would need to be able to cater to more queries and provide more aid while manpower stays the same. Therefore, we look to technology.”

Roy said that MFA is widely praised for its consular services, largely because its consular officers are able to provide a human point of contact when people are in need of aid. Replicating this at scale is difficult, Roy says, so his team focused on trying to find ways to free up consular officers for urgent tasks, while automating those that could be handled with less human intervention.

The solution that they came up with was to use ‘chatbots’ that work on messenger apps, such as Facebook and Telegram—systems that users are already familiar with. This, Roy says, has the potential to reduce the volume of calls into the MFA switchboard during crisis periods, and to provide some of the elements of human interaction that users want. 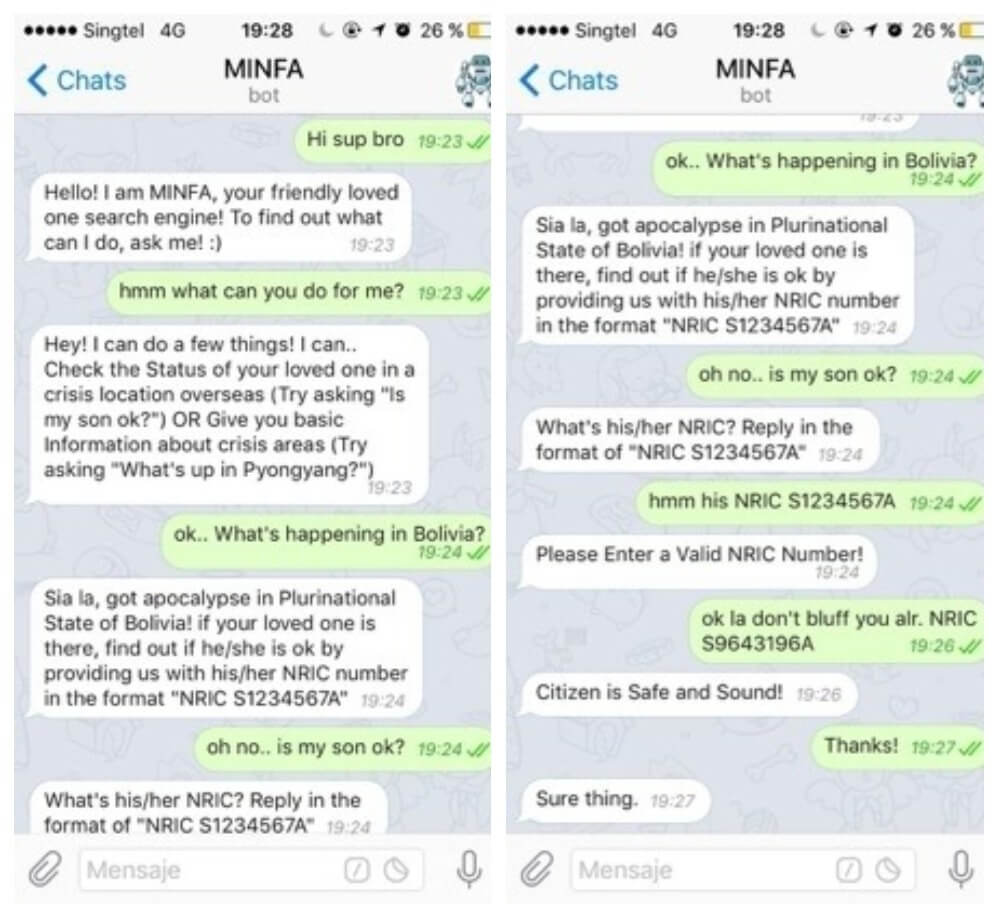 “Chatbots have great natural language processing abilities nowadays such that it is able to recognise the intention of the user whichever way the user phrases a question,” Roy explains. “It is also able to engage in small talk easily, and can make use of various software components to further its knowledge or ability.”

Modern chatbots can access data about weather patterns, or search for information about a crisis-hit area.

Roy says that he does not expect chatbots to have the kind of complex interactions that a consular officer might have, but to have more predictable conversations—for example, supplying the phone numbers of an overseas consulate to a next of kin, or letting them know whether or not their relatives are receiving consular assistance. That would allow MFA’s manpower to be directed to offering citizens medical advice overseas, and other more urgent functions.

As artificial intelligence (AI) develops, chatbots could even surpass human interlocutors for some functions, Roy says. The more information that an AI is able to absorb, the better it is able to perform its role.

“Governments and businesses need to be daring in taking a step forward to make use of these AI technologies, as the first mover advantage would include more data and smarter decision making by the AI down the road, and that will provide a competitive advantage for the Government organisation or business,” he says.

“Users will, in turn, become more receptive towards such technology as the more they engage with such technology; the AI becomes smarter, and more useful to the user. In the future, the user might even opt for an AI as compared to a human officer, as the AI appears to be able to reply faster, and carries much more knowledge.”

Find out more about SMU-X initiative.