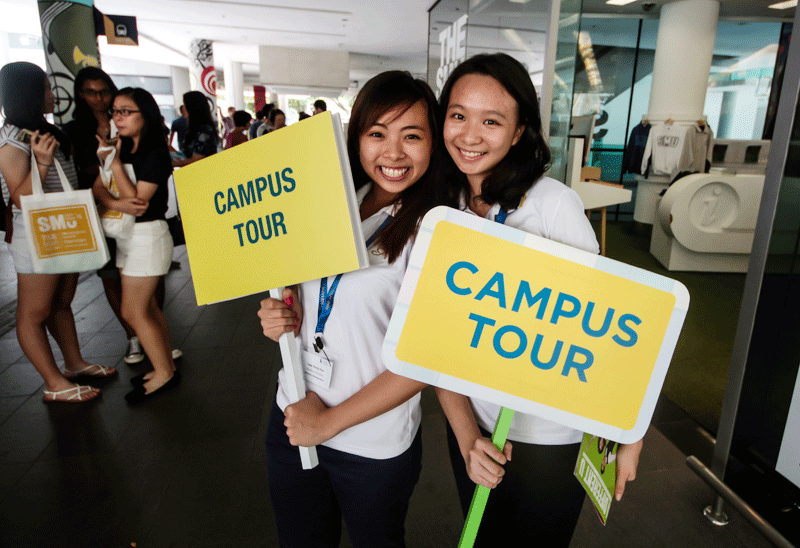 We don’t call ourselves “A Different U” for nothing: SMU is the only university in Singapore that gets to kick off its Open House with a percussion and modern dance performance in the heart of Singapore’s Downtown Core!

Bright and early on Day 1 of Open House 2015, Samba Masala and Indancity put up a rousing performance just outside the Administration Building, combining their respective specialities of samba beats and contemporary dance. So loud and proud were they that a sizeable crowd gathered to watch: not just SMU’s staff (including university president Arnoud De Meyer) and students, but also random passersby and tourists. 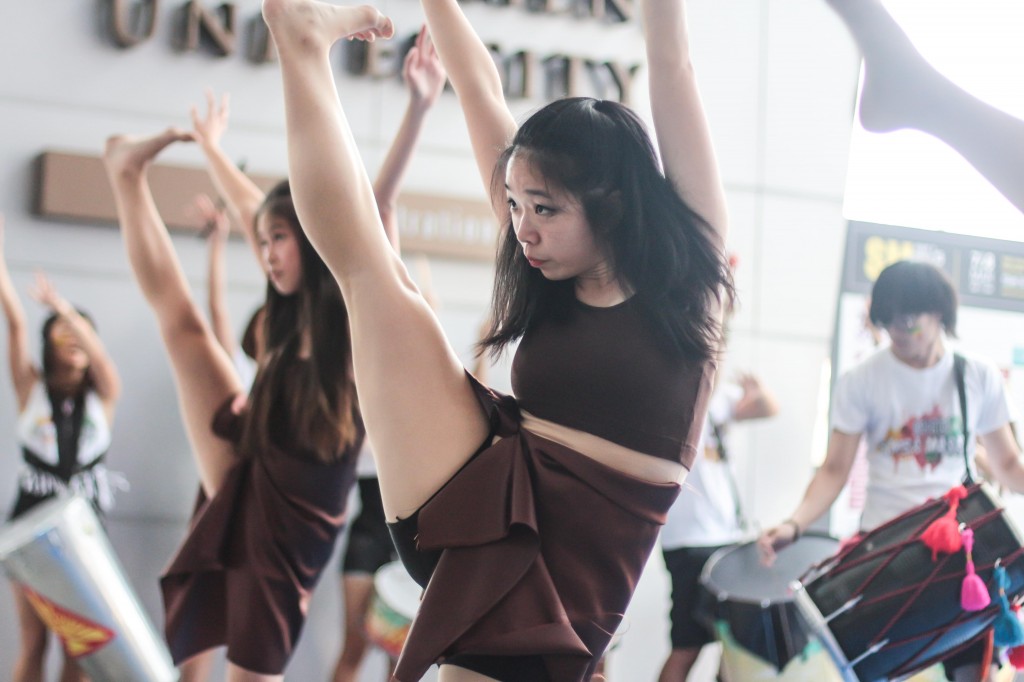 Together, Samba Masala and Indancity put up a power-packed opening performance that thrilled all who caught it. 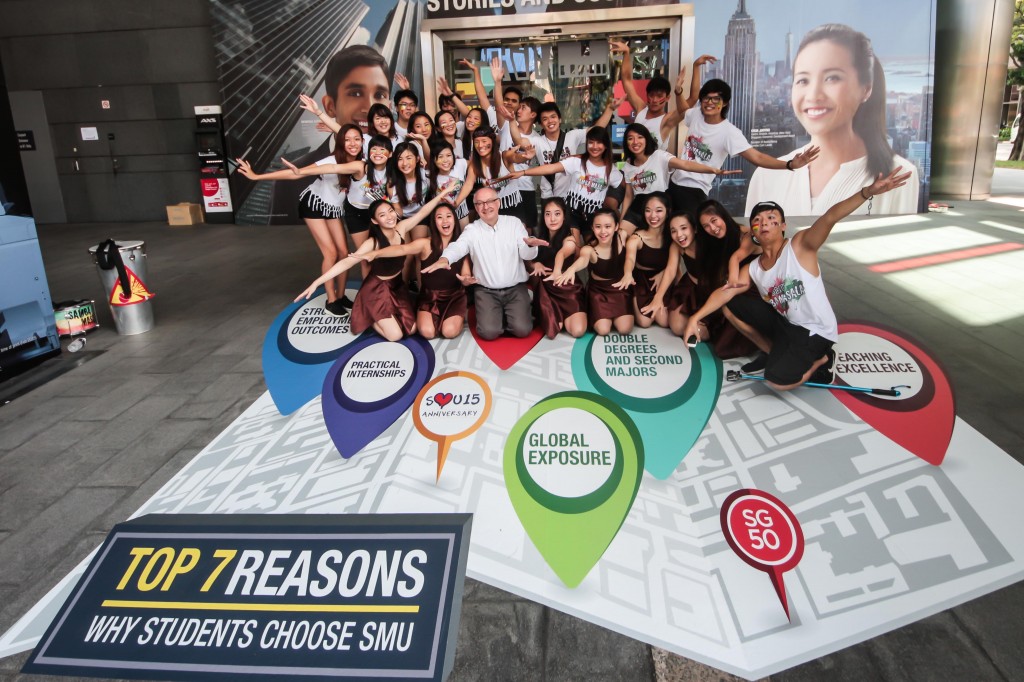 President Arnoud De Mayer, together with all the performers who kicked off Open House 2015.

While this was going on, more crowds began gathering underground at the T-Junction in the Concourse, where an array of booths awaited prospective students and a small army of staff and students were on hand to answer any questions. Campus tours began shortly after, at 11 am. Our SMU Ambassadorial Corps led hopeful incoming freshmen as well as their parents on a tour of the university’s best-loved facilities, including the Li Ka Shing Library and the Mrs Wong Kwok Leong Student Wellness Centre. Also on the tour agenda was SMU Labs, which amazed our guests with its innovative and student-friendly features. 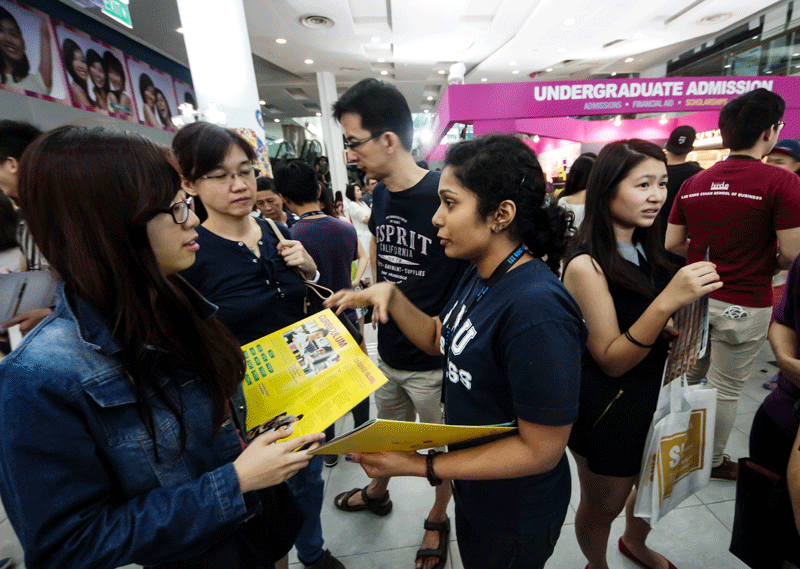 Believe it or not, this photo was actually taken during a lull period. (When the T-Junction was completely packed, photo opportunities were basically impossible!)

Throughout the day, talks were held by SMU’s schools and offices, in four locations across two buildings. The schools of Accountancy and Law alternated time-slots at the Ngee Ann Kongsi Auditorium in the School of Accountancy building, while the Administration Building hosted talks by the other four schools as well as additional talks on admissions matters, career services and global exposure opportunities. Nearly every talk was packed full — besides JC, polytechnic and other high school students, the audience also included parents who were very interested in finding out how university education has evolved since their day. Many came with great questions for our senior faculty members, and also stayed behind after each talk to chat with faculty, alumni and current students about their respective SMU experiences. 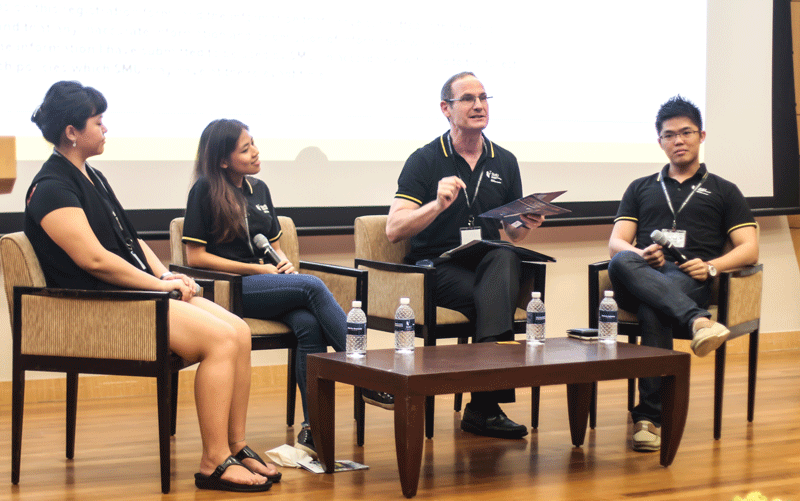 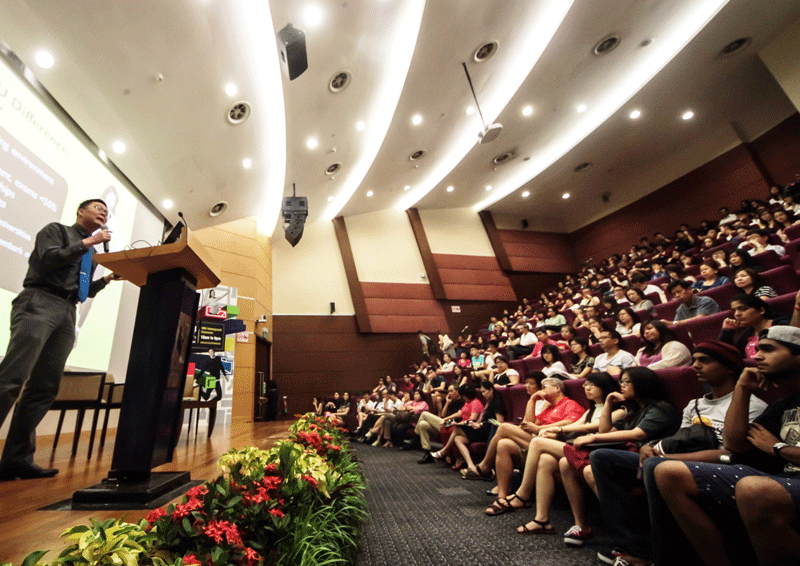 All the venues were full during each scheduled talk, and many attendees came armed with questions for the presenters and panellists.

Overall, the turnout for Open House Day 1 was quite amazing: you couldn’t get through the T-Junction without saying “excuse me” at least half a dozen times. To provide a little respite from the booth crowds, our CCA clubs showed up in full force. While some CCAs set up booths, others took part in a stellar line-up of gigs at the SMU Live! stage further along the Concourse, opposite Pastamania. The morning’s edition of ‘SMU Live!’ featured a mix of culture and martial arts: SMU Komunitas Indonesia started the ball rolling, followed by the Kendo and Wushu groups and the SMU Chamber Choir. The afternoon proved to be an extravaganza of talent; in particular, the crowd went wild when Caderas Latinas showed up to burn the floor with their sizzling salsa moves. Though the stage may have been small, it was more than enough to hold SMU’s massive amounts of performing talent! And throughout the day, emcees from SMU Broadcast and Entertainment kept the programme flowing, like the seasoned pros that they are. 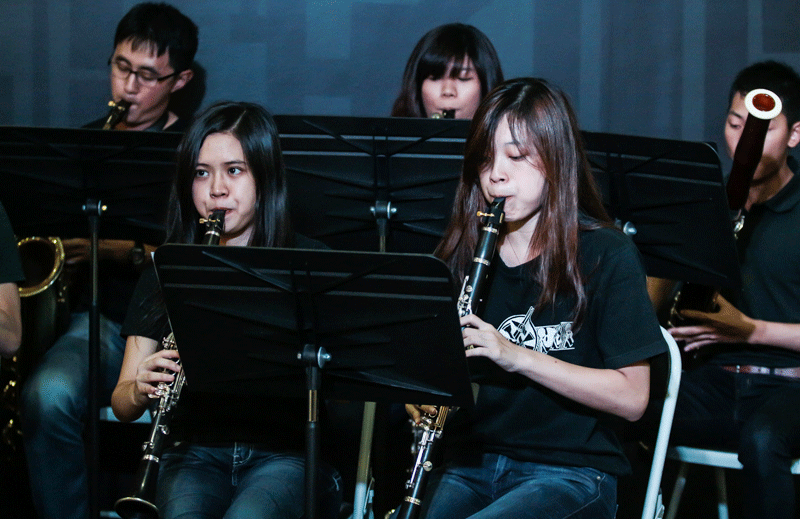 SMU Symphonia treated us to a series of musical performances by their various sections, including the Overture to the Barber of Seville. 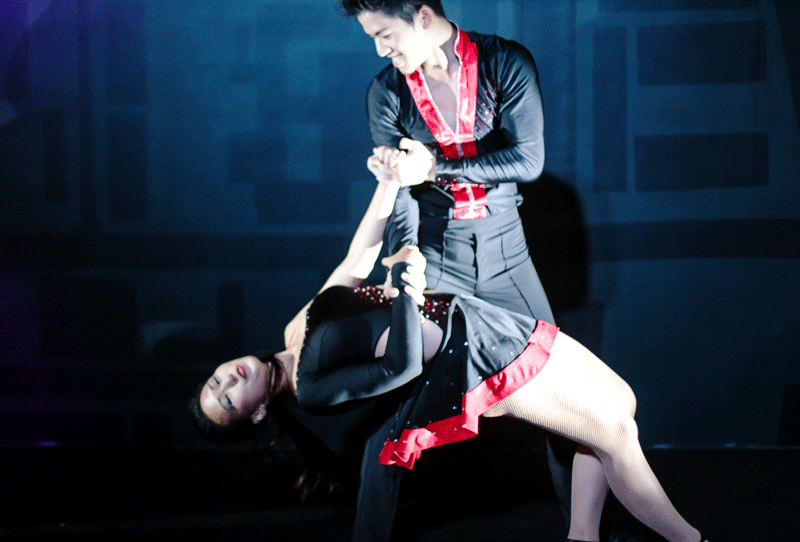 Always a crowd-pleaser, Caderas Latinas fired up the crowd with their sizzling salsa performance.

This isn’t meant to be a full recap of Open House 2015, especially considering how much was going on all day!
Catch the highlights in the video below, and be sure to make it down for Day 2 to find out how you can transform into a different U!