We Are Samba: A Sambista’s Guide to the Universe 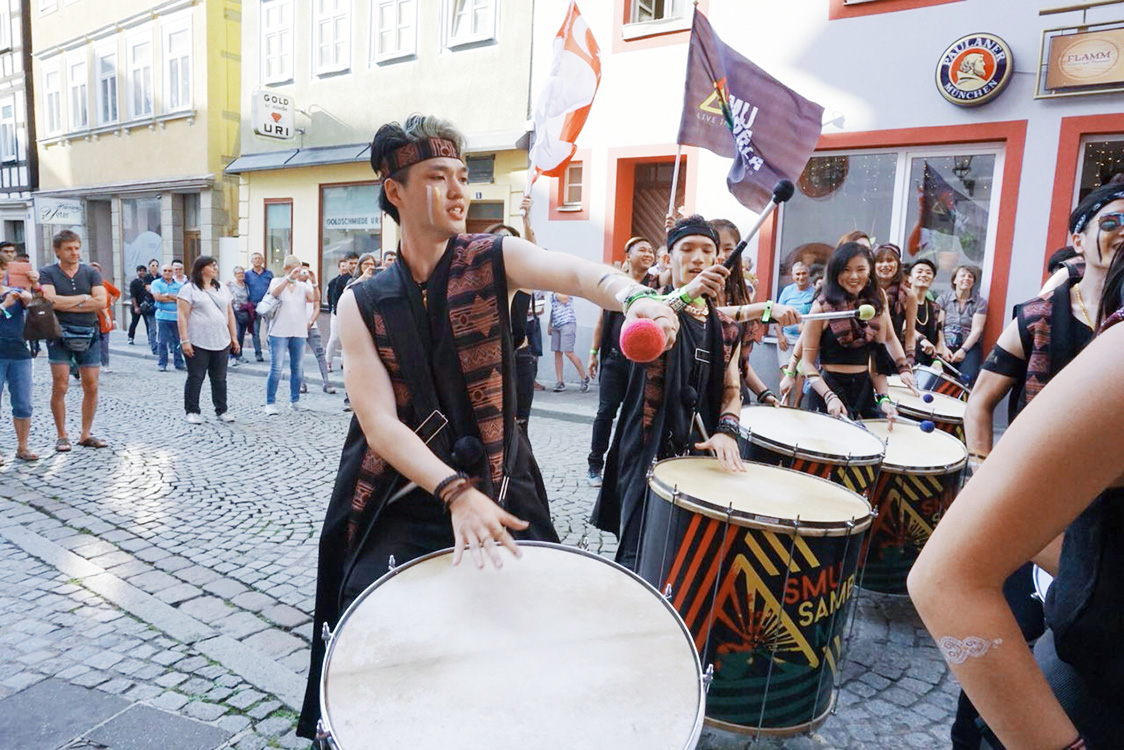 Three weeks, three cities, two cultures that couldn’t be farther apart. It has been almost a month since SMU Samba Masala’s return to home soil, after a fortnight-long festival tour in Berlin and Coburg, Germany and a gig—in collaboration with the Ministry of Education—at Guiyang, China. While I haven’t had much time to recuperate physically, the writing training from my summer internship with Shopee has more than prepared me with the words to articulate this life-changing experience.

Samba Masala’s latest escapades presented many firsts. It was the first time most of us had performed overseas, and it was the first time our EXCO had to manage the full band in a foreign land. We were also representing the school and country; and in the Germany tour’s case, Samba Masala was the only band representing Asia to perform at the festival. 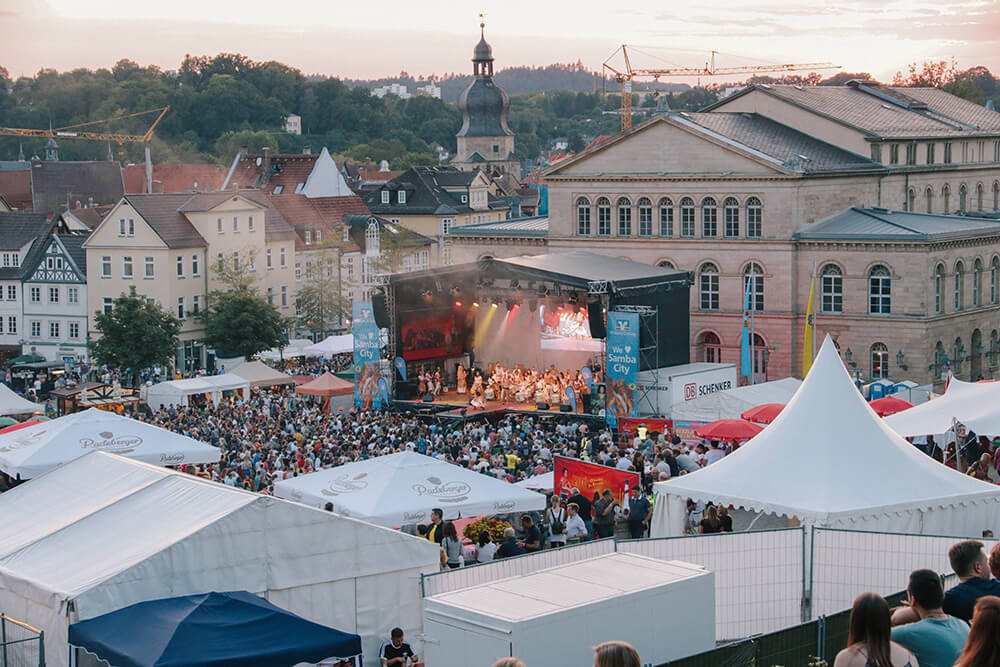 Jetting across three cities in three weeks is much like getting thrown into the deep end of the pool in extreme temperatures—it’s not great for health, and the differences in culture and the way things are run is overwhelming, to say the least. The attitudes of locals towards a new genre of music, for instance, varied greatly. In Berlin, we received rousing support from complete strangers when we pulled off a simple busking set on the streets of Alexanderplatz, but only got a cordial smattering of applause when we performed an elaborate collaboration piece with SMU Malay Language & Cultural Club in Guiyang. Professionalism calls for bringing your best to the stage regardless of your audience’s reactions, but it’s definitely a lot easier in Europe with its abundance of positive affirmation, which makes all the difference to a performer. 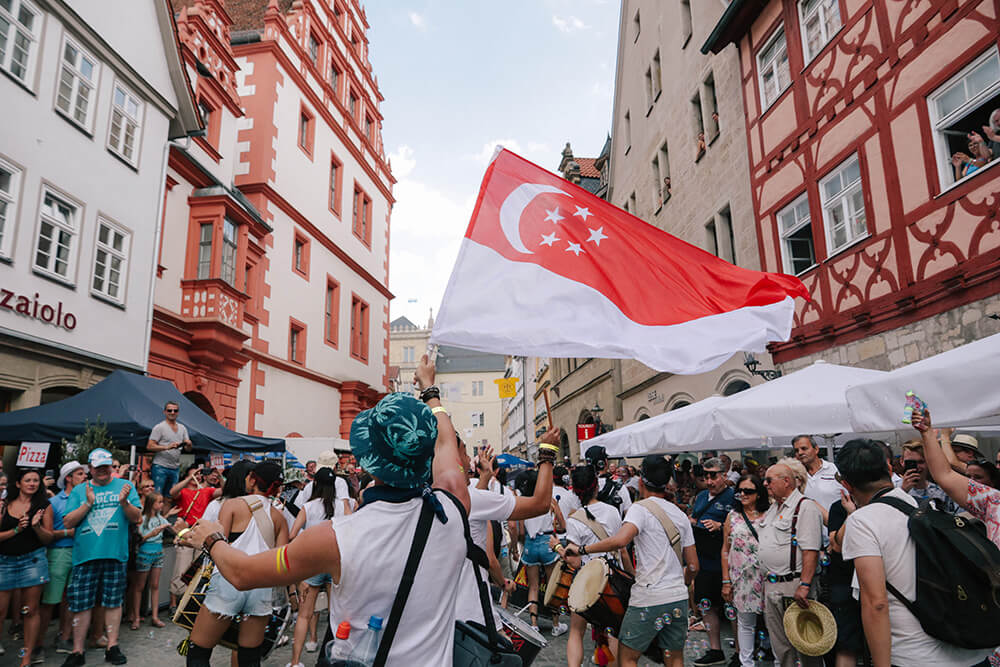 Flying Singapore’s flag high, Samba Masala parades through the streets on the last day of the festival

There were plenty of takeaways as a leader as well. Samba Masala was my first opportunity to prove my worth on the world stage, but while my focus was on making the band look great on stage, there were instances where I neglected the core of the band: its people. There was no shortage of love lost during the trip due to my inability to balance the cause and its crusaders. Having to manage an even larger group of stakeholders during our gig in Guiyang, including the needs of VIPs, proved to be even more trying for an already tough balancing act. Thankfully, the band was supportive and forgiving, and I emerged from both trips a better leader, and more importantly, a more empathetic person. 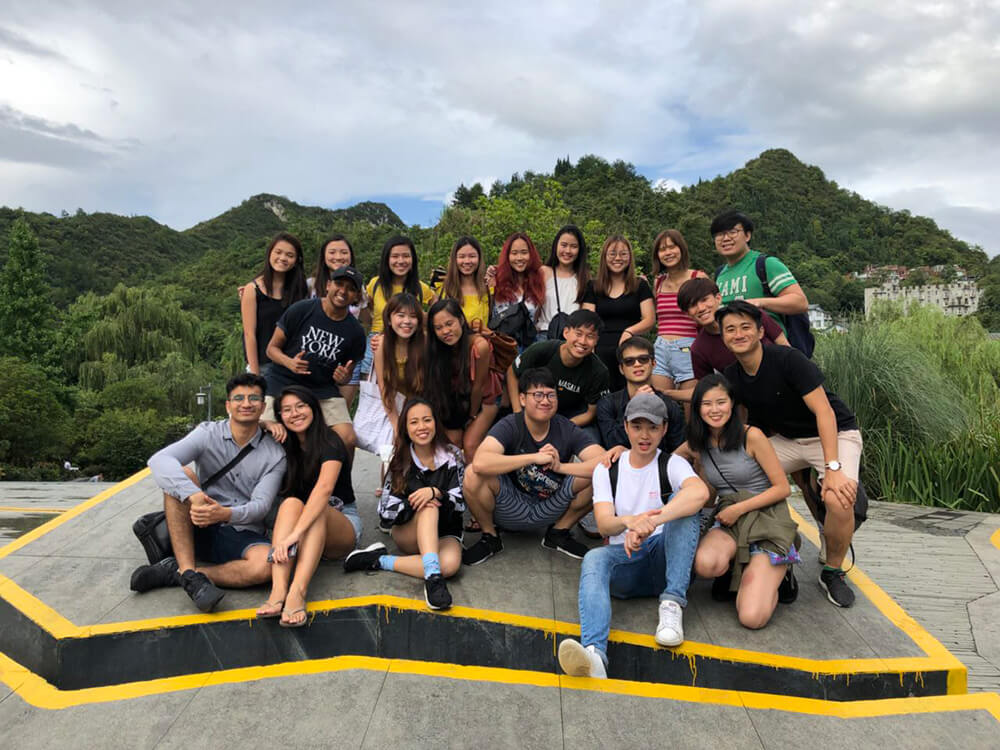 Samba Masala and Malay Language & Cultural Club take in the sights and sounds of Guiyang, post-performance

The last takeaway deserves a backstory. On the day before the festival in Coburg, I bumped into a fellow sambista named Yuri. Born in Brazil, the true home of Samba, he currently plies his trade in Sambiosis, a samba troupe based in Spain. Through our numerous conversations in the dormitories and backstage, he expressed his pride and appreciation that people around the world were taking original Samba arrangements, adapting them, and revolutionising the art at such a high and technical level. I remember vividly something he said as we walked back to the artiste tents together after a stage set, “This is my culture, but you guys are making it beautiful and better.”

Bonding over a common genre of music, revelling in the depths of culture it represents, and truly immersing oneself in a world outside of your own is an experience no typical student exchange programme can offer. There’s no feeling quite like jamming to a common rhythm, learnt almost 12,000 kilometres apart, but played perfectly unison. There were performers from Sweden, Finland, France, and Colombia, but for that brief moment, we were all Samba. 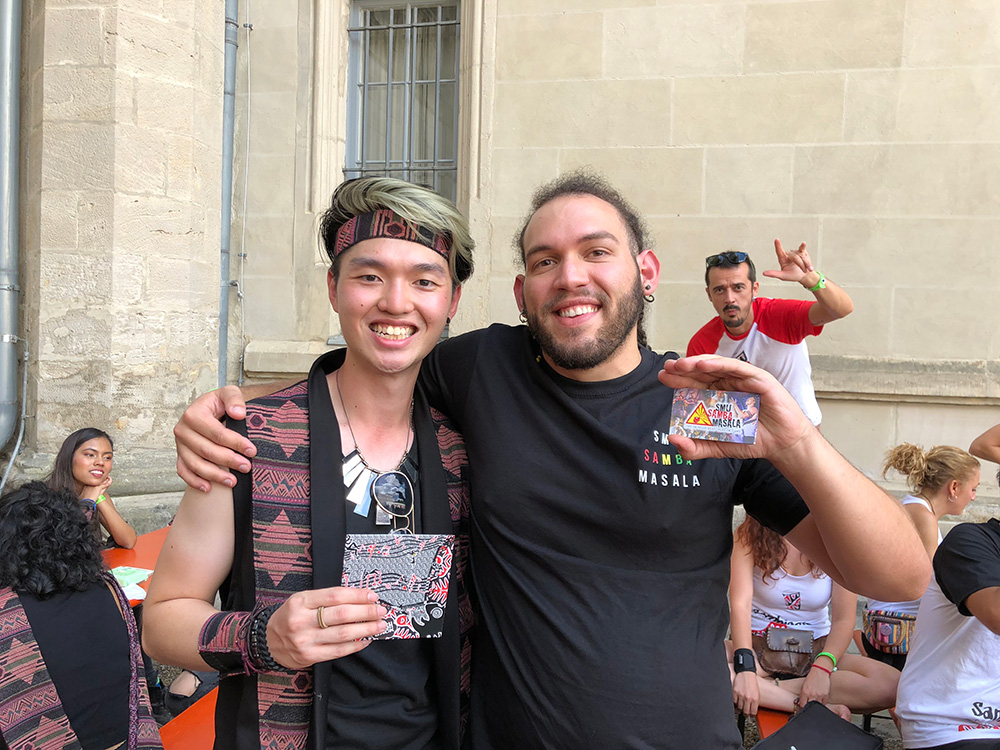 This very same euphoria even managed to break the rigidity of China’s regimes. During our rehearsals in Guiyang, the director orchestrating the opening ceremony was stiff as a rock—methodical, unyielding, and very intimidating. After hours of barking orders at flustered subordinates, he watched our set and cracked a wry smile. It wasn’t long before he was asking to try out our instruments, demonstrating the percussion chops no one knew he had before. Samba had unlocked the hidden rainbows he had suppressed, and connected us through a common love for percussion music. 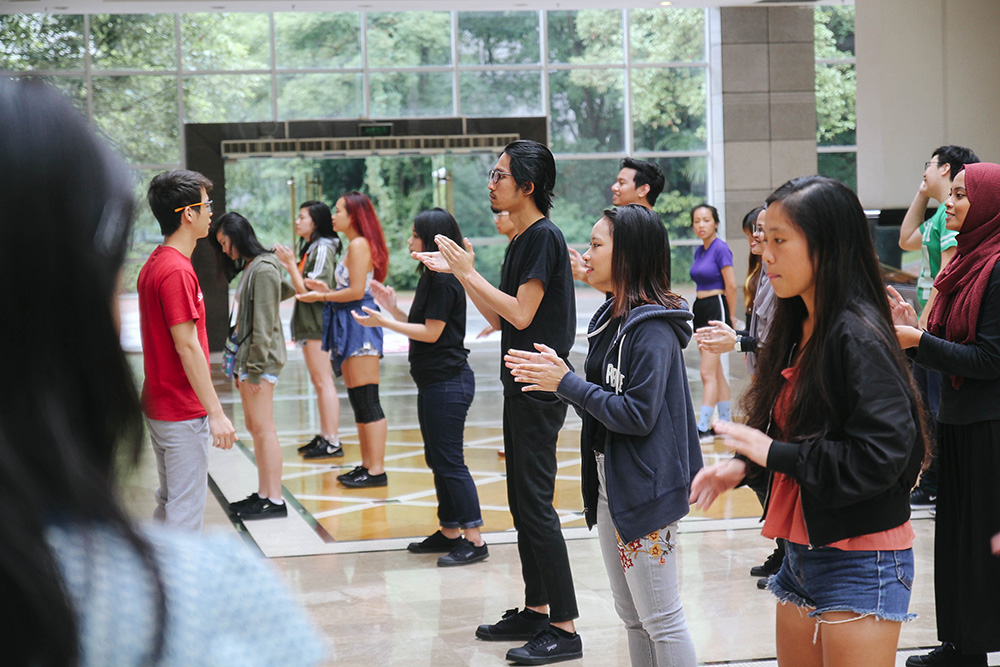 The band squeezes in some last-minute practice before the performance

Performing on the global stage is a privilege that few get to enjoy, and I’ve had the luck to do it twice! Being a performer, a leader, and a representative of something so big is a huge honour, and many people deserve due credit for making this dream a reality: our instructors, the SMU Office of Student Life managers, and countless other individuals behind the scenes who’ve given us aid, advice and affirmation. This experience has reshaped Samba Masala and its members for the better, and I am glad that the band has stepped up and proven itself to be world-class performers once again. 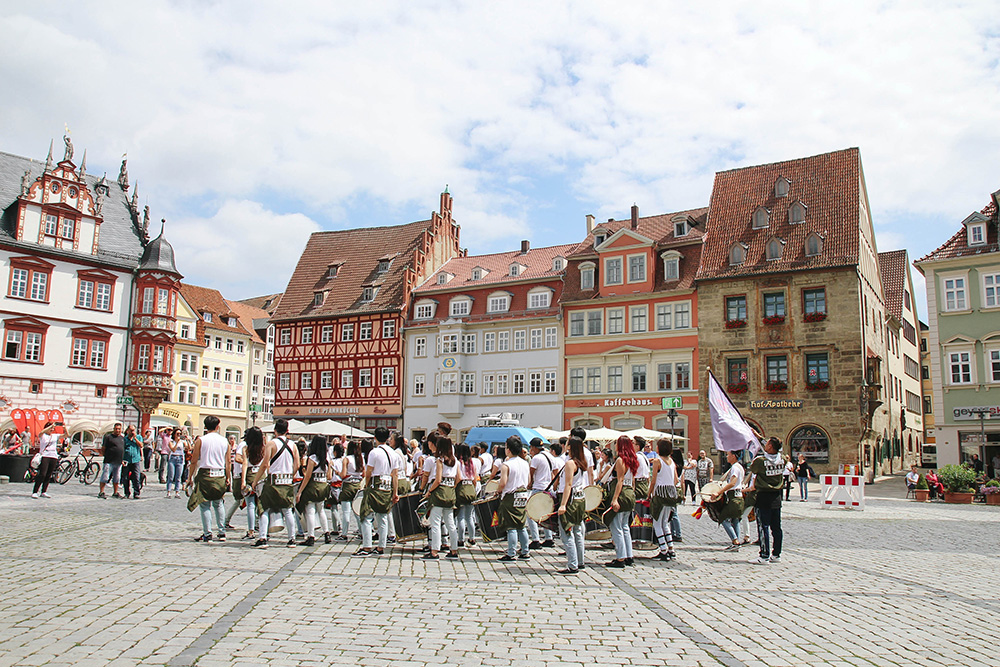 [All images courtesy of the SMU Samba Masala marketing team.]

SMU Samba Masala’s first post-world tour act will take place on 15 September, as the band explores the dilemmas between going down the beaten path and pursuing an uncertain passion. Ticket sales for Samba Masala’s production, Dive, at the SMU Arts Festival 2018 are now on sale! Grab them early, as limited seats are available.

They Verify Crowdfunding Campaigns to Make Sure Your Money Goes to a Genuine Cause
Fake News is Killing Traditional Journalism: How the Publishing World is Fighting to Regain Trust and Transparency