Project Unsung Heroes 2015: showing our gratitude where it counts 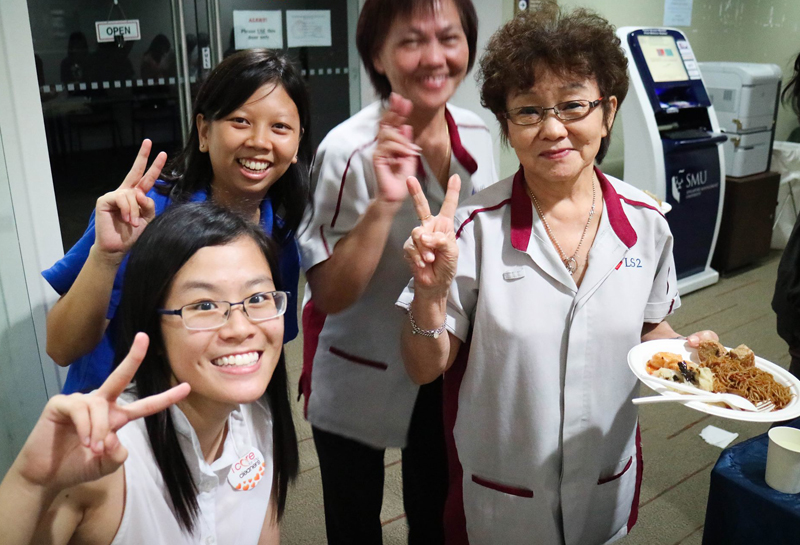 The Special Interest and Community Service Sodality (SICS) is a student-run constituent body that manages 25 of SMU’s co-curricular activity clubs (CCAs). One of SICS’ clusters is the Community Service cluster, which consists of six clubs: BP Mentoring, Caretalyst, Habitat for Humanity, Red Cross, Rotaract, and Uni-Y. These community service clubs seek to improve the welfare of our community by supporting and spearheading community service projects. They also provide SMU students with multiple platforms to reach out to society’s less privileged.

In the second half of 2015, the six clubs collaborated on a meaningful effort which focused on SMU rather than external beneficiaries. Read on to find out more!

As a final-year student, I’ve spent almost four years on the receiving end of our janitors’ daily tireless efforts in contributing to the cleanliness of the school. To be honest, we tend to be so caught up with schoolwork, meetings, and classes that we often take no notice of these unsung heroes – members of our SMU community, who put in considerable effort to make our campus a clean and comfortable place to work and play.

It was in early 2015 that I first came up with the idea for a project that would give my fellow students the opportunity to reach out to these often under-appreciated members of the SMU family. I worked with the others in the Community Service Cluster to brainstorm an event where our fellow students could join us in connecting meaningfully with the janitors, and expressing our gratitude to them. 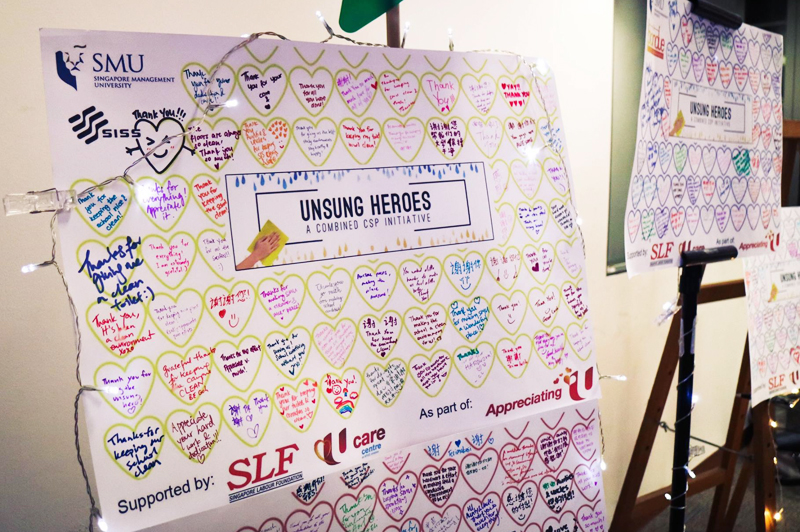 Our project encompassed two parts: a pre-event booth to collect messages from the school to the Unsung Heroes while raising awareness about this project, and an appreciation event including karaoke and a short massage session for the janitors. Eventually, due to time constraints, we decided to go ahead with a karaoke session and a buffet lunch, where the students would serve food to the janitors and spend time eating and chatting with them. We also collaborated with our sponsor, NTUC U-Care, to prepare and give out goodie bags to the janitors, containing practical items such as Salonpas and coffee.

From our initial discussions in January, we realised that this project would require a lot of coordination and planning – as well as stakeholder engagement – in order for us to do it properly. As such, we opted to hold the event during the following semester, so that we would have more time to carry out the necessary groundwork. We also decided to focus on one particular group for the first year – the janitors – before expanding our efforts to appreciate other unsung heroes.

Together with the rest of the project committee, I talked to our janitors at their resting areas during the summer holidays. We took advantage of the smaller crowds on campus to connect with them, to find out their thoughts on the activities that we had in mind for an appreciation event.

With the input of our unsung heroes, we designed an event that best suited their needs. We originally planned to hold our appreciation event at the Administration Building after the end of the janitors’ shift, to ensure that we could spend more time with them. However some of them shared that they would prefer a lunchtime event, so that they could get home on time after their shift ended. 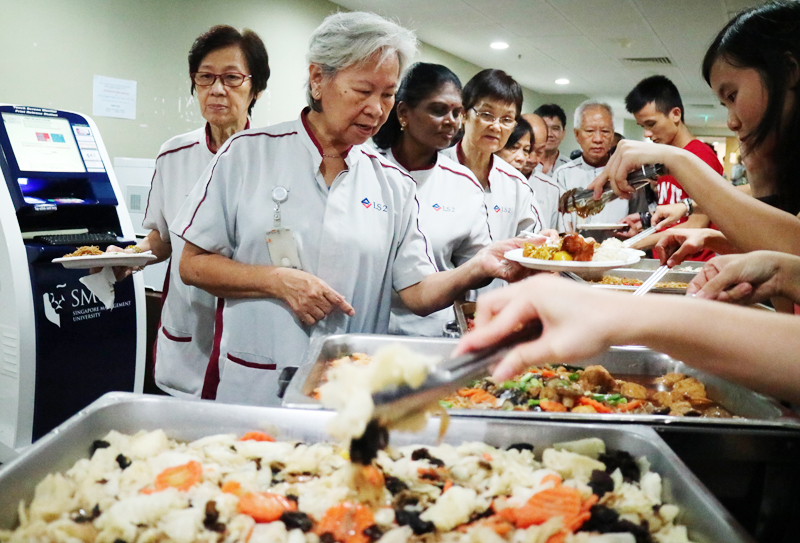 The janitors also highlighted that the Administration Building was not a convenient venue for some of their colleagues who had difficulty walking longer distances. This prompted us to hold the event at the Business Communication Labs in the Concourse instead. Their feedback was extremely helpful as it prompted us to consider their needs and tweak our intended activities accordingly.

When the school term started, we had already put in place most of the arrangements for the appreciation event. We then continued our outreach by frequently visiting the janitor office: to speak to the janitors, distribute forms for them to indicate their attendance, and encourage them to come.

It didn’t take long for their enthusiasm to spread: some assured us that they would inform everyone else about the event on our behalf, and they were as good as their word. During our visits to their office, whenever other janitors came in to sign out at the end of their shift, their colleagues would remind them about the event even before we could speak up! This word-of-mouth publicity was far more effective than anything we could have done on our own.

At our pre-event booth, over 200 students and staff came forward to write their messages for the unsung heroes. Most came to know about our project through emails sent out by all the community service clubs. Their response was a great encouragement to the committee, as our peers told us first-hand that they found our project amazing and encouraged us to keep up the good work. Some students also asked if they could be involved in this project despite being unable to make it for on the actual day of the event.

The appreciation event was held on 4 September, and was attended by 43 janitors and technicians, 17 students as well as staff from the Office of Student Life. Initially I only expected about 20 janitors to attend, and was so glad and heartened by their eventual response. Although we had expanded the guest list to include technicians and security guards, the guards were unable to join us for lunch, so we packed lunchboxes for them which we gave them along with the prepared goodie bags. 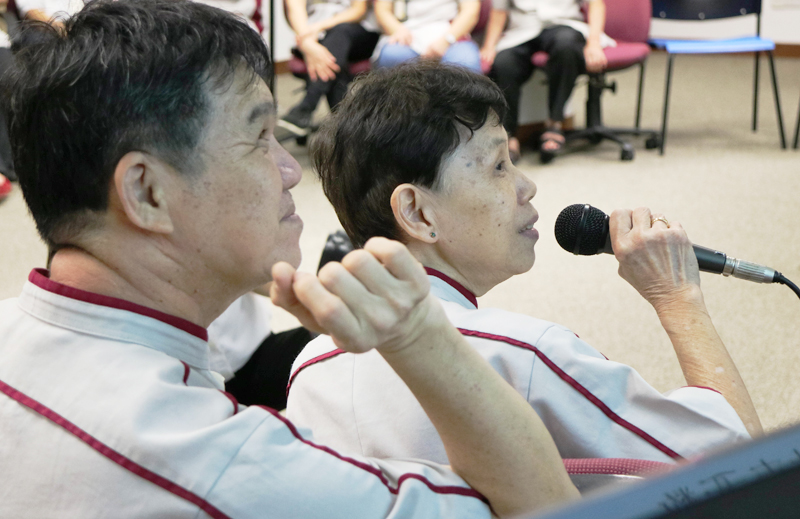 The event was emceed by volunteer hosts from SMU Broadcast and Entertainment (SMUBE). We played games including Don’t Forget the Lyrics, with songs that the janitors are familiar with. Kee Xuan Yi, who is the current president of SMU Red Cross, shared that the singing was a great way for the students and janitors to bond. “We encouraged them to sing along when they felt shy to open up to us initially, and the event became more lively as more janitors and technicians joined us in the singing after a while,” said Xuan Yi. “This was really different from what happens on a daily basis, since the janitors seldom interact with students. We enjoyed chatting with them on various topics and they seemed to enjoy the conversations too.”

We also screened a video of the students who had dedicated messages to the janitors. They were surprised that we had set up a booth for this purpose; some had noticed the booth in the Concourse, but did not realise that the students were writing messages for them. They were truly touched by the messages and the event, and even asked if we could get together in this way once every three months.

Overall, I would say that this project has exceeded the committee’s expectations. In providing a platform for our fellow students to recognise the janitors’ contributions and services to our community, we’ve conveyed the message to our unsung heroes that we care about them.

Just as importantly, we’ve also helped to sensitise the rest of the SMU community to the role performed by this group, and the need for us to show our appreciation to them on a day-to-day basis (not just once every three months!) Lim Yee Khang, the vice-president of SMU’s Rotaract Club, shared with me how glad he was that we took up this project: “It gave us the opportunity to thank our unsung heroes on a personal basis. Though they may be ordinary people, they perform simple, sometimes dirty, yet extraordinary tasks that made SMU a more conducive place to study in. As they shared their work experience with us, I’ve learnt to be more appreciative towards the hard work they have put in.” 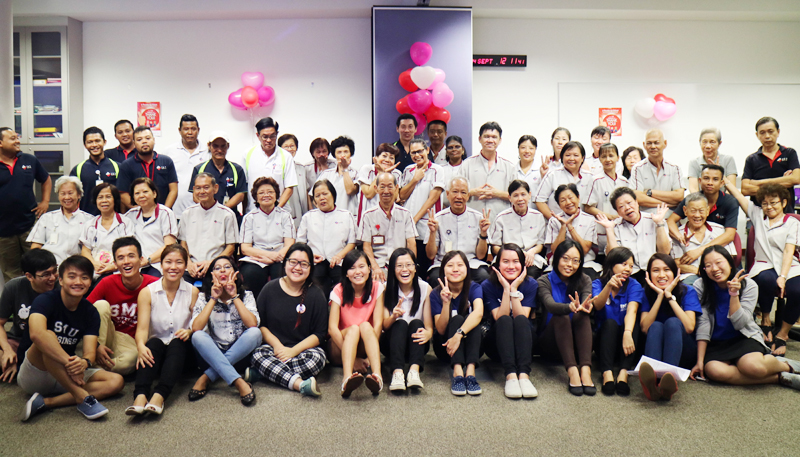 On my part, I have also gained a greater sense of care towards the seniors in our society, and I feel more strongly than ever that they are people to be respected and appreciated – and not overlooked. Through the successful running of this project, I’ve come to realise that we can and should appreciate our unsung heroes in both big and small ways. Buffet meals with fun activities are just one way to show our appreciation. Simple day-to-day actions – such being more mindful of our activities that generate mess or waste, or simply by greeting our janitors when we see them around –  can be equally effective in showing them that we care.

My SMU MBA adventure (Part 1)
ASMU Blog: A Different U