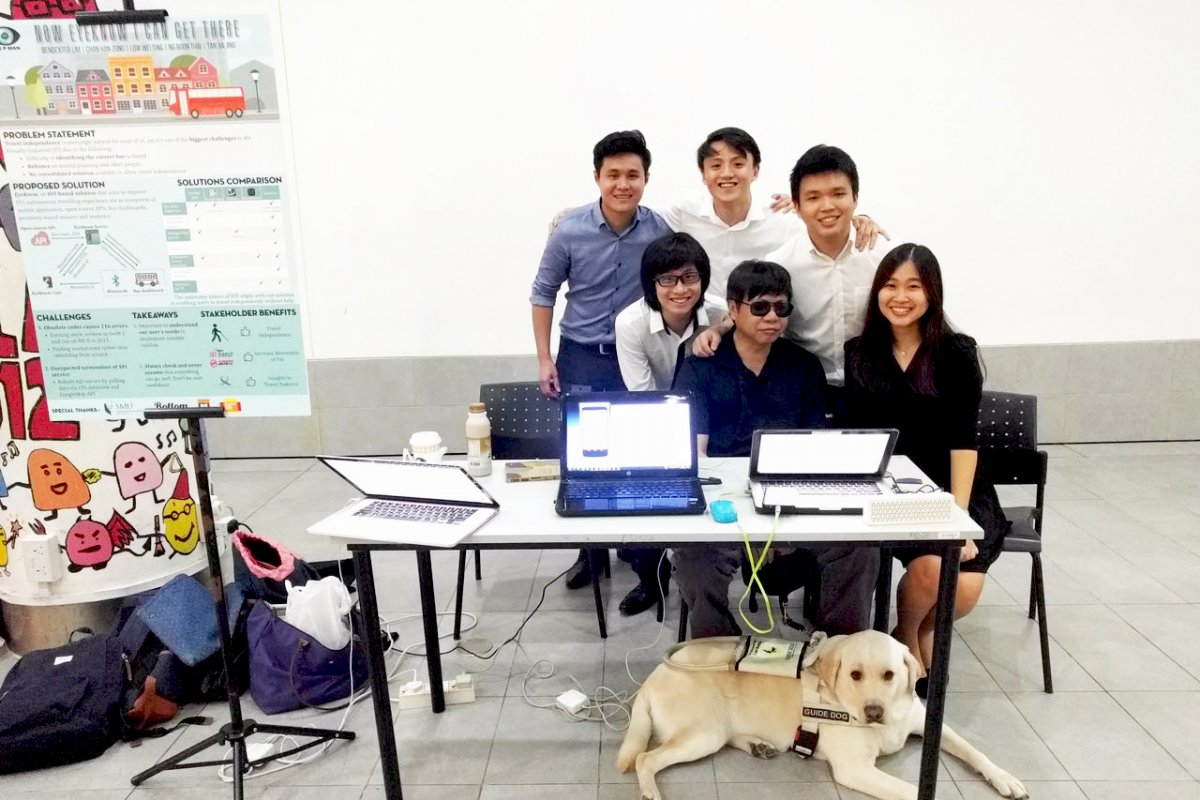 With rapid changes in technologies, nature of jobs and market demands, the world is calling for a new breed of professionals who are able to leverage on IT skills to create innovative solutions for business and society. In fact, SMU’s School of Information Systems (SIS) has recently introduced a newly revamped curriculum and a new Smart-city Management & Technology major, to help its students become industry ready, innovation enabled, solution architects.

One key sector that is experiencing this digital shift is healthcare. It’s no secret that technology is transforming healthcare—from the use of big data to ensure better diagnosis and treatment, to connecting doctors with patients, to helping patients stay fit and healthy. The pace and breadth of innovation is dizzying.

The healthcare sector appears to be the natural home for millennial tech-savvy social innovators who are motivated more by purpose than profit, to harness new technology to develop solutions which address a specific human need. SMU SIS undergraduates are behind two such start-ups, developing technologies which are enhancing the lives of others. 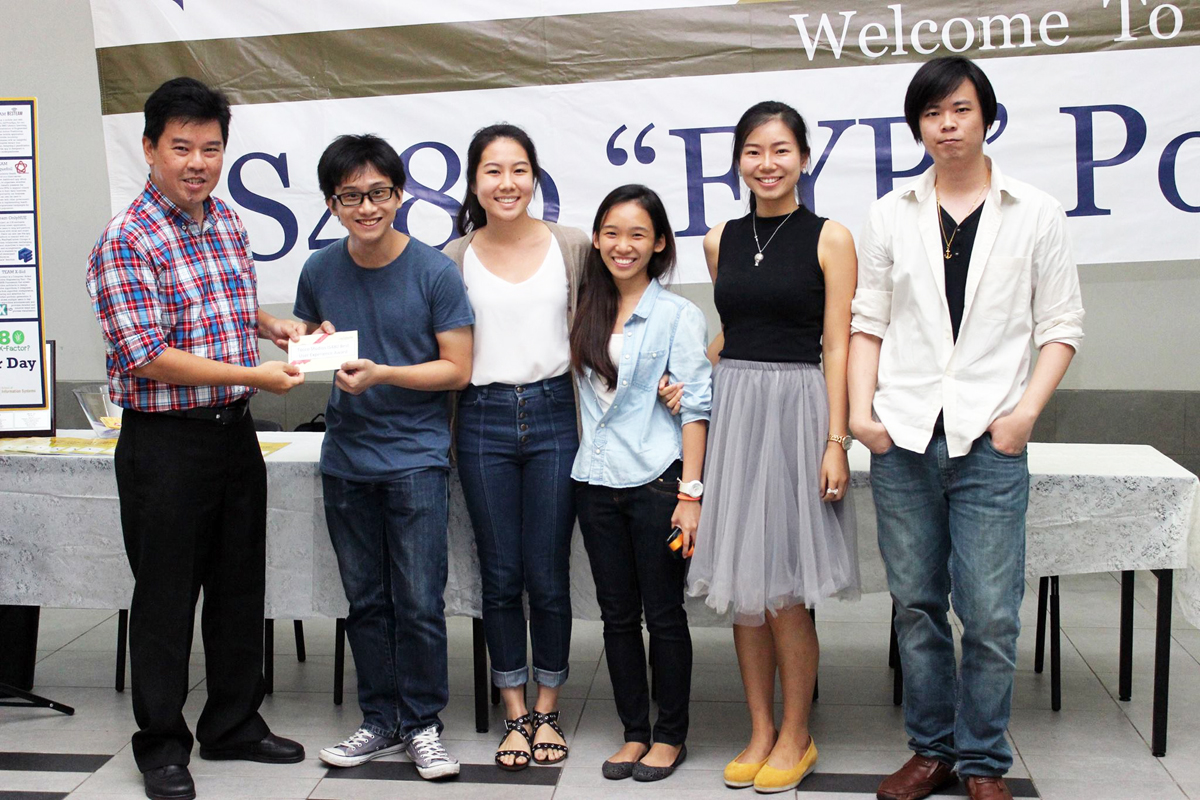 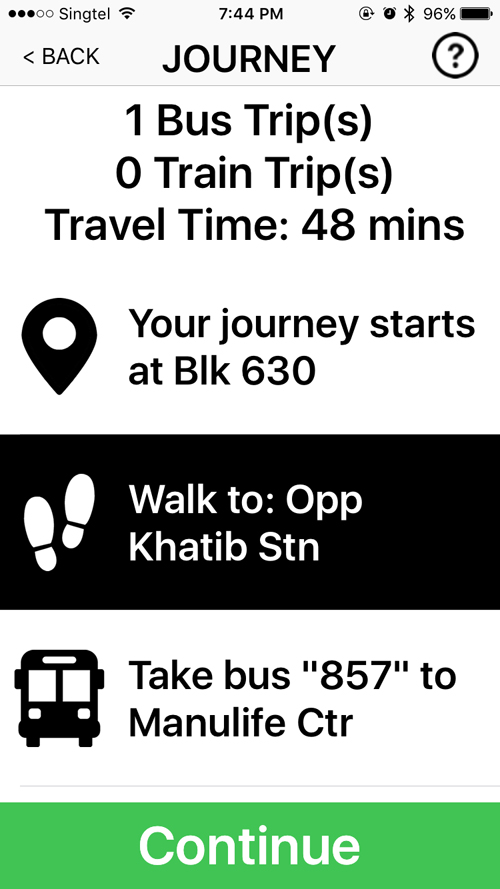 Screenshot of the TrAVEl app

The TrAVEl app was developed by Boon Thai and his SMU student team in conjunction with Ngee Ann Polytechnic ICT. It comes with a user-friendly interface including outsized icons. It’s also voice-enabled to guide the visually impaired user throughout every stage of a bus journey. Using GPS, the app recommends a bus route based on the traveller’s origin and destination. Once on-board the bus, TrAVEl sends updates throughout the route and sounds an alert when the destination is reached so the user knows when it’s time to get off.

TrAVEl took around a year to develop and is still being refined. During the beta phase it became clear to Boon Thai and the team that it needed something more, “after numerous rounds of testing, there was still an issue that the application could not solve on its own, and that is to inform the user when the bus has arrived,” explains Boon Thai. It seems LTA data on bus arrival times alone was not sufficient to ensure the visually impaired would board the correct bus. So they began work on an extension to the app, known as Eye-know, which sends an alert to the bus driver that a visually impaired traveller is waiting to board, and also sounds an alarm on the user’s mobile device when the correct bus has arrived and is directly in front of him or her and ready for boarding. 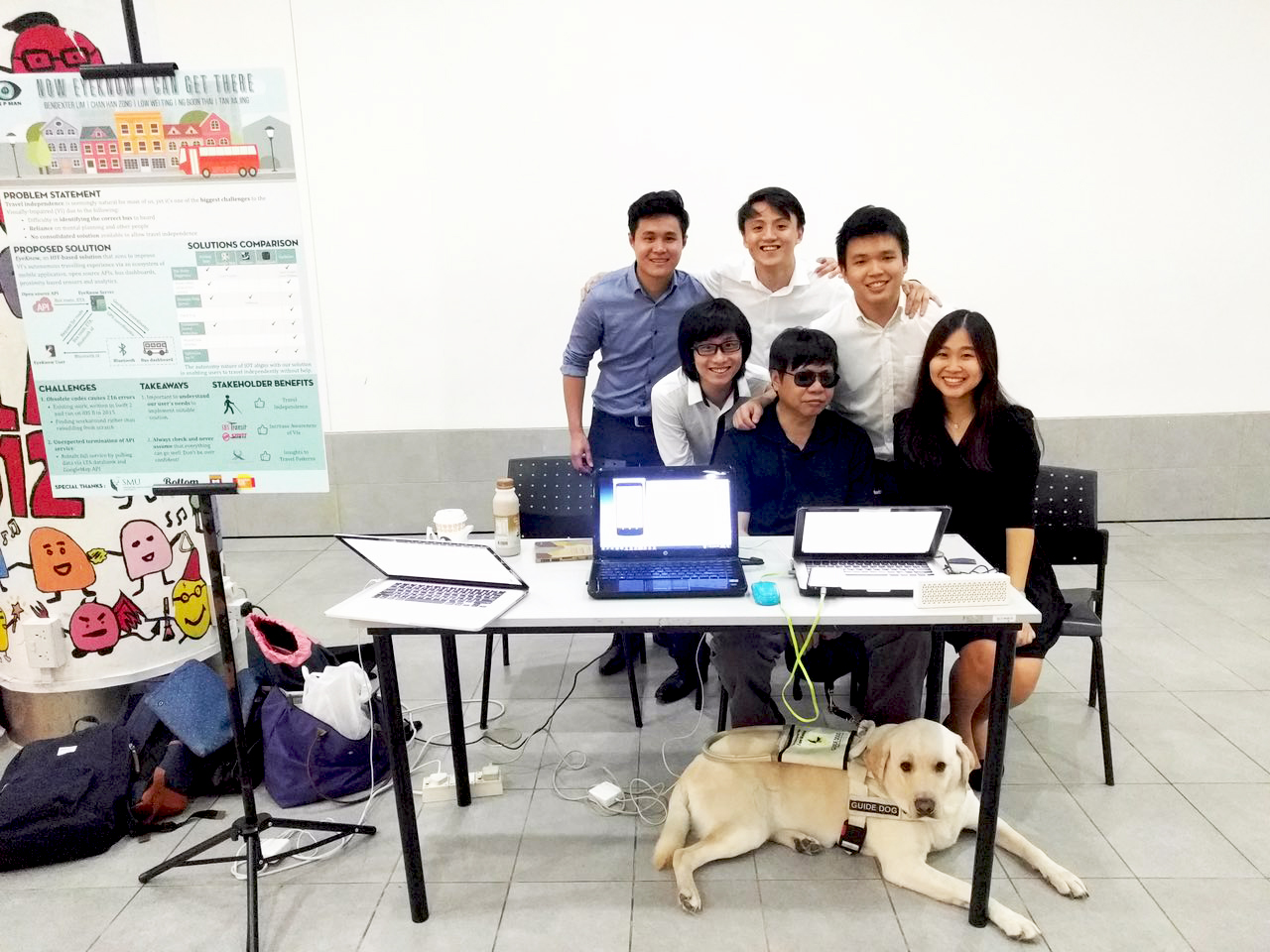 Yet another team has developed the iFindYou app, which uses Bluetooth Low Energy (BLE) beacons and crowd-sourcing to speed the search for people with dementia who have been reported missing. The team behind it—SIS undergraduates Chia Chong Cher, Tan Wei Liang, Lucas Leong, Abdul Shafiq bin Mohd Yussaini and Yu Xiao Xiang—say their inspiration came from their shared experience of volunteering with elderly dementia patients. 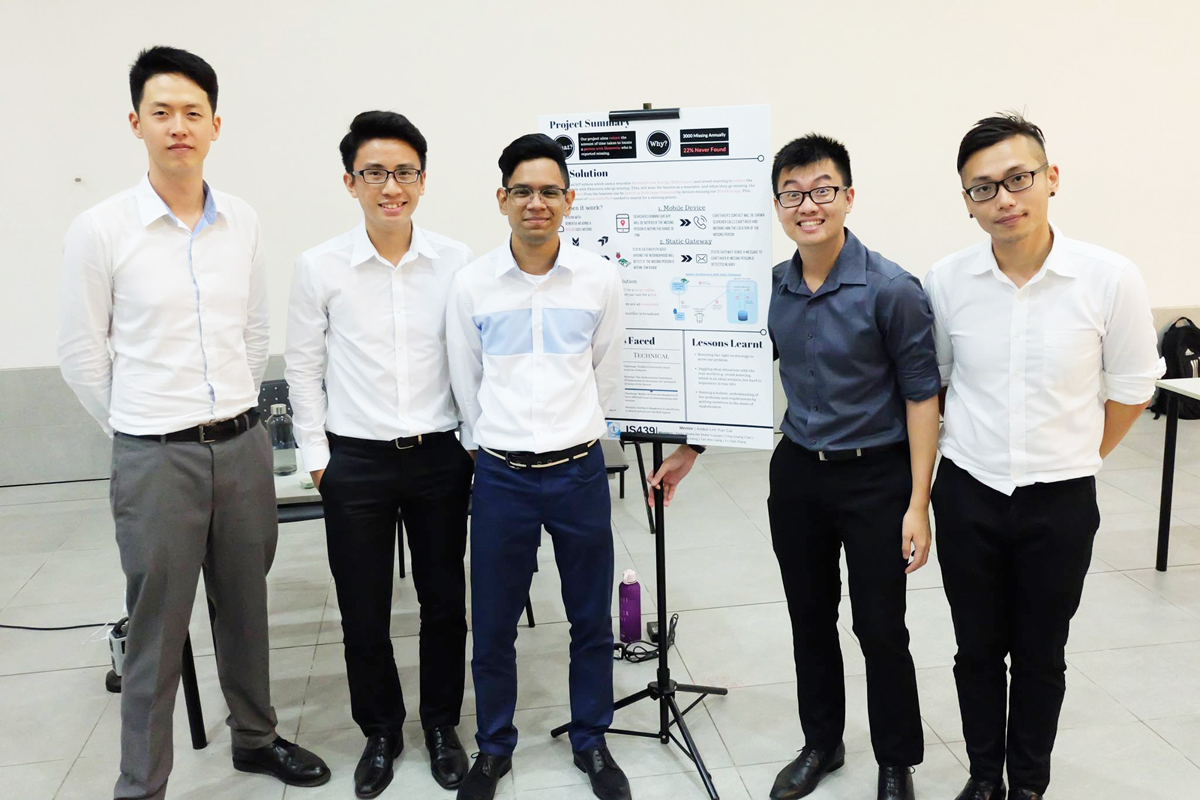 “What truly motivates us is that we can all connect and empathise with the feeling when a family member goes missing. We found that people were already using social media and traditional means of printing flyers and posters as a means to inform others of the situation… we wanted to build a solution that can be functional on its own or as a complement to existing solutions which is then able to hasten up the search process,” explains Abdul Shafiq.

It took the team ten weeks to develop a prototype, which is currently being tested. Their key challenge has been to secure the accuracy of a GPS system without compromising user privacy. “GPS systems track the exact locations of their users at all times which is a privacy concern to some,” explains Chong Cher, “our BLE system avoids this issue as it only tracks the proximity of a user to another user or static gateway.” 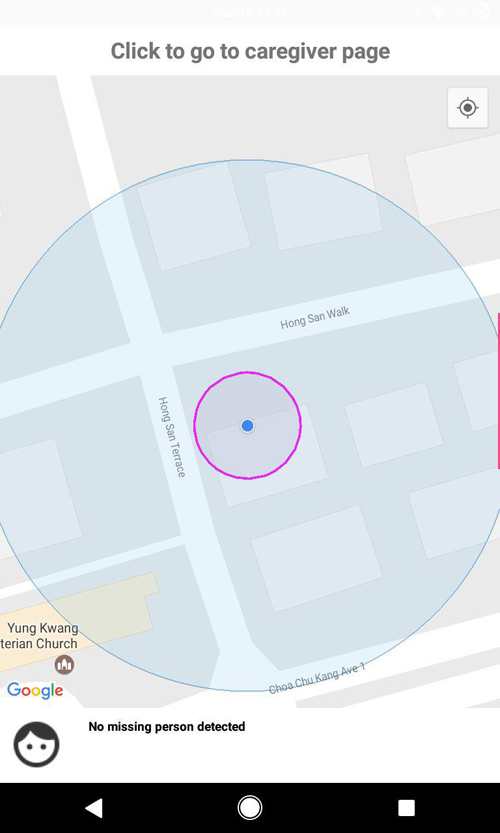 Screenshot of the iFindYou app

So there’s less risk of privacy infringement, but this means the system lacks the same pinpoint accuracy as GPS, and it’s unable to give the exact coordinates of the missing user. As you would expect, the team has met this challenge head-on with an innovative solution, “through the use of triangulation, where we are able to combine the proximity of readings of multiple users to narrow down the probable area the missing user is in. Right now our implementation is rather basic but we’re confident that with more testing and tweaking we’ll be able to improve the accuracy of our solution to be comparable with GPS.”

Both the TrAVEl and iFindYou teams agree that academic institutions have an important role to play in bringing like-minded students together to solve real-life challenges.

Yu Xiao Xiang of the iFindYou team says, “SMU allowed us to gain exposure to the technologies used in our application, and opportunities to interact with leaders of different industries. It also provided great exposure, such as community service projects for us to interact with the public to address their concerns. This gave us great motivation to innovate further and improve on solutions that already exist.”

Boon Thai from TrAVEl says the teaching approach at SMU, which encourages curiosity and doesn’t frown on failure, has helped to nurture his passion for innovation, “I’m fortunate that SMU’s teaching style is for students to actively think, question and debate in class. It doesn’t matter too much if you’re wrong, as you can learn from it.”

It seems 2017 holds significant promise for both teams. The iFindU team is busy preparing a business plan to attract the investment necessary to launch the technology island-wide.

And, unsurprisingly as a millennial social innovator, Boon Thai says in future he wants to focus more on finding life-changing solutions to human problems, “I want to be less of a tech person and more of a solution design person. It’s not that easy for someone to design a great solution. I would rather focus my time and effort in finding and designing innovative solutions to problems that users face, than to be developing applications.”

2017 Undergraduate Applications are now open till 26 Mar 2017! Find out more about our Bachelor of Sciences (Information Systems) programme today: http://bit.ly/2fNvQkI

SMU Law: The Hitchhiker’s Guide to the SMU Law Galaxy
Where Do SMU PhD Students Live?