Following a brief moment in time when Singapore seemed to have the coronavirus outbreak under control, a surge of Covid-19 cases in the migrant worker community here swiftly changed the situation. As of 14 July, 43,942 of Singapore’s 46,629 Covid-19 cases were migrant workers living in dormitories—which amount to 94 per cent of total infections.

This has sparked unprecedented public scrutiny over these workers’ living conditions. But that could also be the silver lining to this crisis, says Christy Davis, Executive Director of the Lien Centre for Social Innovation at Singapore Management University. 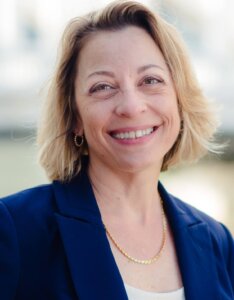 “Migrant worker advocates and non-governmental organisations have been pointing to the problems confronting vulnerable workers for years,” she points out. Indeed, the Lien Centre itself published a report in 2015 that identified some longstanding drivers of psychological distress for migrant workers here.

“But it took a pandemic for Singaporeans to sit up and pay attention. And the Covid-19 outbreak at worker dormitories is not a wasted crisis,” Davis believes. “It has led to soul-searching on our treatment of migrant workers as a nation, and we are seeing more momentum for positive and collective action across all public, private and social sectors than ever before.”

How can this momentum be sustained? These are some key areas that could benefit from continued attention from the public and policy-makers alike as we move forward:

Learning from the current outbreak, the Singapore government has announced plans detailing how the design of future worker dormitories will reduce the risk of similar outbreaks. Each worker will have more space to himself, and toilet facilities will be shared among fewer people, for instance.

Davis lauds these efforts, noting: “Don’t forget these plans were worked out and announced while the government was in the thick of battling the Covid-19 outbreak. It’s impressive leadership.”

But even after the pandemic is under control, there are workers who will continue to face vulnerabilities with regards to housing if other things don’t change. For instance, the Lien Centre’s 2015 report stated that South Asian migrant workers who were injured and/or had salary disputes with their employers often found themselves homeless.

“For them, the issue isn’t living standards but the far more pressing one of having a stable roof over their heads while they seek redress for their injury and salary claims,” says Davis. “Currently, organisations such as the Migrant Workers Centre, Humanitarian Organization for Migration Economics (H.O.M.E.), and Transient Workers Count Too (TWC2) run shelters or provide financial aid (“rent money”) to these homeless workers in distress. We salute their work.” One possibility for redressing this power imbalance: delinking workers’ visas from their employment contracts, and allowing workers to change employers.

Changing Work Permit conditions for foreign workers would require careful consideration on many complicated issues, Davis acknowledges. For example, how will these workers sustain themselves while in between jobs in Singapore? Nevertheless, it is important to raise these difficult questions and explore potential answers, she says. “There is room for policy innovation and we hope to see more research and collaboration.”

Migration agents often charge exploitative fees when arranging for foreign workers to come to Singapore, and such agents operating outside of Singapore are beyond the reach of the country’s current laws.

New Zealand’s Immigration Advisers’ Licensing Act, in comparison, has regulations that apply to both onshore and offshore migration agents, and all fees charged by migration agents regardless of where they are located. Davis asks: “Whether Singapore can operate like New Zealand is debatable, but the more important question is: does Singapore have the political will to significantly change our immigration laws?”

“Whether Singapore can operate like New Zealand is debatable, but the more important question is: does Singapore have the political will to significantly change our immigration laws?”

Social enterprise founder Cai Yinzhou, an alumnus of SMU’s Master of Tri-Sector Collaboration programme at the School of Social Sciences, got to know migrant workers living in Geylang in 2013. Realising that there were many misconceptions about his neighbourhood, he started offering walking tours and events under his business, Citizen Adventures.

His friendships with these workers eventually led him to start #Backalleybarbers in 2014. “I found out that one of the workers had been saving up his wages to send home, and couldn’t afford to get a haircut. So I looked up YouTube videos to teach myself how to cut hair, and offered to cut his hair for him,” says Cai. “It was a simple gesture, but helping to meet this basic need also enabled me to connect better with this friend.”(Read also: Breaking Down Barriers With Cai Yinzhou) 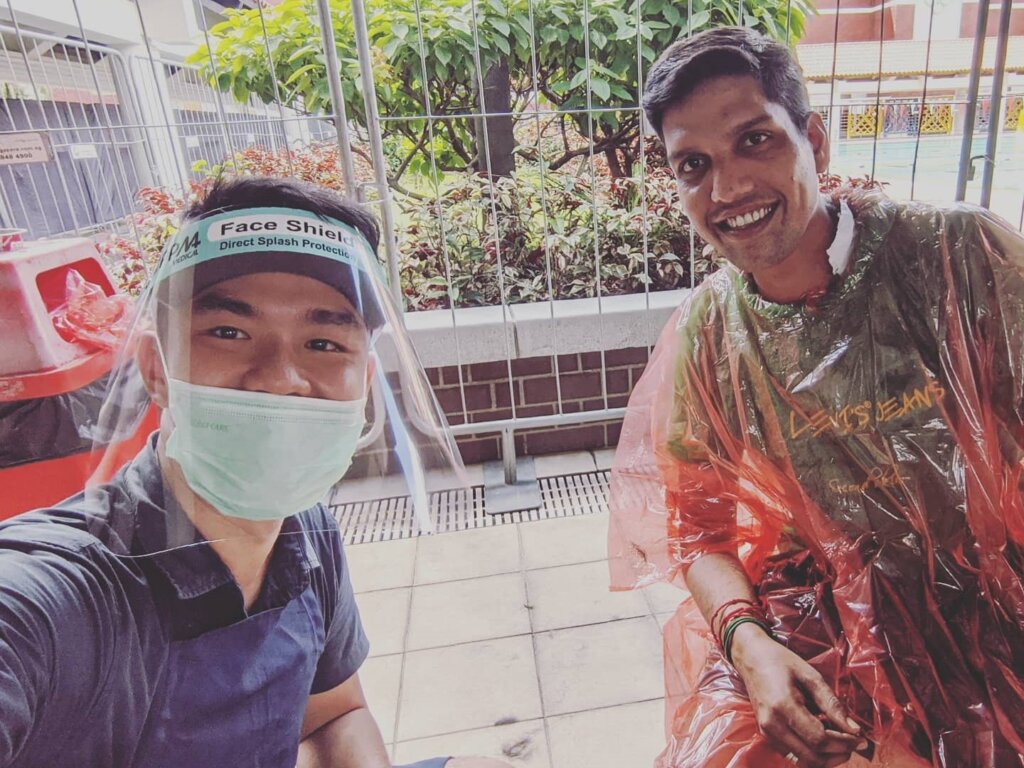 Yinzhou with one of his migrant worker friends at a free haircut session.

Today, #Backalleybarbers can count on its pool of volunteers for its free haircutting sessions, which sometimes take place in migrant worker shelters and nursing homes. In April this year, Citizen Adventures also became the founding member of the Covid-19 Migrant Support Coalition (CMSC), along with the groups Migrant x Me and Singapore Migrant Friends.

CMSC volunteers have banded together to distribute almost 1.3 million essential items such as toiletries and food to migrant workers since the start of the circuit breaker. The initiative also includes coming up with educational and wellness-themed content in the workers’ native languages to engage them and lift their spirits amidst this difficult time of being confined to their dormitories. 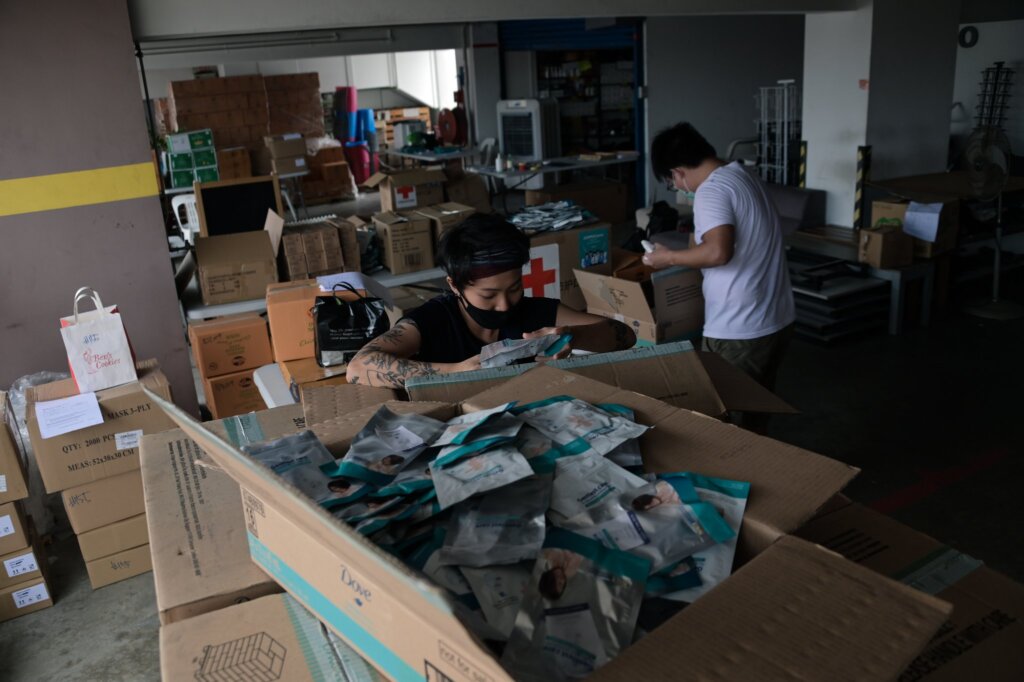 CMSC volunteers working to get essential items to migrant workers during the pandemic.

For Cai, a key role of his initiatives is to build meaningful friendships between Singaporeans and foreign workers. “We often do not realise that there is such a huge population of low-wage migrant workers in our midst that fill up a third of our workforce, doing the jobs most Singaporeans do not want to do. Many Singaporeans may not have the chance to interact with foreign workers and tend to see them as different and separate from us in Singapore. But as Covid-19 has revealed, we are all interconnected; and in recognising this interconnectivity, caring for one another will truly enhance our social compact and resilience” he believes.

Or, as Davis puts it: “The time is now for a new social consciousness about our nation and all of us living here and contributing in our own ways. Singapore is a country built on adversity. In the midst of grief and heartache, there is hope for the future, learning from hard lessons to bring about the systemic changes needed for a vibrant, just society.”

What We Learnt Putting Together SMU’s Very First Virtual Freshmen Orientation From Scratch
Taking Learning to the Next Level: Pairing SMEs and Students for Mutual Benefits