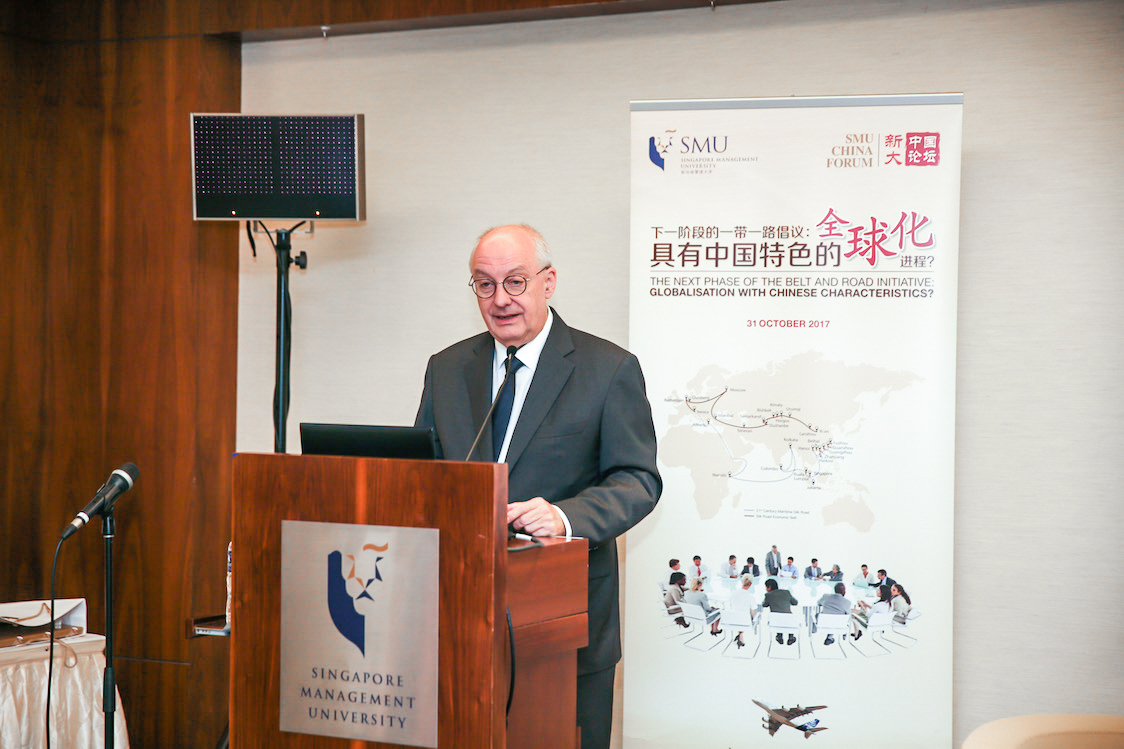 There are some who fear that China’s Belt and Road Initiative (BRI) may actually prove detrimental to Singapore. China’s revival of the ancient Silk Route would connect Asia, Europe and Africa, passing through more than 65 countries with a population of 4.4 billion and a third of the global economy.

With Singapore’s importance hinging on its strategic location at the Straits of Malacca, the alternative trade routes developed in China’s BRI including Malaysia’s East Railway Line or the Kuantan Port, have made some people fearful that the island’s strength as a sea hub will diminish, says Dr Santitarn Sathirathai, head of Emerging Asia economics at Credit Suisse AG at the SMU China Forum 2017 on the Next Phase of the Belt and Road Initiative. But Dr Santitarn urges naysayers to think more broadly. 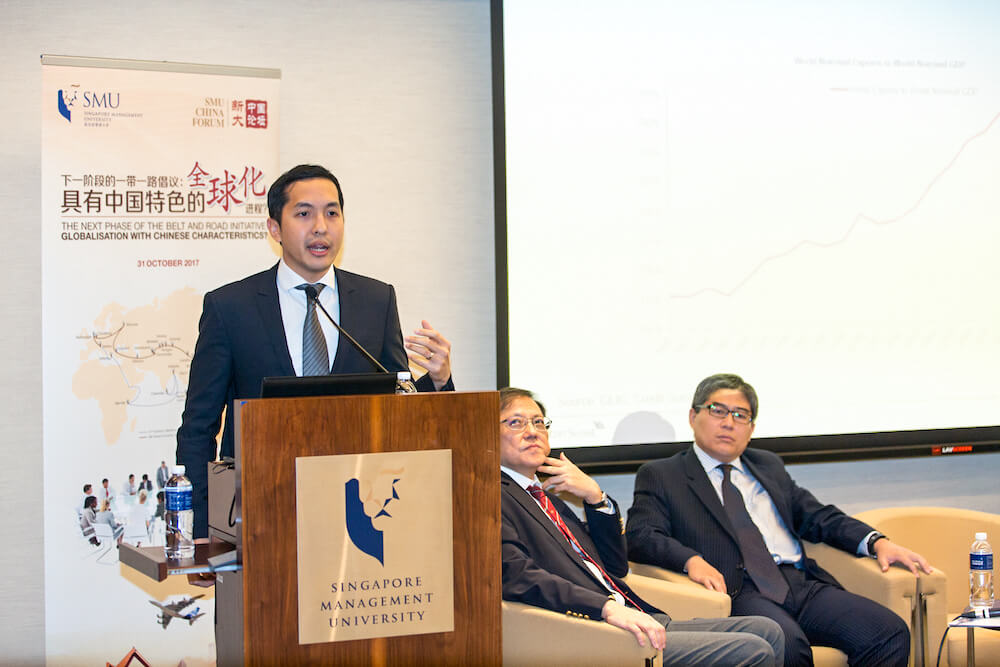 “In this world where globalisation led by the western world is in retreat, the BRI becomes very important,” he says. “BRI can help ASEAN not only through infrastructure building but by helping to boost growth.”

It is well known that there is a huge need for infrastructure spending in ASEAN. The Asian Development Bank estimates that ASEAN will need $2.8 trillion to $2.3 trillion of infrastructure investment from 2016 to 2030. This is a whopping annual sum of $184 billion to $210 billion a year.

Singapore’s net exports to other members of the ASEAN 6 including Indonesia, Thailand, the Philippines, Malaysia and Vietnam, surpass the country’s exports to the US and China individually, says Dr Santitarn.

Hence with such strong economic ties “there is no doubt that Singapore can also be lifted by [ASEAN’s] growth,” he adds.

Singapore’s edge when it comes to BRI is its insights and knowledge into ASEAN, agrees Mr Law Chung Ming, group director of Transport and Logistics at IE Singapore, who spoke on the same panel. 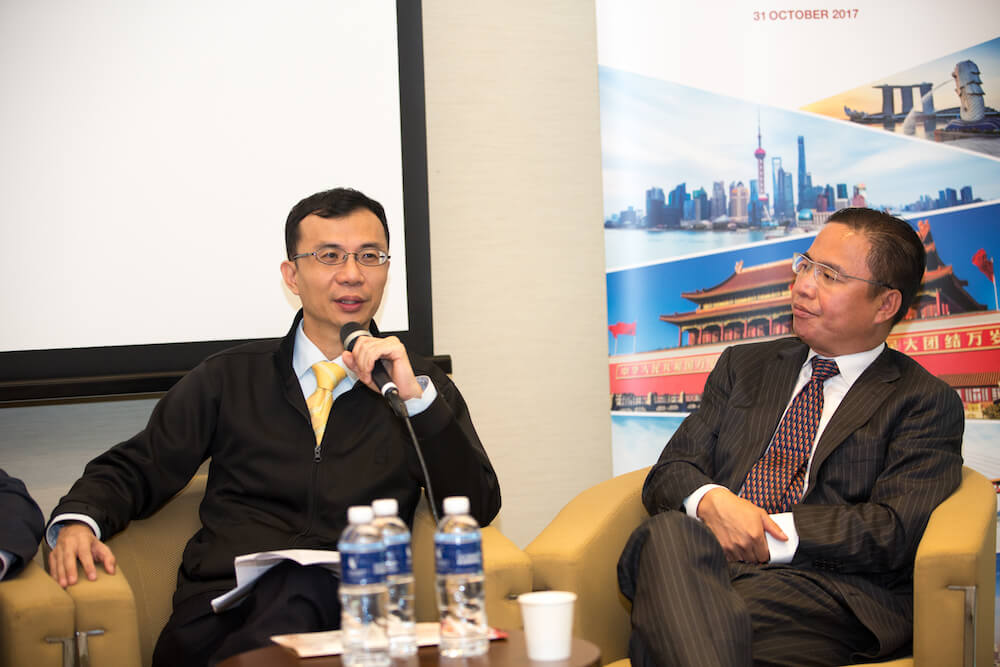 “Through our close economic, social and cultural ties with Southeast Asia, we have gained very deep knowledge about the way things are done,” says Mr Law. “It’s not easy to navigate through [these countries] but that’s where Singaporean companies have an edge.”

When people think about BRI they think about hard infrastructures like roads, trains and pipelines, he adds. But for Singapore, we should really be thinking about soft connectivity where companies can provide services from financing to legal to insurance or providing supply chain solutions.

In terms of air connectivity, Singapore is in a truly enviable position. More than 40 Southeast Asian cities fly to Singapore direct, more than 30 cities in China and about 10 cities in India.

“I don’t think we have fully maximised and leveraged on our own current connectivity,” says Law.

The ASEAN region is developing at a rapid rate. Its combined gross domestic product of $2.4 trillion grew by 4.7% in 2015, and annual average projected growth from 2016 to 2020 is 5.2%, according to PWC. The bloc is currently the seventh-largest economy in the world and is projected to become the fourth largest by 2050.

Southeast Asia “provides a lot of opportunities for China and Singapore”, observes Law.

Yet, even beyond the Southeast Asian link, Singapore and China are “very close partners, especially on an economic front,” reminds Law. 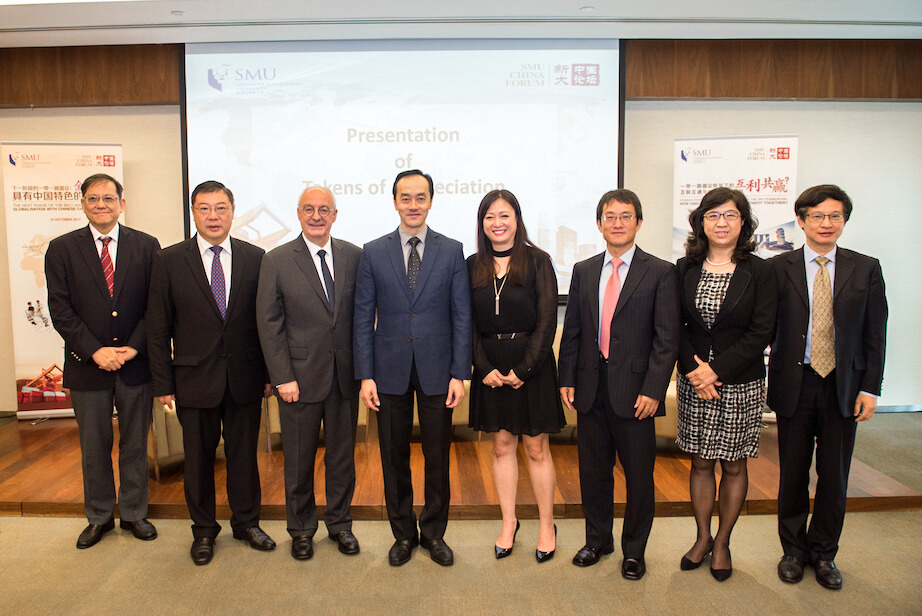 The Chongqing Connectivity Initiative is the third government-led project between Singapore and China and is expected to drive growth in China’s western region by enhancing Chongqing’s connectivity to Western China.

IE Singapore has made a significant pool of funding available for Singapore and Chinese companies involved in BRI, which can give rise to opportunities for direct joint ventures, continued Mr Shanmugam in his piece.

“Singapore companies must take advantage of this great opportunity and grow together with this initiative,” says Mr Law.

“The key is while there could be some facets where Singapore would lose or gain a smaller slice of the pie,” he says. “What is more important is whether the pie itself is expanding.”

Yet, Dr Santitarn highlights in conclusion, that the question now worth exploring, is which projects, in particular, would make the most sense for ASEAN economies to unlock the region’s potential.

Read more about the SMU China Forum 2017 on the SMU News.

Good Goods, Bad Goods—Can You Really Tell When Shopping Online?
Why Enrolling in Multidisciplinary Programmes Can Widen Your Scope of Opportunities