“Why must we do 80 hours of community service?” 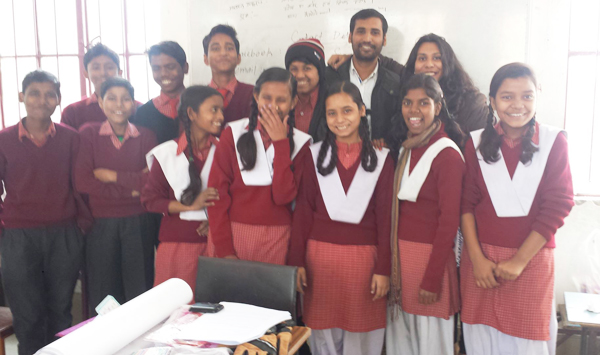 The initial scepticism of a freshman

I remember it vividly: three years ago, I sat among hundreds of other freshmen at the Ngee Ann Kongsi Auditorium for the community service briefing by SMU’s Centre for Social Responsibility (C4SR). Within minutes, I cringed at the words on the screen: “80 hours of community service is a graduation requirement.” My cynical thoughts at the time: How can community service be made compulsory? How can serving the community be imposed and quantified by the number of hours?

At the start of my freshman year, I also felt strongly that one should only be involved in local community projects to ensure that the efforts are sustainable. I was unconvinced about the value of overseas projects: to me, they felt like one-off, unsustainable initiatives that could potentially do more harm than good. This was one reason why I started my community service journey in SMU through BP Mentoring, an organisation that I’ve been involved in since my polytechnic days which aims to mentor and motivate academically weak students in primary and secondary schools.

I am now entering my final year with various community service experiences under my belt,  and my views have evolved considerably. My experiences have shown me that the mandatory community service requirement pushes each of us to think beyond ourselves, and educates us to be mindful about the society we live in. It may have been the formal 80-hour policy that gave many of us the initial first-hand experience in serving the community, but it was C4SR’s flexibility and support in student-led initiatives that has reshaped my own understanding of community service and also enabled my own journey of giving back.

The turning point of a global citizen

My original hesitation towards overseas projects wavered when I chanced upon the recruitment drive for Project Luminaire 2, an overseas community service project (OCSP) with the mission to light up Filipino households through the innovative and simple technology of solar-powered light made from recycled bottles. Since the project was in its second phase, and focused on sustainability, I decided to go for it. This was a decision that added new dimensions to my understanding of service and which first got me involved in serving the international community. 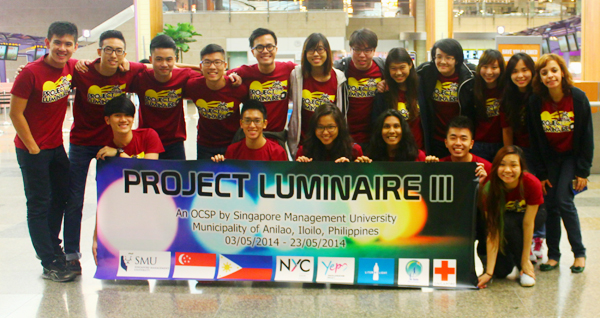 After her first Project Luminaire stint, Manorama stepped up to lead the project in the following year.

Through my stint with Project Luminaire, I realised that the value of service is not dictated by geographical boundaries, i.e. whether it is done locally or abroad. The sustainability of service also means sincerely thinking about the real needs of others, and helping with the understanding that everybody is potentially in need of help (even us, in our largely privileged lives in Singapore). With this frame of mind, I began connecting with my identity as a global citizen who has received all kinds of help and support from this world, and who has the responsibility to give back in any way I can.

Along with my work with Singaporean youth-at-risk, I decided to step up and lead the next instalment of Project Luminaire. I learnt so much from the trip: from organisational skills to the nuances of intercultural communication. But beyond these skills, my biggest takeaway from the trip was the overwhelmingly warm feeling that I experienced as I handed over the bottle of light to Nai-nai (grandmother in Tagalog). She showered me with kisses and told me how she no longer fears falling down at night – a very real fear for the elderly, exacerbated by the fact that she lived alone in a house up on a hill with no electrification.

I realised then that there was so much more work to be done. With many more individuals like Nai-nai all around the world who struggle with basic necessities, I felt strongly that I could succeed in making a difference. This was the prevailing sentiment that propelled me towards yet another overseas project, to a country that I’m very familiar with and yet never knew how I could help: India. 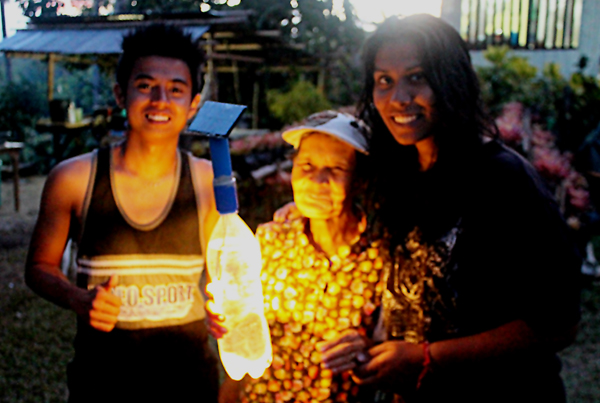 After greatly improving Nai-nai’s quality of life with a “bottle of light”, Manorama felt the drive to continue serving the needs of the less-privileged in countries other than Singapore.

The determination to do more

In December 2014, I went on a solo trip where I worked with Little Stars School, which is dedicated to educating children who live in the slums of Nagwa, Varanasi, India. During the 22-day recce trip, which I named Project Roshni (which means a ray of light in Hindi), I spent time speaking with the locals to gain a deeper understanding into their lives. After a detailed assessment, I was better able to define their most important unmet needs: electricity, medical and social support.

The lack of electricity is one of the main hurdles in the development of rural India. In recent years, it has made life really difficult in the extremely hot summer period. In May 2015 itself, there have already been more than 2,000 reported deaths around India due to the heat wave. In Little Stars School, which provides free education to around 600 children living in the slums of Nagwa, students have to endure harsh temperatures during the summer months where temperatures rise up to 45 degrees. Although the school has received fans, lights and computers in donations, they cannot be utilised due to the lack of electricity. Contrast this with our comfortable air-conditioned seminar rooms here at SMU!

On her first trip to Little Stars School, Manorama spent time with the students and their families to better understand their needs.

After my trip, I felt very strongly that these poor conditions had to change. Although I’ll be graduating from SMU at the end of 2015, I decided that my journey of service was far from over. Hence, I’ll return to India this December to (1) install solar panels which will provide electricity to the students of Little Stars, and (2) construct two rooms in the school where volunteer doctors and social workers will carry out medical and social care for the community.

How you can help

A total of SGD15,500 will be required to bring Project Roshni to fruition. Since I will no longer be an SMU student at the time of this project, this project will not be eligible for the various grants offered to project teams in SMU for OCSPs.  I hope to instead raise the necessary funding from individuals and corporations who believe in this project. To this end, I’ve launched an online crowdfunding campaign at Indiegogo. At the time of writing, 15% of the project has been funded, with 85% more to go: please visit my Indiegogo campaign to contribute and to find out more!

Some say that serving the community is a personal calling that is not meant for every individual. I believe that the 80 hours of community service challenges us to rethink this, and to recognise that each of us has a duty to help our fellow man. Each of us is where we are with the help of others, and I believe that our world can be made stronger, kinder and more loving if we all chose to help one another.

If you feel the same way as I do, you just have to start acting on that feeling. The best way to start? With those 80 hours.

Project Roshni is set up with the mission to light up the lives of students from the Little Stars School in Varanasi, India. The project aims to provide electricity in the school through the installation of solar panels and construct two rooms for volunteer doctors and social workers to provide medical and social support for the students.

Gunning for a career in consulting
Reflections on my entrepreneurial journey