Protecting Predators of the Sea with SMU LKCSP Scholars 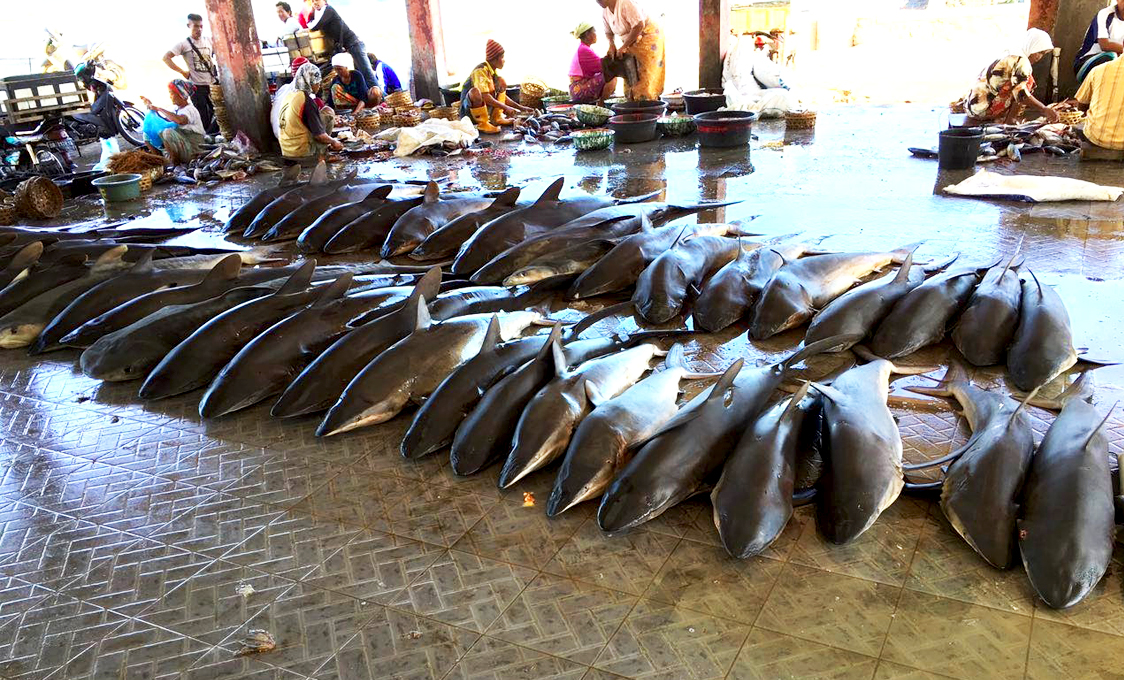 During the summer of 2016, we embarked on an overseas community service project (OCSP) to Lombok, under The Dorsal Effect. Before the start of the trip, we met with Kathy Xu, founder of The Dorsal Effect—a local social enterprise with the mission of ending shark fishing through providing alternative livelihood for the shark fishermen in Lombok. She shared with us a defining moment in her life when found herself swimming alongside a whale shark during one of her many diving trips. This intense moment sparked her fight to protect creatures of the sea and kickstarted her social entrepreneurship journey.

This trip, albeit short, was an eye-opening one. We were exposed to gruesome scenes of the lucrative shark fin industry, the complexity of the problem, and an individual’s strive towards conservation. Throughout the week, we visited various locations in Lombok to better understand the shark fin supply chain. We also experienced firsthand The Dorsal Effect’s positive impact through providing fishermen with an alternative livelihood. Let us take you on a week’s journey of cognizance and reflection. 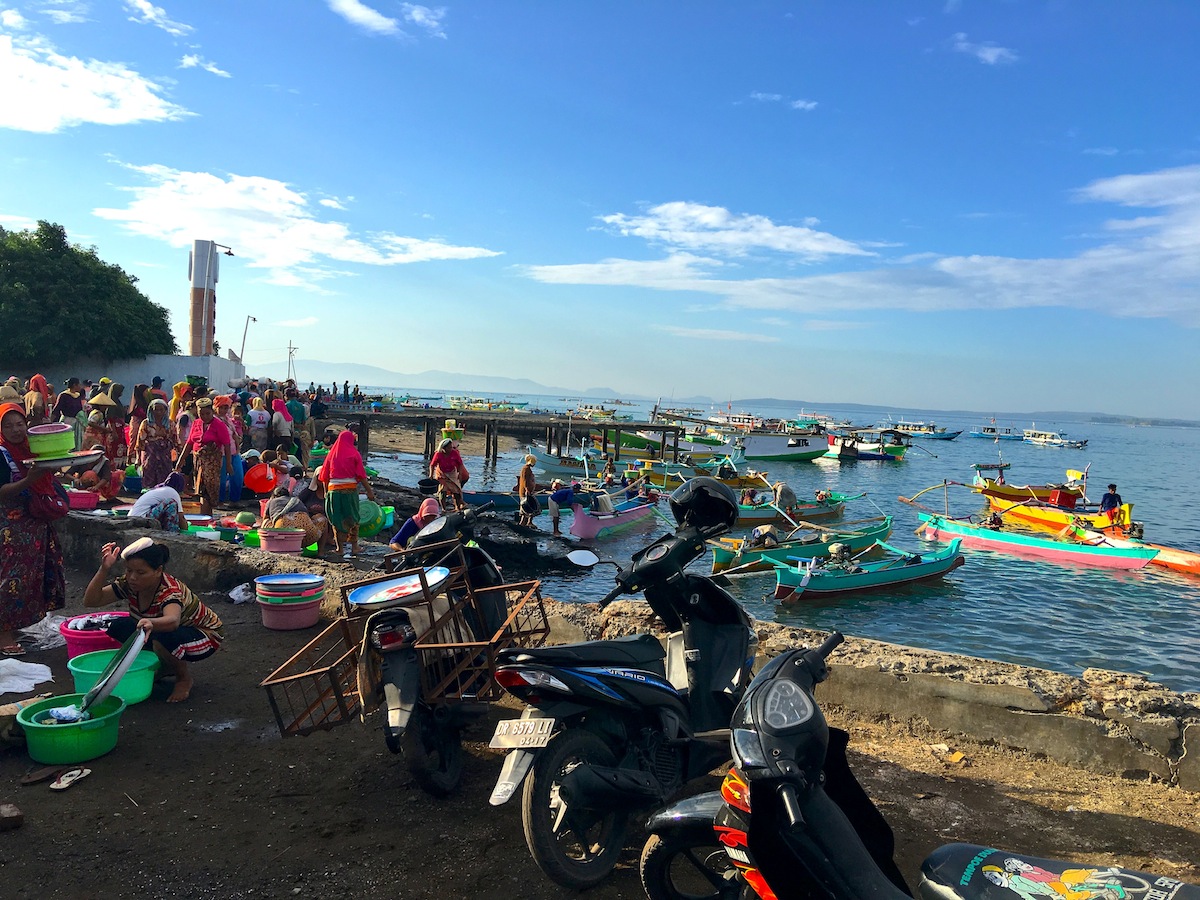 Sights and sounds from Tanjung Luar

Misunderstood creatures of the sea

We started our second day in Lombok bright and early in the morning with a visit to Tanjung Luar, a local fish market where sharks are auctioned daily by fishermen. After a grueling 4 hours’ drive from our accommodation to Tanjung Luar and arriving slightly later than expected, we were met with the news that the shark auction was cancelled. While it was disappointing that we weren’t able to witness the shark trade for ourselves, on a brighter note, it also meant that fewer sharks were being poached that day, which was definitely encouraging.

After one hour, to our surprise, we were informed that a group of shark fishermen were arriving at Tanjung Luar. Initially excited, we gathered by the shore to watch the boat make its way towards the island. This excitement, however, soon took a dark turn, throwing us into a state of sadness and heartache as we witnessed more than 40 sharks—mostly still alive and semi-conscious—being hauled off the boat. Seeing how helpless these sharks were made us question the fierce and frightening image the media portray of these predators. The fear that we have of these sea creatures now seems sorely exaggerated; as even statistics show that fatal shark attacks are rare with only one occurring in every 2 years. The overly dramatised media portrayal of sharks has made them one of the most misunderstood species in the world. 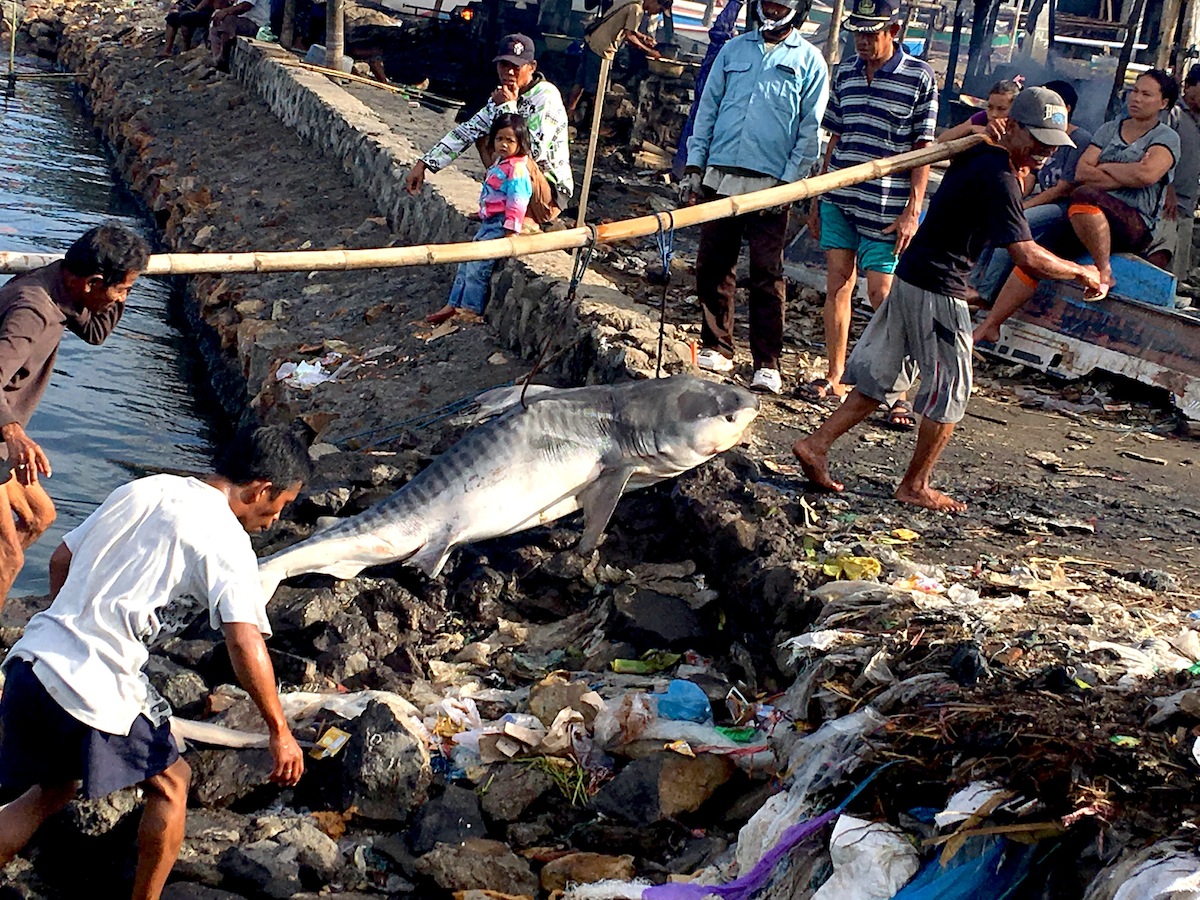 What we witnessed at Tanjong Luar was both grotesque and heartbreaking. Some of these sharks were barely alive and yet fighting for survival. To stop the sharks from thrashing around the fishermen had to step on their heads to pin them down. They then hooked the carcasses onto bamboo poles and carried them to the auction floor.

While the plight of the dying sharks saddened us, we knew that the fishermen had little choice, as they themselves are victims of circumstance. Their job is a dangerous one. We learnt from Najamuddin, a staff from wildlife conservation society (WSC), that with overfishing in Lombok’s waters, the fishermen were forced to travel further and further into foreign waters to capture sharks, as the shark population in Lombok’s waters had dwindled significantly over the years.

They are often at sea for over two weeks at a time, hoping for a prize catch as each fin is worth up to US$80 in sales. However, as a majority of the profits go to the hotel at the end of the supply chain, and with traders as the middlemen, the fishermen are left with a lot less after splitting the profit amongst the boat crew. Juvenile sharks, on the other hand, are only worth the equivalent of S$10. And if they had unintentionally caught the wrong species, such as a ‘less valuable’ manta ray, it would have to be hacked and discarded—so much effort only for a precious life to be wasted.

Lombok’s high reliance on the fishing industry also means that the next generation would naturally follow their parents’ footsteps to become shark fishermen; except that by then the shark population would have dwindled beyond recourse. During the auction, Kathy also pointed out that some of these sharks are rare species and are close to being endangered. Sadly, shark conservation efforts have not seen much result. Furthermore, poor regulations also make any enforcement challenging and ineffective.

A shining beam cutting through the deep dark waters 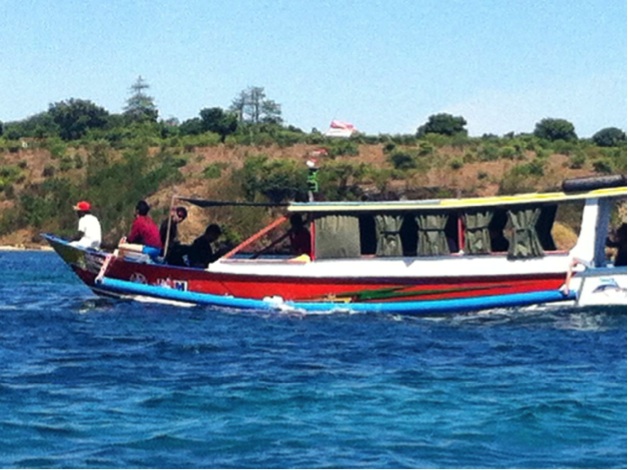 We left Tanjong Luar with heavy hearts, having personally witnessed the seriousness of the entire shark industry and the potential extinction of the shark species if nothing is done. With that, we went on to our next location, a visit to the Wildlife Conservation Society (WCS) office to find out more on the conservation efforts being carried out by the local community. Through the interaction with the staff, we discovered that Singapore is actually one of the main importers of shark fins from Tanjong Luar. Also, the shark fin industry is much more complex and established than we had expected, due to the long history of consumption.

As much as we wish to help, the concerns that many of us had was how little an impact we would make. Other than not supporting food vendors who serve shark fins, what else can we do? The fishermen are also victims in this equation and now their livelihoods are at stake. What can be done to help them?

With Kathy’s persistent efforts, what some of the fishermen had done was to convert their open boats into cozier passenger boats, furnished with curtains and a music player. With each boat trip, the boatmen (previously shark fishermen) could earn an equivalent of S$150. They’ve now found an alternative source of income, ferrying tourists around and showing them the beauty of Lombok’s waters instead of poaching sharks. The Dorsal Effect has provided a solution—a solution, we quickly realised, which could not only help conserve endangered marine life, but also provide opportunities for future generations to lead a life of greater stability and for us to make a significant impact. However, this could only be a viable and sustainable alternative if they had a critical mass of customers riding their boats. Only then would they be able to prevent from reverting to their previous livelihood of shark fishing. 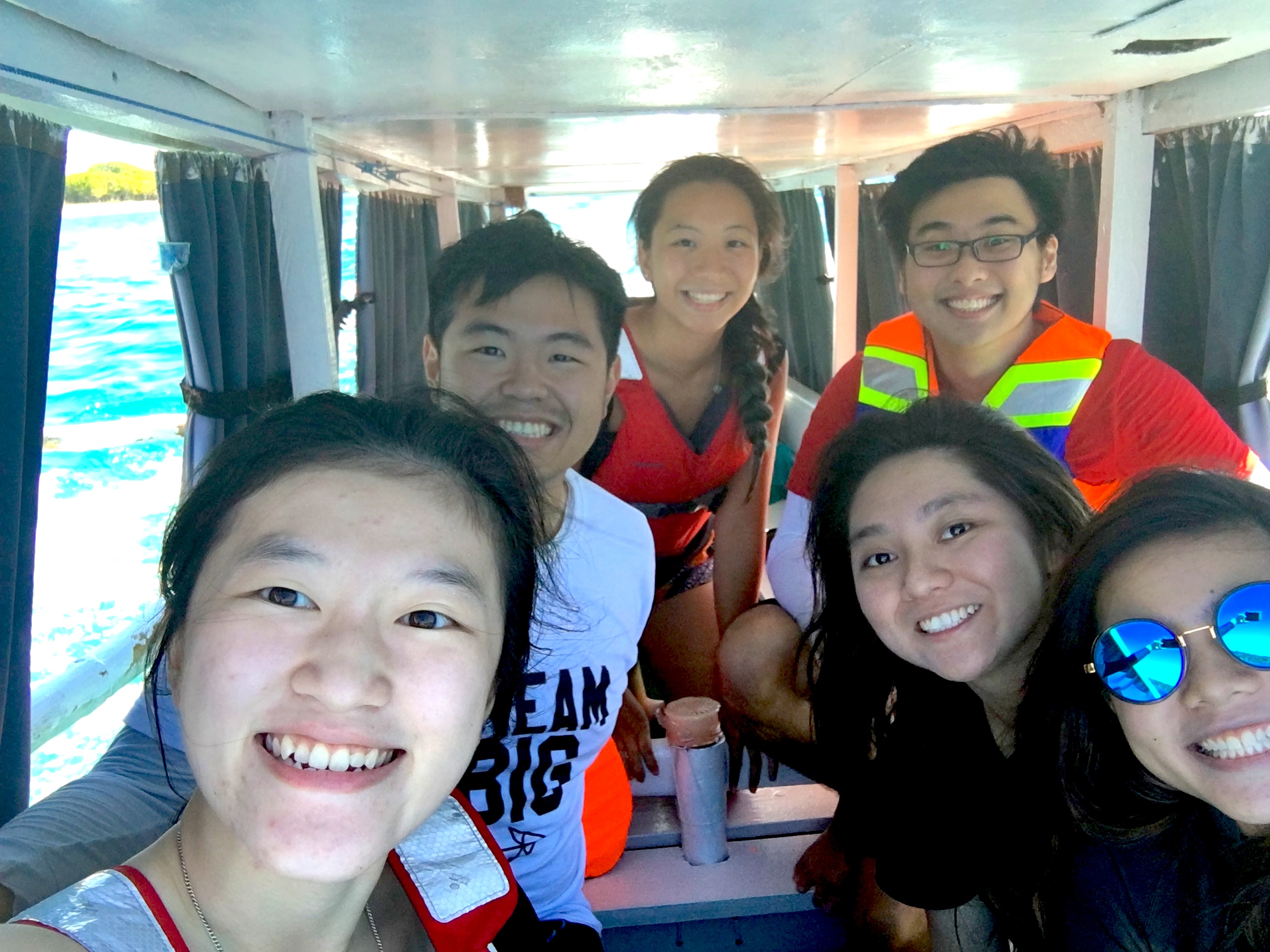 On the third day, we took one of these passenger boats out to Pink Beach and the Sunken Island for some snorkelling. The boatmen were incredibly friendly, offering us drinks after each snorkelling session. One of them was even identified and shared insights on the various types of starfish and corals as the boat moved along the clear waters. Their evident enthusiasm was proof of how much these ex-fishermen embraced the change in their lifestyles. 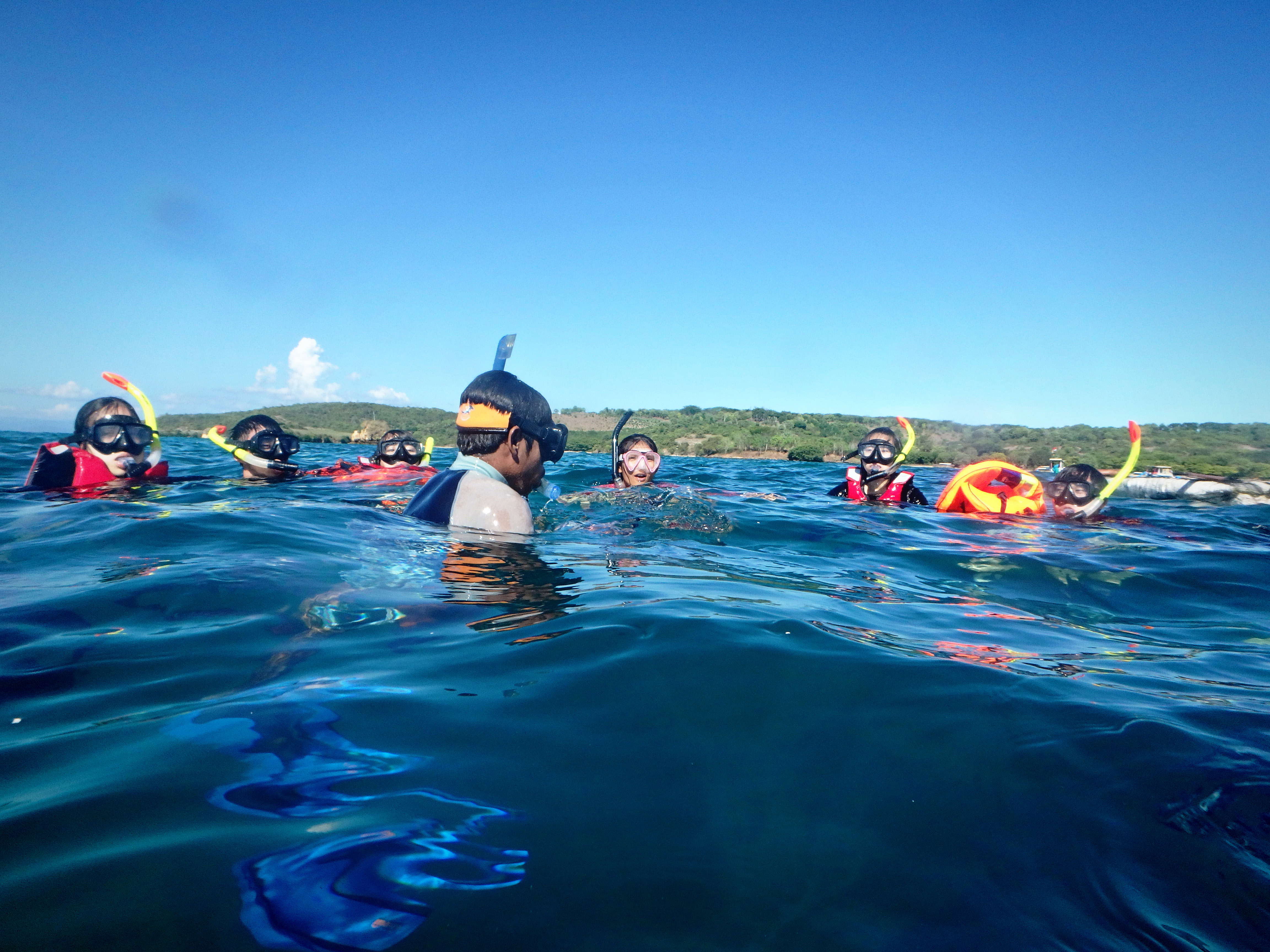 The first snorkel site we were brought to was in terrible shape. The corals were bleached and there weren’t many fishes around. Incremental changes in the water temperature have caused the sensitive corals to become easily bleached and damaged, especially with detrimental human activities such as overfishing and water pollution. On Pink Beach, we carried out a beach clean-up. It did not take long before a noticeable improvement in the condition of the beach could be observed. It made me realise how easily we can effect change to the health of the environment simply by making small adjustments to our habits and helping to clear up some of the trash that we see lying around. 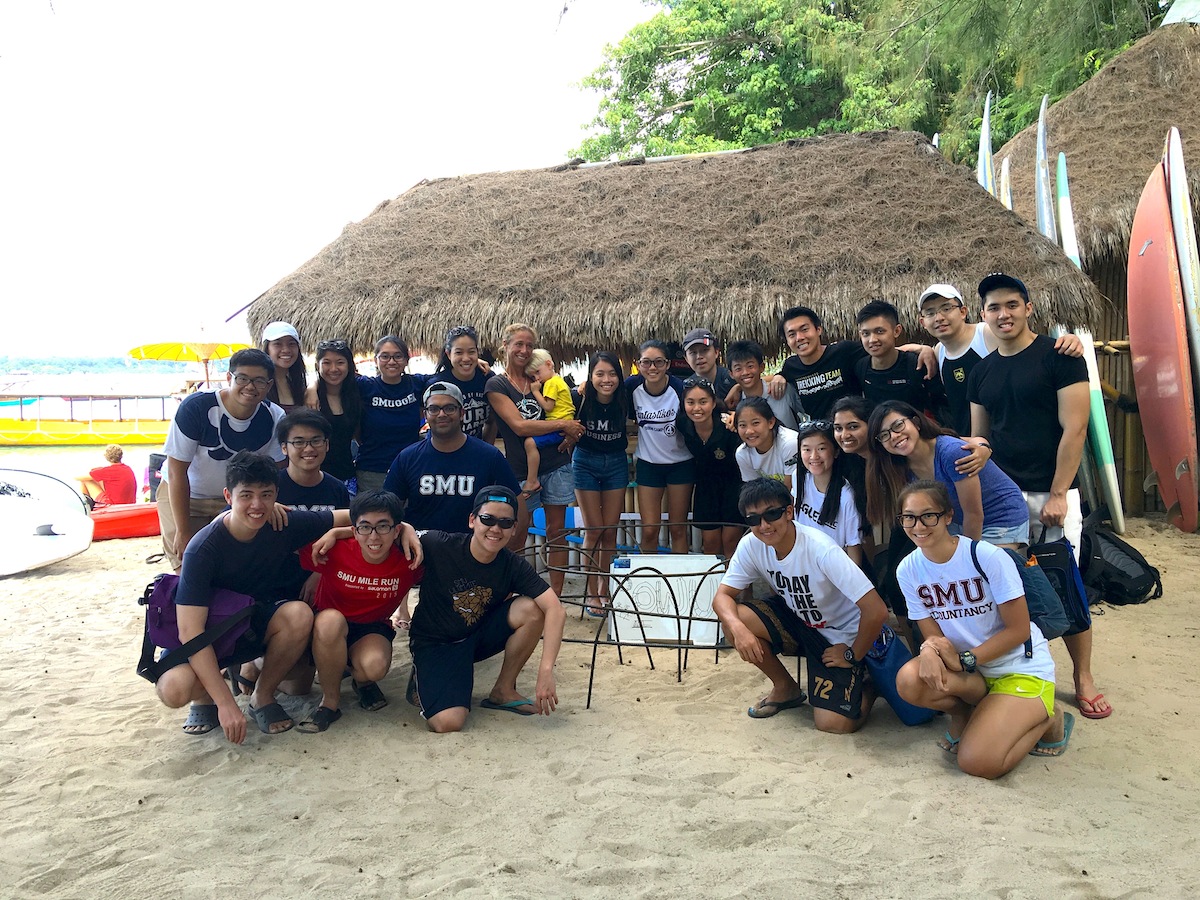 On this trip, we had the great opportunity to meet Delphine Robbe, the owner of Trawangan Dive Resort in the Gili Trawangan islands. Delphine comes from an engineering background, and with her expertise, she created her own BioRock—a metal structure placed in the ocean which allows the corals to attach and grow at a rate of 5cm per year (four times faster than the normal growth rate). The BioRock works by applying low voltage currents to the metal structure, allowing dissolved minerals in the seawater such as calcium, magnesium and bicarbonates to precipitate and form around the structure; thus forming these ‘artificial’ coral reefs. The corals grown on a BioRock are also more resilient to environmental disasters and they are extremely effective in the restoration of coral reefs.

In addition, Delphine has also been working on reducing the resort’s carbon footprint, and the resort even has its own eco-friendly septic tank. They are also active in organising projects with Project AWARE and the local Gili Eco Trust. Currently, the Trawangan Dive resort has reef restoration programmes and BioRock specialty courses for any divers interested in giving back to the ocean. 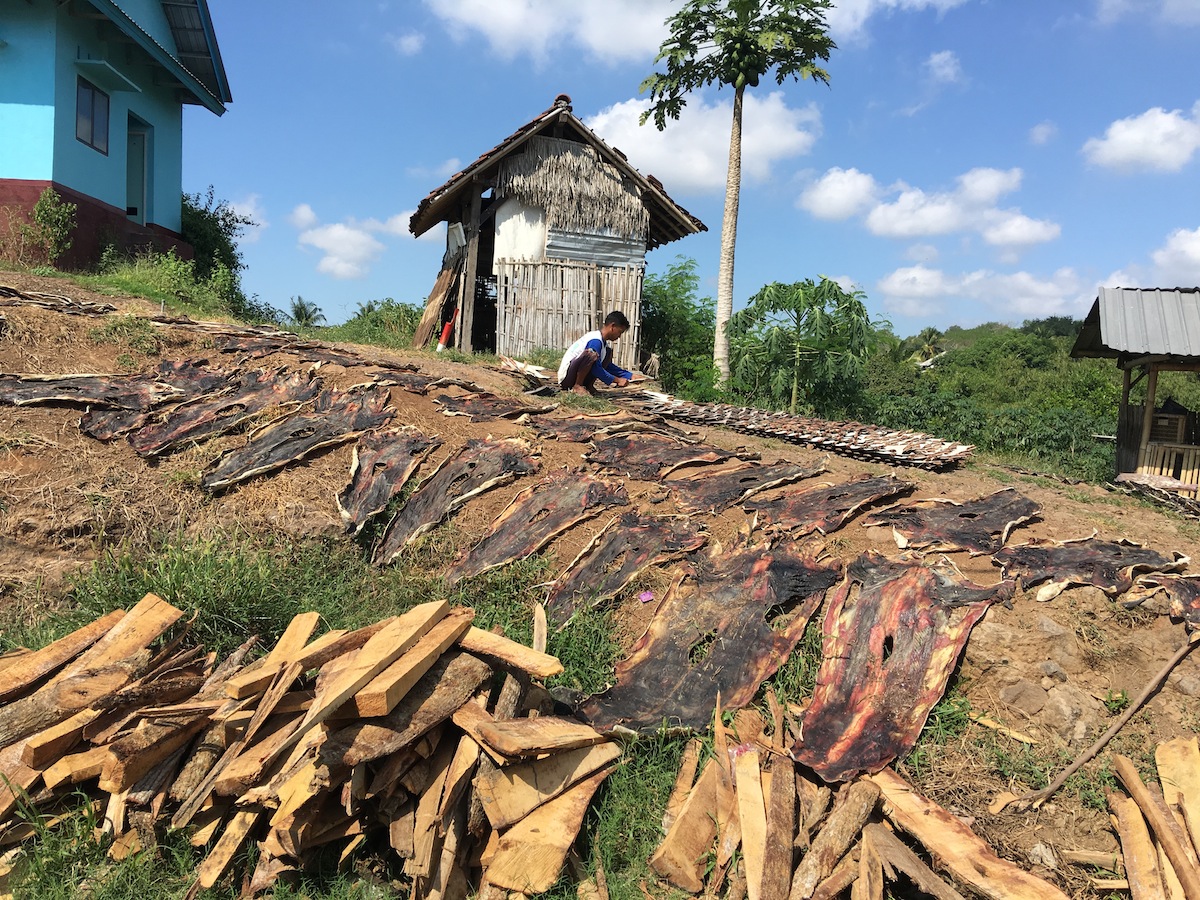 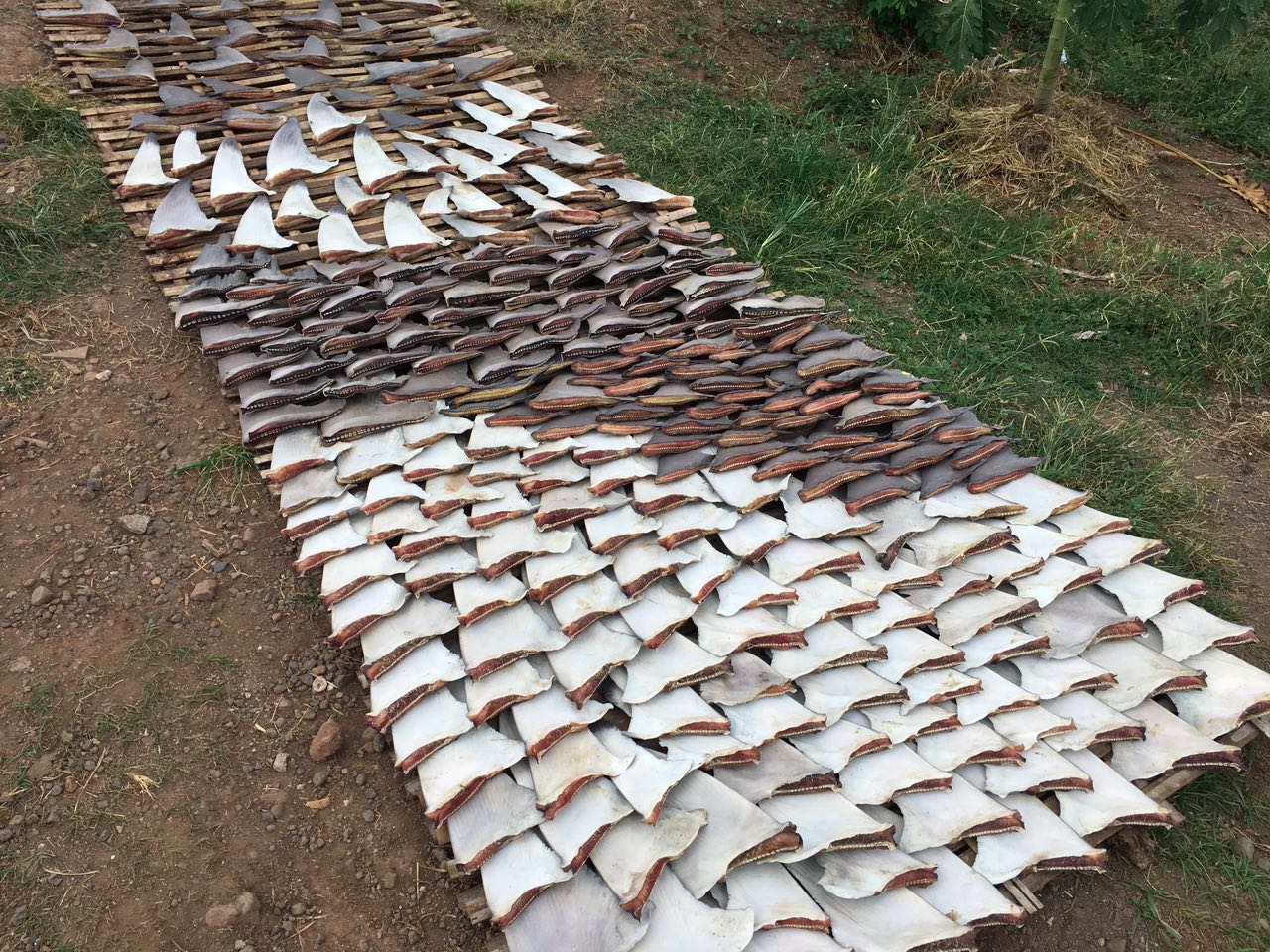 On day 7 we were back at Tanjung Luar fish market for some fieldwork with WCS. On this day, we made a visit to the Rumbuk shark processing plant. We were greeted by a pungent, appalling odour upon our arrival. It was the stench of hundreds of shark fins and shark skins drying under the sun, in plain sight.

We were literally treading a path lined with the various disembodied parts of the sharks. The fins were to be exported to all parts of the world—particularly to Hong Kong—while the skins would be made into crackers that will largely be consumed locally. As we ventured deeper into the plant, a large number of the staff were seen smoking shark meat. We were told that most of the meat is served locally as satay or exported to South America as fillets—despite the fact that shark meat contains a high concentration of mercury which is poisonous.

We weren’t quite expecting much from this short Lombok trip, but were proven very wrong. We would do the experience injustice by trying to frame the entire experience in one blog entry, but we are truly thankful to have had this opportunity. The Dorsal Effect is a wonderful organisation that is run by an equally amazing woman, Kathy. If you ever want to snorkel in Lombok, in an environmentally conscious way, or want to lend some support to the local businesses, look no further than The Dorsal Effect. 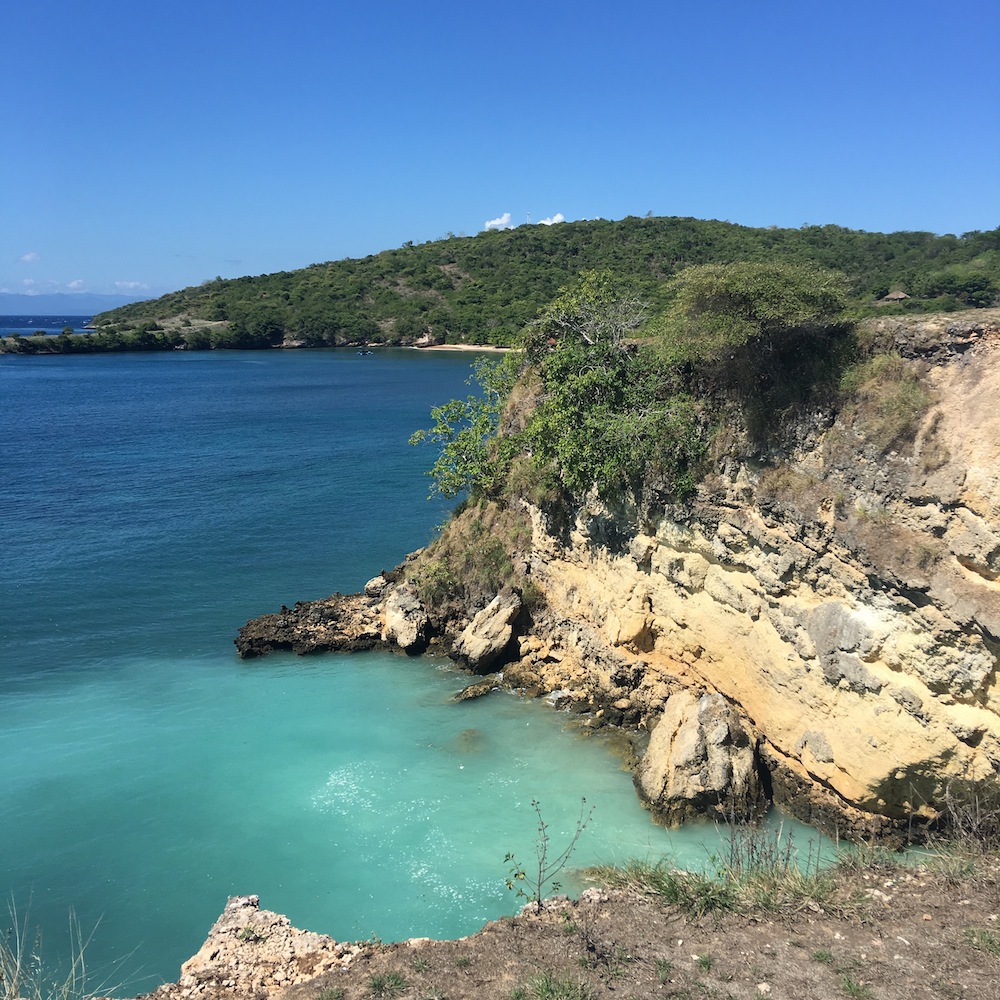 2017 Undergraduate Applications are now open till 26 Mar 2017! Find out more about our programmes and admissions guidelines at http://bit.ly/2fuzeNx

Meet the Power Couple in MBA
Why SMU: It’s All About the 360 Experience