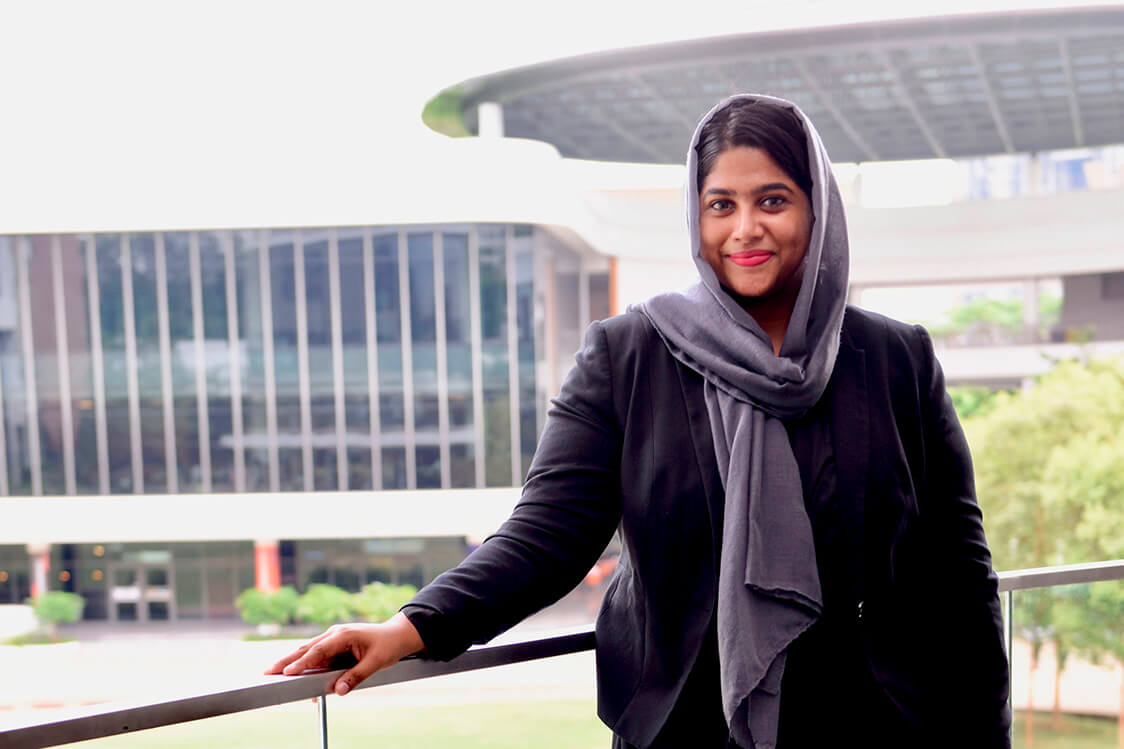 By the SMU Social Media team

Multiculturalism is a reality here in Singapore because of the diversity we have, but this reality does not come easy and is something every individual in our society has to constantly work at.

For Singapore Management University (SMU) alumna and current general manager at the Inter-Religious Organisation Singapore (IRO), Nazhath Faheema, multiculturalism and racial inclusiveness are areas that will always have room for improvement. In fact, it is the raison d’etre of her activist movement, hash.peace.

Faheema, who graduated with a Bachelor of Science (Information Systems) and a second major in law in 2010, was nominated as a Muslim youth ambassador of peace by Jamiyah Missionary in Singapore back in 2015. In order to further her pursuit of promoting a culture of peace, she founded the hash.peace movement, and has since led it to expand conversations and narratives around multiculturalism and inclusiveness.

Recognising that our hyperconnected world has also enabled the growing threat of extremism, Faheema has, more recently, set out on a mission to combat and reduce the growth of terrorist ideology in Singapore, and undertake various initiatives to raise awareness about the spread of extremism and self-radicalisation among youths.

In a recent interview with Faheema, she shared some perspectives on multiculturalism as a minority in Singapore, the challenges she faced running the hash.peace movement, and where it all goes from here.

Multiculturalism and inclusiveness in Singapore 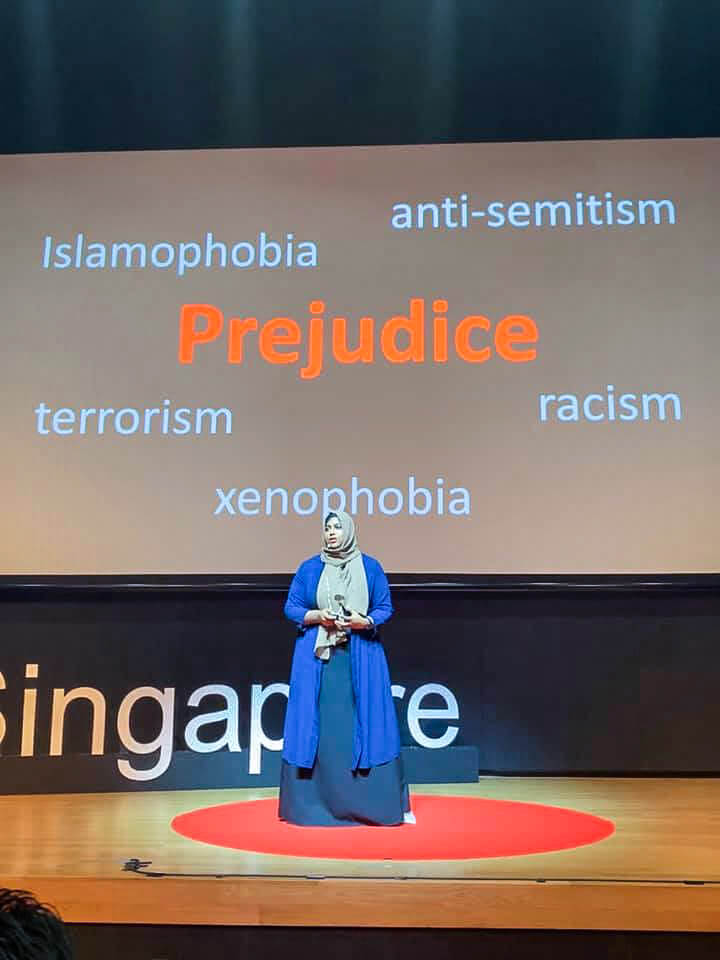 Faheema speaking at the December 2019 TedxSingaporeWomen

While both multiculturalism and inclusiveness can be deemed as prominent in Singapore, Faheema says that there is still much to be done to further improve Singapore’s social and racial awareness. To start off, we need to look at raising the level of cultural intelligence in individuals and reducing racial stereotyping.

“For over 50 years we have had social engineering and many grassroots, as well as non-profit activities, that aim to strengthen social cohesion among these different cultures. Yet, many of us still do not know much about the minority communities in Singapore.”

“At a macro level, [our inclusiveness] is satisfactory. We are doing much better than many other countries. We do not see any nation-wide bias or discriminatory behaviour that excludes anyone because of their race or religion. However, we need to zoom into the micro-level. For instance, dietary concerns often divide staff at workplaces. What are bosses and the HR community doing about this? I have parents who tell me that their child was called ‘dark’ by her school mates. How are schools handling this? Stereotyping exists, and that leads to self-exclusion,” shared Faheema.

Hash.peace is an activist movement that catalyses conversations about advocating cultural peacekeeping at a micro level, countering extremist ideologies and general education of multiculturalism and inclusiveness in Singapore. Faheema’s hope for hash.peace is to ultimately minimise and eliminate extremist thinking through cordial conversations over coffee with people and participating in peacebuilding causes around the world.

“I started hash.peace in 2016. It was a spin-off from my initiatives under the Muslim Youth Ambassadors of Peace (MYAP), led by Jamiyah Singapore,” Faheema explained. 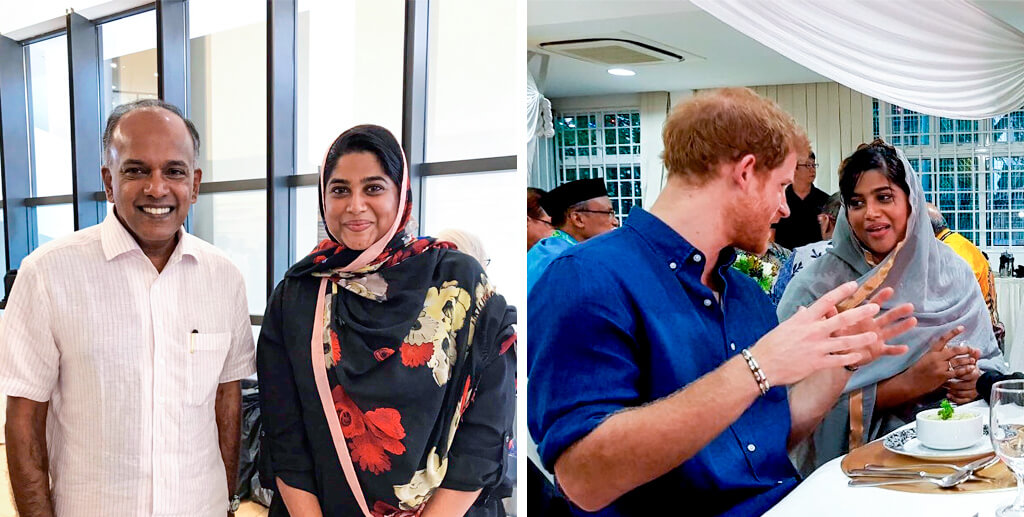 “From the age of nine, I grew up reading books like Diary of Anne Frank, Rape of Nanking, The Girl in the Red Coat, etc. These books drew my attention more than anything else. I have always had this strong inclination towards anti-war and dissent on extremist mindset—be it religious, traditions, ethnic or anything. When I was studying the ‘Public International Law’ course at SMU under Professor Mahdev Mohan, I studied cases such as the Bosnia genocide heard at the International Court of Criminal Justice. All these, accumulatively over the years, have strengthened my anti-war sentiments.”

The incident that has pushed Faheema to kickstart hash.peace was when a taxi driver asked her if she knew how to make bombs, four years ago. Realising that stereotyping, racial insensitivity and racist jokes were still rampant on a micro-level, Faheema decided to take the first step towards better cultural intelligence among Singaporeans.

Faheema was invited speak at the TedxSingaporeWomen in 2017 and more recently in December 2019. Here is the recording of her 2017 talk:

With every non-profit organisation comes the challenge of getting funding. Faheema also realised that it was a little harder than anticipated finding the right people who can or are able to commit to the cause.

“We can definitely do much more if we have sufficient funds to hire a full-time administrator. At this point, most of the hash.peace initiatives are in small scale, and self-funded as we believe in micro-level targeting. In addition, sourcing for funds will mean ‘stakeholder management’. With introducing new stakeholders comes the risk of overriding the initial intention of the cause, so we will need to think about this carefully.”

“Now that I’m with IRO, my time is stretched out between full-time work, family and hash.peace. On top of that, it’s also hard to find people who are able to commit to it because of these reasons as well.”

With everything she has on her plate, Faheema always finds it both motivating and comforting to turn to books after a long day.

“We are not facing or doing anything that which has not been written before. Terrorism and violent extremism are not new. Reading helps you to connect with history, views, perspectives, and much of what I know comes from reading. I also consciously make an attempt to be objective; especially when I read about terrorism linked with Islam, and regularly keep in touch with people who have similar areas of work and interest. These are important ways to keep your spirits up.”

All in all, Faheema still thinks a lot can be done when it comes to promoting multiculturalism and cultural intelligence and she hopes to spread cultural knowledge and sensitivity as the years go by.

At this time, Hash.peace has been focusing on their ‘Heritage Saturdays’ initiative, where they visit cultural and racial sites and museums in Singapore to promote racial and cultural awareness; as well as revamping their theatre-style discussions. Interested participants or members can check out the hash.peace website or Facebook page to keep up-to-date with the latest information.

Watch Faheema in the SMU Changemakers series feature below: