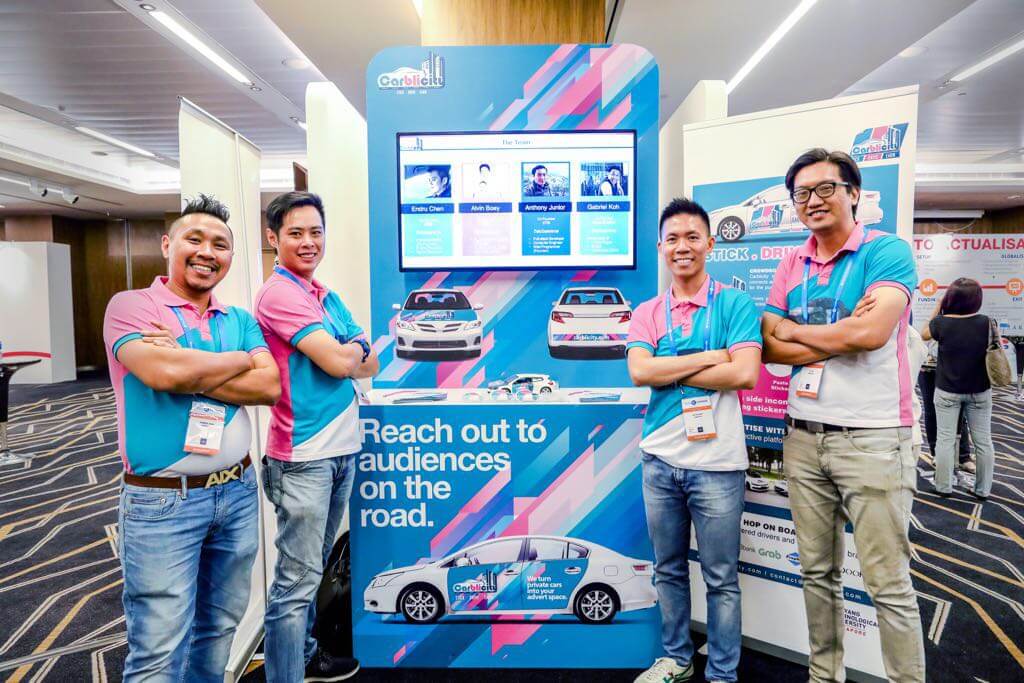 While running his previous start-up, Endru Chen had looked into advertising on taxis—a sight commonly seen in Singapore. To his surprise, taxi firms were charging exorbitant fees that he could not afford.

While Endru was not able to advertise his services through this medium, this discovery piqued his interest and he decided to do some research into transit advertising. The SMU Lee Kong Chian School of Business alumnus discovered that most transit advertising were primarily adopted by huge brands or big corporations who can afford it. SMEs, on the other hand, were missing out on this effective marketing medium due to their less-endowed budget.

“Something need[ed] to be done to fill this gap and disrupt the monopoly held by public transport operators on transit advertising,” said Endru. And so, Carblicity was born.

Carblicity crowdsources private vehicles, providing affordable transit advertising options to SMEs, and at the same time, allows for the owners of these private vehicles to gain financially. It was a harmonious ecosystem; and the cherry on top is that this is all achievable without the need to own any inventory. With its ability to provide affordable advertising mediums with value-added options such as in-car ads, screens and activations, it is not difficult to see why Carblicity has been such a success. 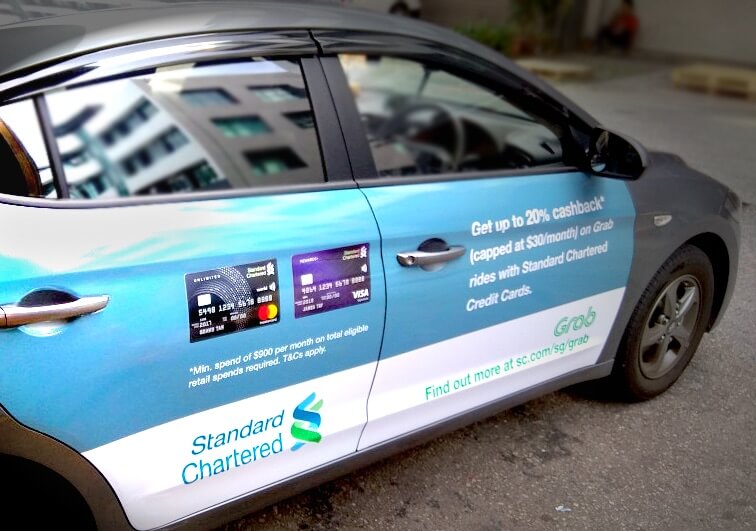 All images are courtesy of Carblicity.

Endru believes in “Out of Home (OOH) Advertising by Everyone, for Everyone”. He explains, “All spaces in public could potentially be utilised for OOH advertising through crowdsourcing to provide greater alternatives to advertisers with varying budgets.”

Not only is it solving the problem of expensive advertising for SMEs, it also disrupts the world of advertising—by introducing an unconventional medium to OOH advertising. Currently, Carblicity owns their own database of approximately 2,500 drivers who offer their private cars up for advertising. In addition, partnerships and agreements with major private-hire vehicle firms such as Grab and GogoVan provide access to more than 40,000 private hire vehicles, and 7,000 vans, buses and electric taxis. In short, it offers firms a massive advertising platform with extensive exposure—all at an affordable price.

But that’s not the only reason for Carblicity’s success. With the declining engagement rates from traditional advertising, this progressive form of advertising is far more engaging and successful at garnering attention. Boasting one of the highest engagement rates, Endru says, “As a driver, it is one of the few moments in their daily lives that they are not looking at a screen, but concentrating on their surrounding environment. People are [also] more likely to look at ads on private cars than on taxis.”

Endru attributes his success to the co-founding team of talented individuals who have been helping him through this entrepreneurial journey. Their unwavering belief in the vision of Carblicity, and their perseverance and willingness to go the extra mile, were what, Endru believes, pushed Carblicity to success. Endru also acknowledges that humility has played an important role in getting them this far—especially having their team recognise they have much to learn from veterans in the scene.

“We work very closely with our mentors and advisors who provide us with invaluable advice and guidance.”

Elim Chew, founder of 77th Street, was one of those mentors. She imparted her experiences, as well as guided them through setting up Carblicity—which she ultimately invested in and became a shareholder.

Endru also mentions SMU Business Innovations Generator (SMU BIG) as part of his success. Stating that SMU BIG was instrumental, especially through the multiple stages of setting up Carblicity.

Despite all the help that they have received, Endru did face a fair share of challenges. The toughest challenge was sourcing for funds for Carblicity.

“We tried, unsuccessfully, to raise the funds required during our last round at the end of 2017. We were good at running the business operationally, however, fundraising was a different ball game that none of the founders had any experience in.”

Endru recalls that it was a steep learning curve, especially given that they were running the business operationally, at the same time. However, persevering through this obstacle, they learnt from their failures and have since reopened their pre-series A round. Now, better equipped at catering to investors’ needs, Carblicity has since raised a total of S$200,000, nearly a third of what they were planning to raise.

“If you believe in your cause, beyond financial gains, then grinding through it makes it all worth it.”

The journey was not an easy one, and to Endru, “launching your own startup was not all ‘cool’ and glamour.” The startup journey was often speckled with chaos and uncertainty, and requires one to have a lot of grit to get through it. Be prepared for sleepless nights and empty wallets—both of which Endru had endured many times. However, to aspiring entrepreneurs, Endru has this to say: “If you believe in your cause, beyond financial gains, then grinding through it makes it all worth it.”

Carblicity is currently in the midst of developing a proprietary technology that will enable them to provide key performance metrics to advertisers. With the new technology, besides mileage and routes travelled by drivers, Carblicity will now be able to track the number of impressions generated, down to the actual conversions from impressions, call to action, to actual sales. With regional and global expansions in their near future, Carblicity will only be growing bigger from here on out.

This article was originally published on the SMU Institute of Innovation & Entrepreneurship website.

Wishing He Had a Mentor in University, He Decided to Start a Mentorship Initiative for His Juniors
My SMU Social Sciences Freshman Year: Samantha Lork