Working and Living in Myanmar 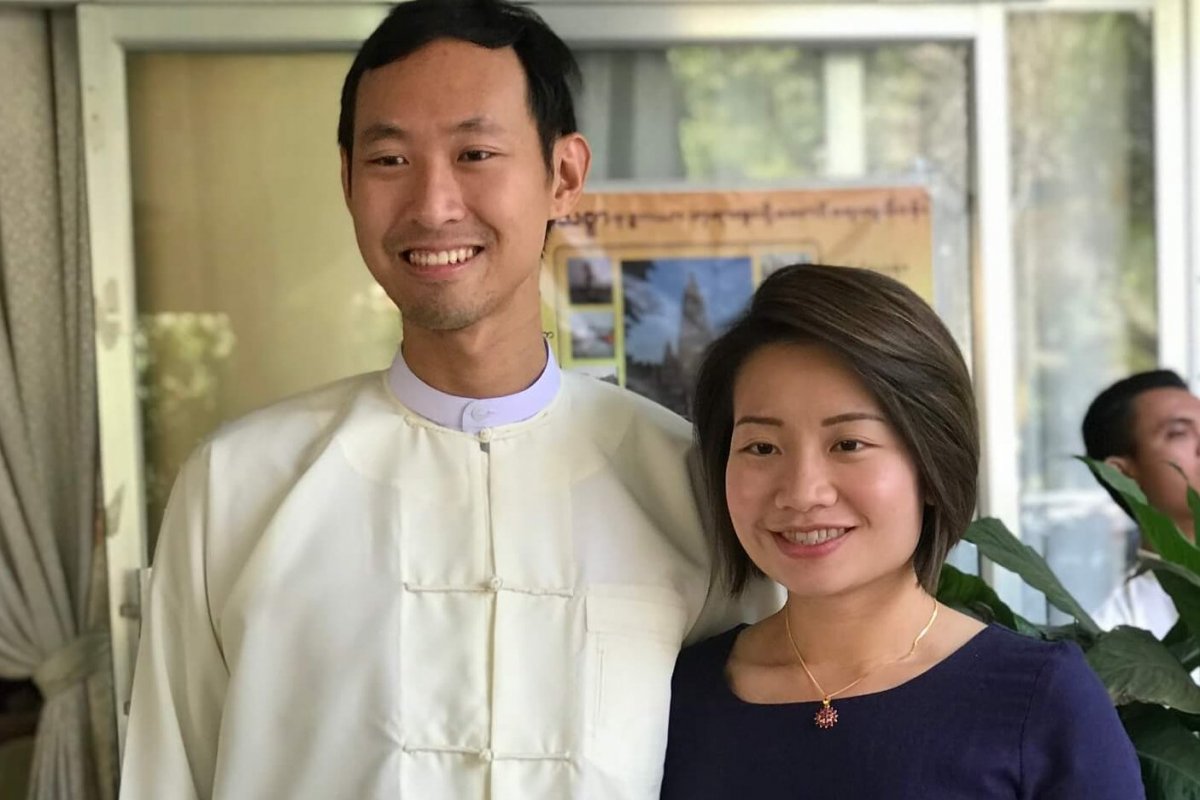 Every morning, we’re greeted by the Grab taxi driver who fetches us from our apartment block in his white Toyota Probox.

We were told when we first arrived in Myanmar in 2017 that being able to direct the taxi drivers in Burmese was a useful skill for a smoother ride. In terms of public transportation, taxis are a relatively safe and reasonably priced option to move around in Yangon, but the drivers typically speak little or no English. 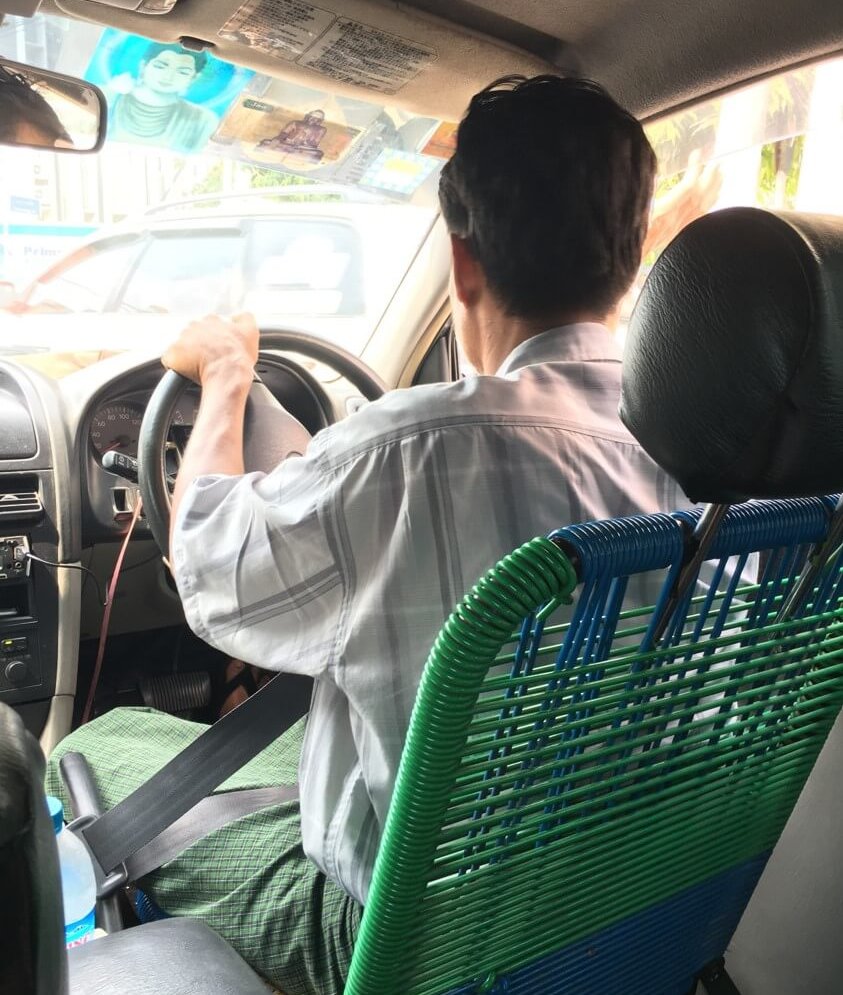 Unconventional definition of a car seat

For the past year, we have been taking the same route from our home to the office, and the sights and sounds during our early morning commute are always interesting and everchanging. Since April 2017, we’ve seen traffic lights being installed along the main Sule Pagoda Road; and we’ve witnessed the opening of Junction City Yangon, a world-class mixed-use development located in the heart of the city, which comprises Yangon’s first skyscraper—a 23-storey Grade A office tower, a shopping mall with international brands such as BreadTalk, KFC, Hugo Boss, Timberland etc., and the Pan Pacific Hotel. Sometimes, we almost think we’re in Singapore because we notice new projects springing up frequently all over downtown, such as Yoma Central and The Heritage Hotel Kempinski Yangon. 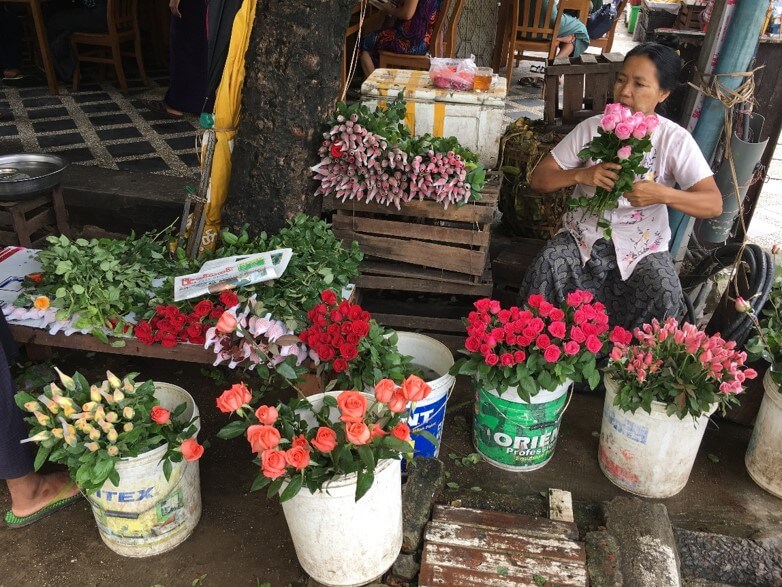 Typical scenes at the street where we live

Yet, even with these developments springing up over such a short span of time, Yangon still retains the old-world charm reminiscent of 60s Singapore. Road-side vendors selling fruits and flowers, locals selling their homemade goodies from a makeshift wooden table, and trishaw riders cycling to their next destination. As Singaporeans are more acquainted with the concrete jungle, this blend of new and old is extremely refreshing and sums up the appeal and excitement of living in a city like Yangon. Myanmar may have been a late bloomer in the arena of international trade, large multinational corporations, and fancy technology, but there is so much potential waiting to be tapped here.

James and I have been with Deloitte since we graduated from SMU’s School of Accountancy in 2010 and 2012, respectively. Both of us are currently Audit Managers and have survived numerous peak periods in Singapore, occasionally clocking record-breaking 22-hour work days just to meet client deadlines and averaging 12-14 hours daily during peak. People often say that the “lifespan” of an auditor is usually 3 to 5 years, yet somehow both of us have outlasted our “expiry dates”. As Deloitte offers a good mix of extra-curricular activities such as sports and community outreach opportunities, before we knew it, the time had flown right by.

Completing an audit and churning out financial statements are satisfying in their own way but at the end of the day, we felt that something was lacking and yearned for more.

In December 2016, amidst the mountain of emails which we received daily, there was one particularly interesting email calling for people to take up a role in the Deloitte Myanmar office. And the rest they say, is history. 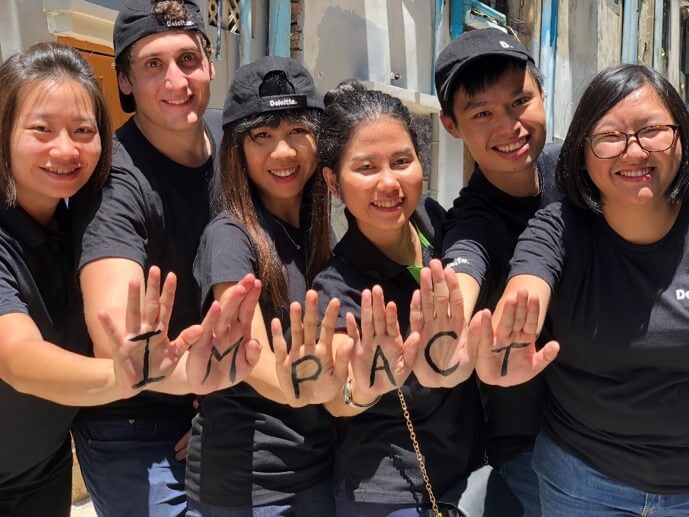 Ghislaine and James with colleagues from the Deloitte Myanmar office

We have always loved travelling. Back in SMU, both of us had the opportunity to participate in some of SMU’s overseas programmes—James led the SMU Zero Limits cycling expedition to Alaska in 2008, whereas I completed the summer school programme to Vancouver, Canada in 2009 and the 6-month exchange programme to Bordeaux, France in 2011. Whenever possible, we would also go for holidays with our families to relax and spend time with the folks (very important, no matter how busy you are!).

Travelling to new places and immersing ourselves in new cultures created many learning opportunities and developed our adventurous sides. Also, SMU has a very diverse student population which encouraged us to embrace differences and appreciate similarities.

There were a couple of reasons why we chose Myanmar—the job description of the role in this newly opened office was a significant change from our existing role, and the uncertainty (or rather limitless possibilities) surrounding the new role and the destination was very attractive. Our role in the Myanmar office is a mixture of operations, business development, training and managing audit engagements. It requires us to draw on our past experience as Deloitte auditors, whilst maintaining an open mind in order to understand the people and the country and adapt to the different culture. What works in Singapore or Thailand or any other Southeast Asian country may not be applicable in Myanmar, so it was necessary to be patient in our approach while balancing the needs of the stakeholders.

We admit that every day has been challenging. At work, we’ve experienced facing issues which have no prior references, having to make tough decisions on issues surrounded by probabilities and what-ifs, and taking into account language barriers and cultural differences while building the trust and connecting with the locals. We are thankful that we have received overwhelming support from our local team in Myanmar, who have such a positive attitude towards learning and have been very open towards our ideas and suggestions. We appreciate that the local team has come a long way in a short period of time (e.g. from paper-based to computers within 2 years), and we are encouraged to know that slowly but surely, they will be able to hold their own.

It also helps that the Burmese are very kind and hospitable by nature, which has made our time in Yangon very pleasant. Some memories which we will take back with us to Singapore would be: trying our colleague’s homemade Mohinga (what we believe is Myanmar’s national dish); attending our colleague’s traditional Burmese wedding; and enjoying the organic (and super sweet and fragrant) mangoes which our audit partner will specially order from her friend’s plantation. 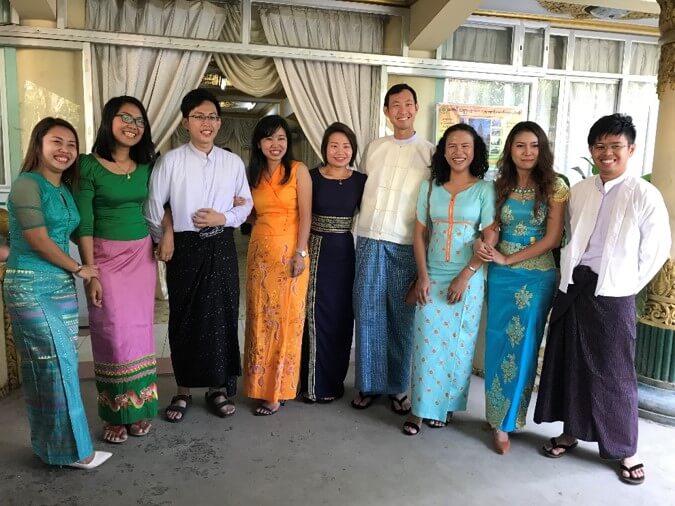 Attending our colleague’s wedding at a monastery

Work aside, we felt the effects of the differences between the living environment in Yangon and that of Singapore. Frequent power cuts, flooding during the monsoon season (which lasts 6 months and unfortunately no tennis for us!), terrible traffic, poor road safety, potholes in the pavements and roads, and so on. Don’t get us wrong, we are aware that Yangon is still a developing city and are taking steps towards bettering the present situation, but we never fully appreciated the convenience, cleanliness, stability and safety of our lion city until now. Since this is an 18-month secondment and the longest we’ve ever been away from Singapore, even the smallest things back home such as mum’s cooking, McDonald’s hash browns or kopi-c siew dai are sorely missed.

We joined the SMU Myanmar Alumni Chapter as well, and were fortunate to connect with other SMU alumni—a mixture of returning Burmese and foreigners like ourselves—who were working in Yangon.

On hindsight, would we still have made the same choice and come to Myanmar? Definitely. 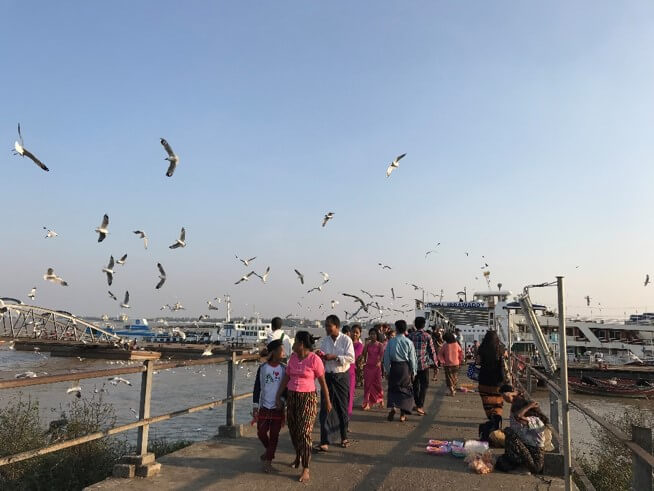 This experience has been enriching in so many ways—be it in our personal development, communication skills, exposure to different types of businesses and people, and being resilient in the toughest of situations. It is fairly common nowadays for people to apply for international postings, so if we had one piece of advice for people looking to go overseas, we would say, “Be bold and adventurous, accept the uncertainty and don’t be discouraged in times of difficulty.”

2 thoughts on “Working and Living in Myanmar”

Taking HR to the Next Level With People Analytics
The Truth About Getting a High Salary After Graduation: Expectations vs Reality