Sponsorship (NOT Mentorship) is the Key to Management Success Behind every successful manager is a mentor who has guided him or her through their career with advice, but true high fliers lean on a sponsor.

The essential difference between a mentor and a sponsor is in the depth of the relationship, according to SMU PhD in Business alumna Jovina Ang, who is now a lecturer at the National University of Singapore Business School after a career working at blue-chip technology companies around the world.

“A mentor basically gives advice, but there’s no commitment or accountability in terms of your growth. However, a sponsor takes time to invest and is accountable, is committed to your growth and your career,” Ms Ang explains.

This means that it is much harder to be—and find—a sponsor than it is to be a mentor. As Ms Ang says, “Anyone can give you advice. But a sponsor is someone who is powerful, who has a lot of influence, who is very well networked. This is basically someone who is interested in seeing you progress.”

The relationship that develops between a sponsor and their sponsee is more complex and nuanced than that between a giver and receiver of advice, particularly as the sponsee climbs up the corporate ladder.

“This [sponsor] is willing to put in the effort to groom you, help you in terms of equipping you with leadership and general management skills. Teaching, opening doors, fighting for your promotion, giving you protection,” Ms Ang elaborates.

In the upper echelons of management, important decisions often have personal, as well as commercial ramifications.

“When I was in Microsoft, to go high up the corporate ladder, you’ve got to have worked in a different geography. That kind of decision cannot just be made from a professional perspective,” Ms Ang, who has been both a sponsor and sponsee, says. In such circumstances, a sponsor needs to be equipped to give meaningful and helpful advice, and support their sponsee in their decision.

“As our research suggests, sponsors, very reasonably, expect outstanding performance from sponsees. After all, they are sticking their neck out for sponsees by promoting them. Over time, this quid-pro-quo hopefully develops into a deeper, trusting relationship between sponsor and sponsee, that might even continue when individuals change employers.”

Practically, the sponsor has to be someone influential within the organisation, so that their support counts when it matters, Assoc Prof Reb says.

“In addition to that, you’d ideally want a sponsor who sponsors you out of genuine interest and cares for you, and who doesn’t just support you because of the benefits it brings to him or her,” he says. “Our research suggests that many sponsors are motivated to sponsor as a way of giving back because they received the benefits of sponsorship earlier and out of a genuine desire to see others flourish.”

What motivates sponsors to help and nurture talent is also complex. As Assoc Prof Reb explains, individuals often feel that they want to give back out of a sense of debt to their own sponsors.

“Another, more pragmatic, reason is that successful sponsees can also provide a powerful resource and network for sponsors that help them achieve their objectives with respect to what they want to achieve in the organisation and in their career,” he says.

Others believe that it enhances their reputation.

“If you are seen to be developing key talent, then your own reputation also goes up, and you get peer recognition,” Ang says. Some people see becoming a sponsor as an opportunity to further their own learning and develop, while some do it “to satisfy a psychological need,” she adds.

Aspiring managers need to think about finding sponsors as part of their career planning, both Ms Ang and Assoc Prof Reb agree.

“Sponsorship can help to open doors when you’re just getting into your career, but it matters a lot more the higher up the organisational hierarchy you get,” says Ms Ang, who also advises that sponsees seek out more than one sponsor, to limit the risk of one moving companies. “If you work in a highly political environment, your sponsor can disappear,” she warns.

Assoc Prof Reb suggests that candidates do not wait too long to seek out sponsors. “Sooner is better than later,” he says. “One way to look at it is to say: whenever one is ready to be assigned a new challenge, to be placed in a new assignment, to be promoted. Overall, though, thinking about sponsors should be an essential part of one’s career planning.” 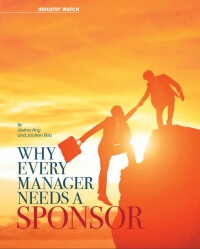 Who Says Study Missions Are Only for Students?
Human Skills Are as (If Not More) Important as Technology For Industry 4.0