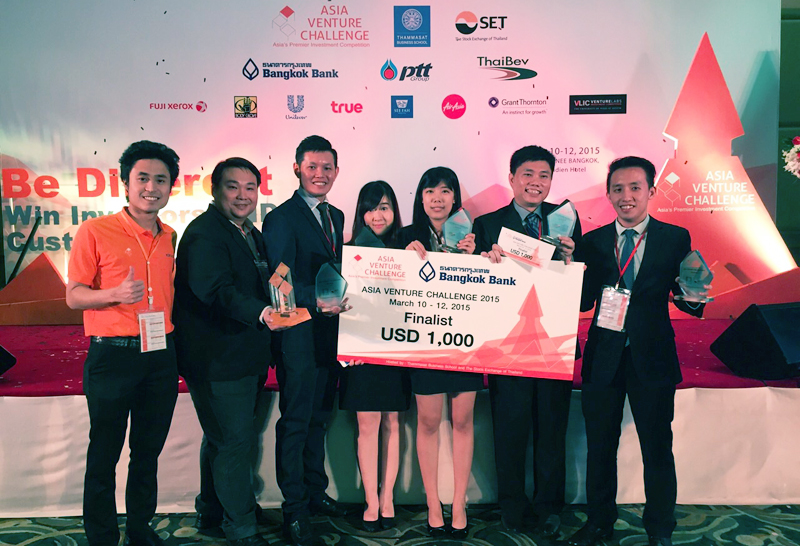 From relative strangers to a winning team: the DingGo team from SMU’s Master of Science in Innovation (MI) shares the details of a journey that began last November, when their mobile app idea was chosen to represent SMU in the annual Asia Venture Challenge business plan competition.

Though our team members didn’t know each other well at first, we became fast friends when we began meeting up once or twice a week (in addition to our other group project meetings) to prepare for this competition. Our initial euphoria of being nominated as the team with the best business idea died down very quickly, replaced by bouts of emotional stress. How could a bunch of struggling amateurs like ourselves pitch against some of the most well-known business schools in Asia? 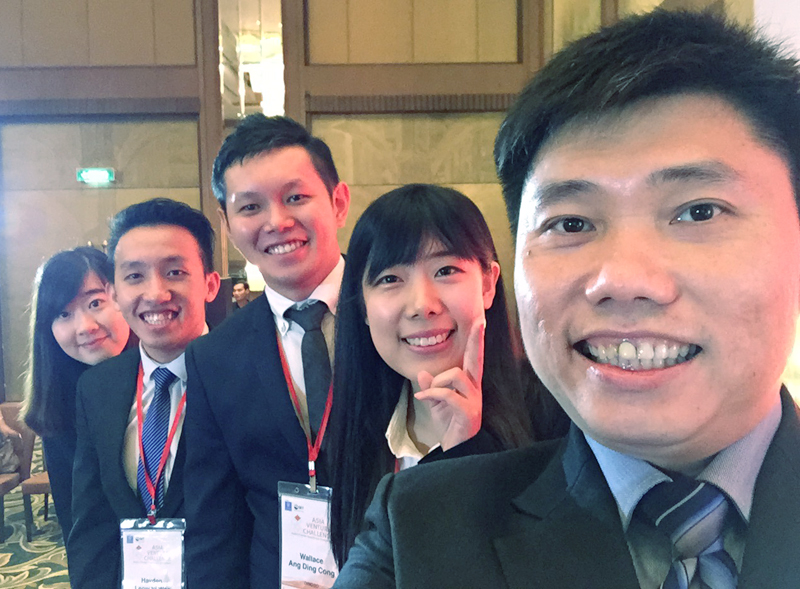 Fortunately, our professors – Thomas Menkhoff and Philip Zerrillo – were incredibly encouraging. In response to our stress over the responsibility of upholding SMU’s reputation, they told us: “Don’t worry about it, just try your best.” They also put in place an experienced advisor, Winston Wee, who took part in the same competition two years ago and advised last year’s SMU team as well.

We had just three months to prepare several things:

At the same time, we continued building the business by continuing our conversations with café and restaurant owners as part of our business model validation, and working with freelance tech coders to design and develop the prototype of the mobile app – the centrepiece of this business.

Before we knew it, we were all on the flight to Bangkok on 9 March this year. I didn’t even have the luxury of napping on the short flight, as that was the only time I had to craft the script for the next day’s 60-second rocket pitch day. But when I rehearsed the pitch in front of my team mates for the first time that evening, all of them did not like it, and felt that it had too much of a “boring commercial” tone to it. Overnight, I had to totally revamp the pitch to make it more engaging in the form of a story. On pitch-day morning, the second version passed muster with the team – thanks to three bottles of Red Bull and two hours’ shuteye on my part! Even though we did not win the best rocket pitch, I was glad to have delivered it confidently and without tripping over my words. 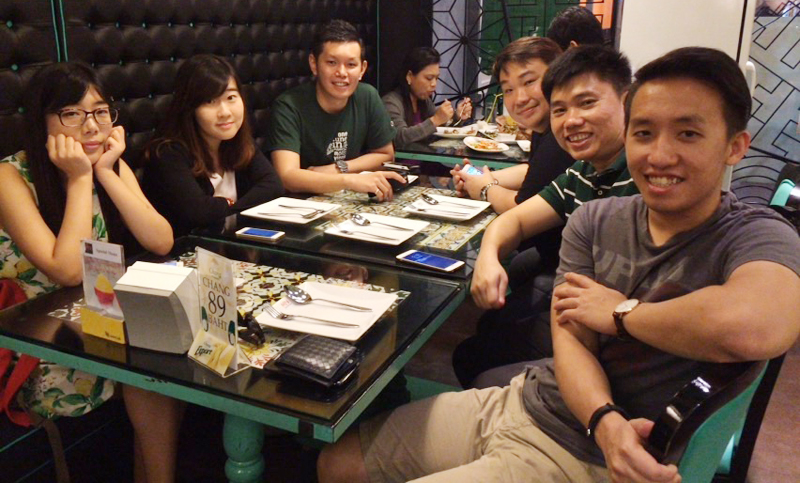 Setting up the trade booth was more fun than tedious, though we were shorthanded as our team members Yuki and Krystal were called away midway through the setup for a door-stop interview. The interview was with a Thai-based Chinese TV channel crew from MGTV, and while I could hardly understand half of what they said, it goes to show there are advantages to having a diverse team of people with different cultural and linguistic backgrounds.

At the end of the first night, we had to forgo our longing for a relaxing Thai massage, as the division pitching would start the next morning. Not only did we have little time to rehearse, we were competing against the strongest Thai team from Thammasat Business School in the same division. Given the rumours that the Thammasat and Chulalongkorn teams had started preparing for this competition a year ago, we endured our back and muscle aches, and soldiered on. 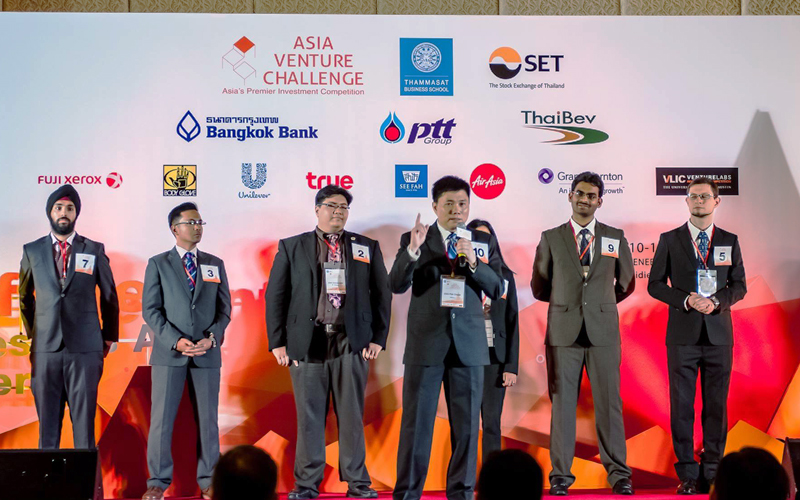 The division round was tough. There were 12 teams competing in three divisions, facing judges who were well-known in Asia’s startup scene. We emerged as second team in the division, after Thammasat, which meant that we had to return that afternoon for another “play-off” round with the two other second-placed teams (NTU and Malaysia’s Putra Business School). Frankly, the feeling was like after running a marathon and coming close to the finish line – and then being informed that there was another 42 km distance to run!

Our perserverance paid off: we won the “play-off” round, and were propelled into the finals with the teams from Thammasat, Chulalongkorn, and Philippines’ Asia Institute of Management. It was here that our team’s fighting spirit and dynamics came to the fore as the probing and difficult questions interjected fast and furious (like machine-gun fire). As a team, we were all the more determined to stick together and fend for each other. Wallace spoke out confidently about his know-how in the F&B industry, Hayden articulated with passion the technology that came with our business, and Yuki and Krystal pitched the pain points and the management team respectively with such crystal-clear fervour that was unseen before.

The final pitch was the toughest of all the rounds, and not just because we were presenting on a raised stage in front of a large audience. The judges were able to pin-point specific flaws in the financial spreadsheets, and unearth contradictory portions of arguments in the business plan. It was a humbling experience, but in the end, we survived it all and emerged third overall. 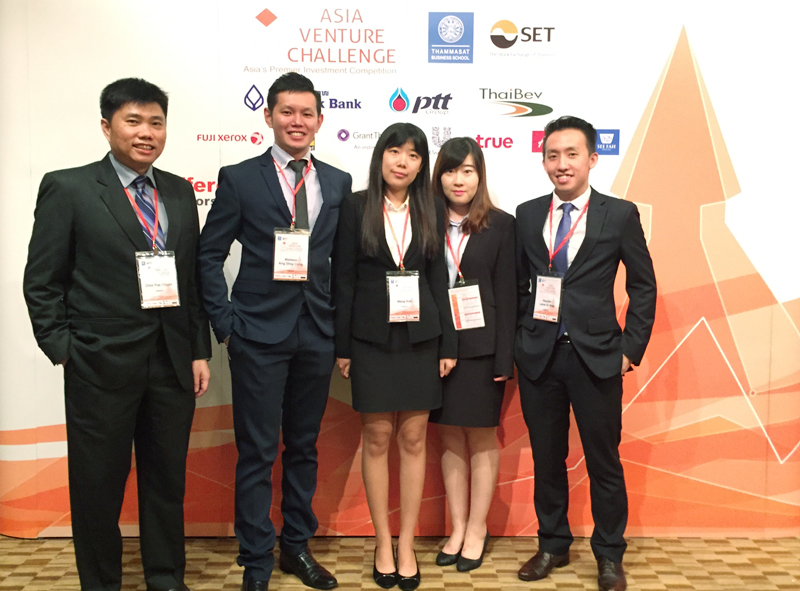 The experience of competing in the Asia Venture Challenge was both amazing and enriching. There was never a dull moment, and we truly enjoyed the immense experential learning, enthusisasm, and just sheer bonding within the team. We may even be willing to do it all over again, should the opportunity arise!

That beautiful freshman year
A cheat-sheet to SMU jargon