6 Entrepreneurial Tips to Give Startups a Head Start 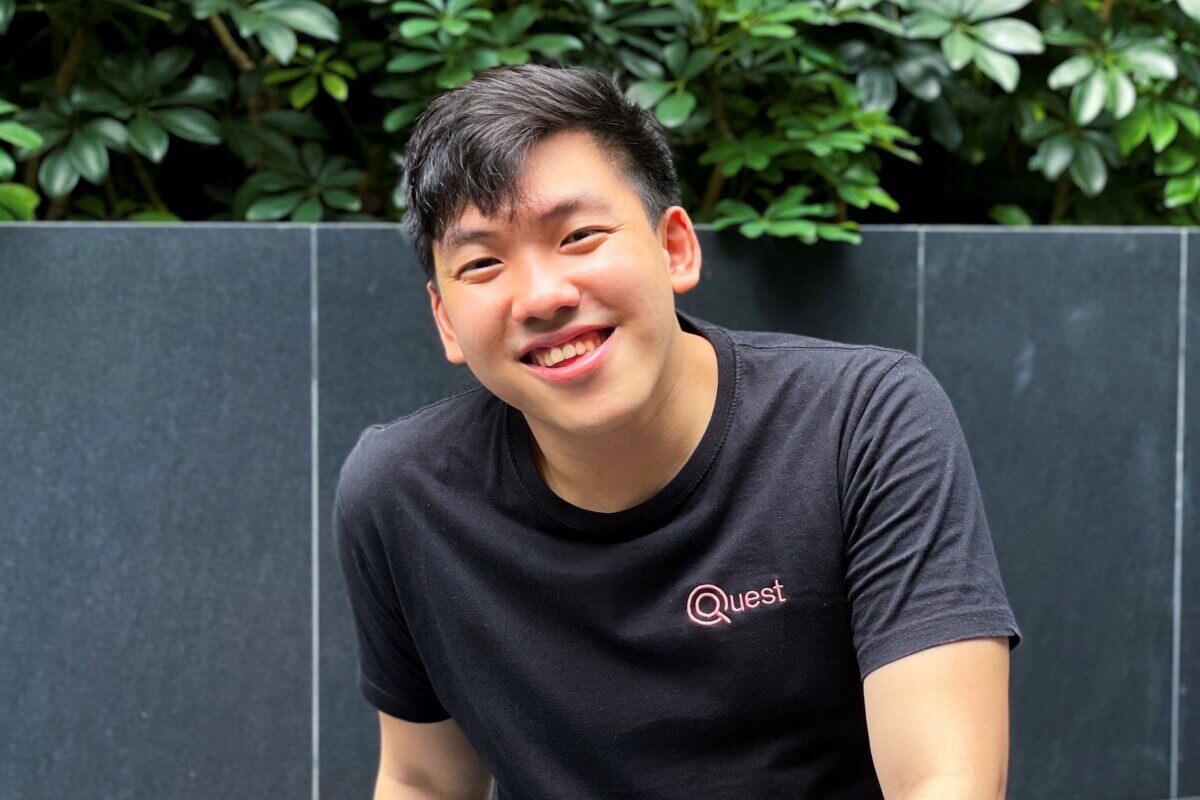 Since young, Evan Chow knew he wanted to be an entrepreneur. When Covid-19 hit and the gig economy started picking up in Singapore, the Year Three SMU Lee Kong Chian School of Business undergraduate saw an opportunity for business. Together with his friends and fellow SMU undergraduates, Craig Choy and Matthew Wu, the trio set out to build a platform – known today as Quest.

Conceptualised to build a community that brings gig workers and customers together on a single app, the idea was to empower individuals to realise the value of their talents by creating a platform for them to showcase it to others in return for a fair, competitive remuneration. Prior to launching, Quest had already garnered immense support, securing over $70,000 in grants. This included $50,000 in pre-seed funding from Enterprise Singapore’s Startup SG Founder Grant, and $20,000 from the National Youth Council under the Youth Action Challenge. Quest is also currently incubated at SMU Institute of Innovation and Entrepreneurship’s (SMU IIE) Business Innovations Generator (BIG).

In June this year, the Quest app officially hit Apple and Google Play stores. Welcoming over 23,500 users before the third month of launch, Quest achieved over $150,000 in Gross Merchandise Value (GMV) through peer-to-peer transactions from both their mobile app and telegram channel. Along the way, Quest has also hit some other unexpected milestones. For instance, it reached the top spot on Apple’s Lifestyle charts in Singapore, top 5 in the overall category, and has consistently been ranking amongst the top 10 in the Lifestyle category. 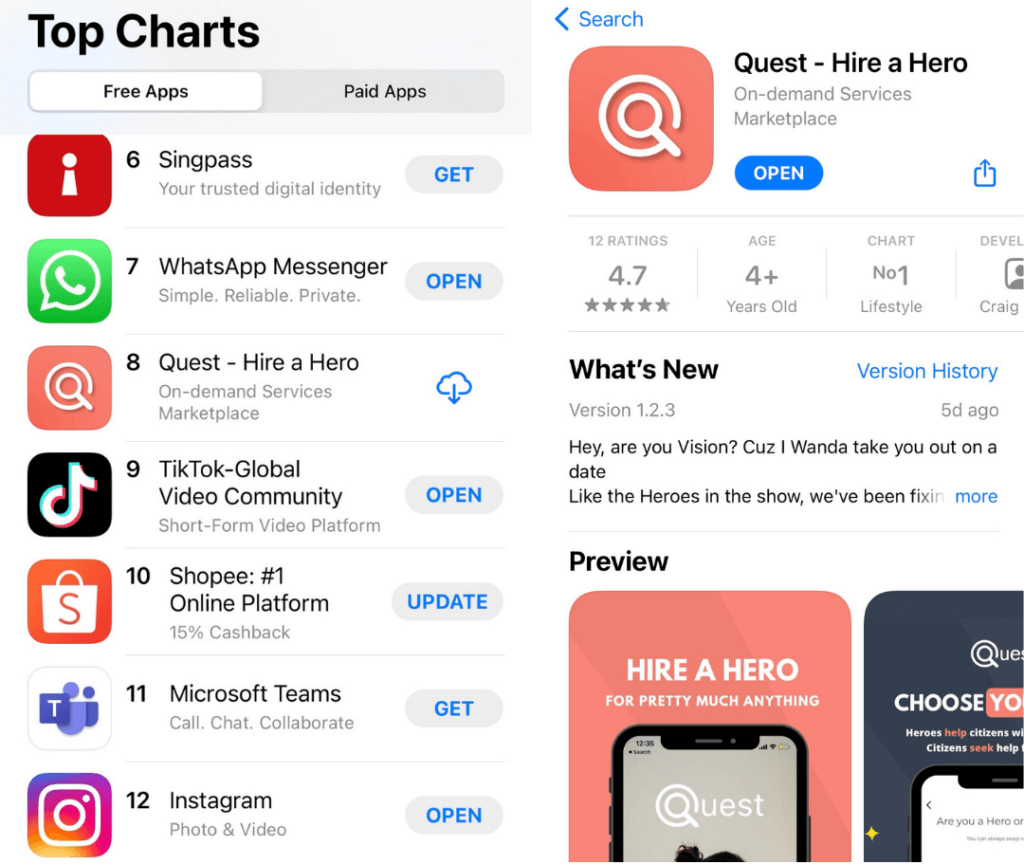 With his experience in Quest, Evan shares with us six tips on how entrepreneurs can get a head start when setting up their first business.

1. Make sure there is market demand for what you offer

Back in December 2020, when Evan and his friends had just committed to building the Quest app, they started thinking about just how useful their app was going to be. With that consideration, they started a provisional Telegram channel as part of their Beta phase testing. While serving as a basic prototype for the app, this zero-cost platform contained all the quintessential aspects of Quest.

Within six months, the Telegram channel hit 5,000 subscribers and the trio amassed a Gross Merchandise Value (GMV) of over $100,000 through peer-to-peer transactions. Despite their initial doubts on the business idea, the numbers didn’t lie and they could confirm that there was indeed a market demand for what Quest offered. With this green light, the team went full speed ahead to build the app.

2. Don’t let your inexperience be a handicap

As undergraduates who had not yet embarked on any internships, the co-founders did not have any relevant experiences to fall back on. Additionally, Craig was still learning how to code in the classroom when he was tasked to build an entire app from scratch. 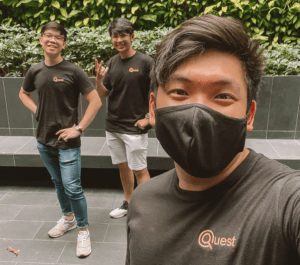 Evan (foreground), Craig and Matthew were all freshmen at SMU when the initial idea of Quest was first conceptualised / Photo credit: Evan Chow

“We were terrified that Quest was going to fall flat on its face. In retrospect, that fear fuelled us and kept us constantly on our toes and eager to learn more. There are many ways to make up for lack of experience. For one, the three of us participated in several competitions to pitch our idea, learn from and network with industry experts,” recalls Evan.

Another resource to tap on is mentorship; reach out to mentors who can provide advice, guidance and share their own personal experience to help you grow. In Evan’s case, he found help through The Mentoring Circle, an SMU undergraduate mentoring club, as well as the Entrepreneurs-in-Residence at the Institute of Innovation and Entrepreneurship (IIE).

Inexperience can be an asset if you learn to use it well. As young adults, the Quest team was keenly aware of the hottest trends which they lavishly tapped on and built into their app. For instance, Quest users would be familiar with the app’s Hero/Citizen duality. This concept taps on gamification in UX, which incorporates elements of interaction and fun to encourage user engagement.

Inexperience may be a hindrance but you don’t have to let it become a handicap.

3. Tap on TikTok, but create content that rises above the noise

TikTok can be used for more than mindless entertainment. In fact, don’t underestimate its virality and power! If harnessed well, TikTok can be a platform that drives business growth. In Quest’s case, the platform’s performance and audience metrics were used to gain insights into how their viewers reacted to their content. From there, the team fine-tuned its marketing strategy.

“We’ve had some of our busiest growth days thanks to TikTok, precisely because short-form videos feed into the demand for instant gratification that’s so popular among viewers,” shares Evan.

If you’re a business and not on TikTok already, definitely consider getting on board. But a word of warning: be strategic with your content or you’ll risk being drowned out by the noise.

Teamwork makes the dream work. This saying is apt to any business but it’s especially crucial for a startup. While getting your initial idea off the ground, you need to pick the right people to do it with you. From co-founders to interns, beyond their skills and competency, Evan looks out for the right cultural fit.

“I personally believe that attitude triumphs aptitude. When it comes to hiring, resumes and prior experience are definitely important but ultimately, a person’s personality and attitude are what we’re looking at. It’s much easier to teach an individual new skills than to try to change their character,” observes Evan. 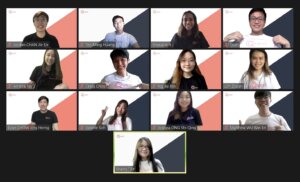 During the Phase 2 Heightened Alert period in May 2021, the Quest team worked tirelessly across its different teams / Photo credit: Quest – Hire a Hero

5. Brand awareness is make or break

Have you ever wondered what differentiates Starbucks from a cup of kopi peng from your local food centre? If the latter goes for five bucks a cup, the business is sure to go bust. Yet so many people are willing to spend their last few cents on a drink at Starbucks, or Starbies as they are affectionately called.

If you haven’t already guessed, Starbucks has nailed the brand game. Its logo – more than just a double-tailed mermaid in a sea of green – is a universally recognised crest synonymous with sophistication and style. That’s the result of an excellent marketing strategy.

In Quest’s experience as a customer-facing startup, brand awareness is especially key. On top of getting its brand name out there into the general consciousness, the team works to communicate a compelling narrative to their users to inspire downloads and engagement.

Who are we? What do we do? Why should people pay attention to us? If you’re a marketer or interested in starting your own venture, these are just some examples of questions you need to nail.

Find your niche, craft your story and then pitch it sincerely.

6. Leverage on the resources available to you in school

It takes a lot to build a business – the initial outlay, the ideas and the mentorship. No one can do it alone and Quest is no exception. The trio managed to achieve some success due to the generous support they’ve received from SMU. As student entrepreneurs, they were fortunate to have Quest’s growth incubated under SMU IIE’s assistance. IIE also provided the team with a co-working space, grants, mentorship and even subsidised legal help.

Additionally, Evan also joined SMU Eagles Inc., a student-led entrepreneurship club in SMU, where he is currently Vice-President. The club organises activities, ranging from networking sessions, masterclasses, to mentorship opportunities for students. As a first-time entrepreneur, these have helped hone his business acumen and shape him into an entrepreneurial leader.

“More than just the monetary benefits that come with a scholarship, it was really motivating to know that the school is supporting me in this journey. SMU is the only university in Singapore with an Entrepreneurship Major. Being able to directly apply the concepts I learnt right after class and even work on Quest as a class assignment had turned the tables, and showed me the advantages of being a student entrepreneur,” concludes Evan.

4 Ways We Can Learn Self-Compassion To Reach Our Full Potential
Olympian Sailor Kimberly Lim: Making Waves from Classroom to Regatta