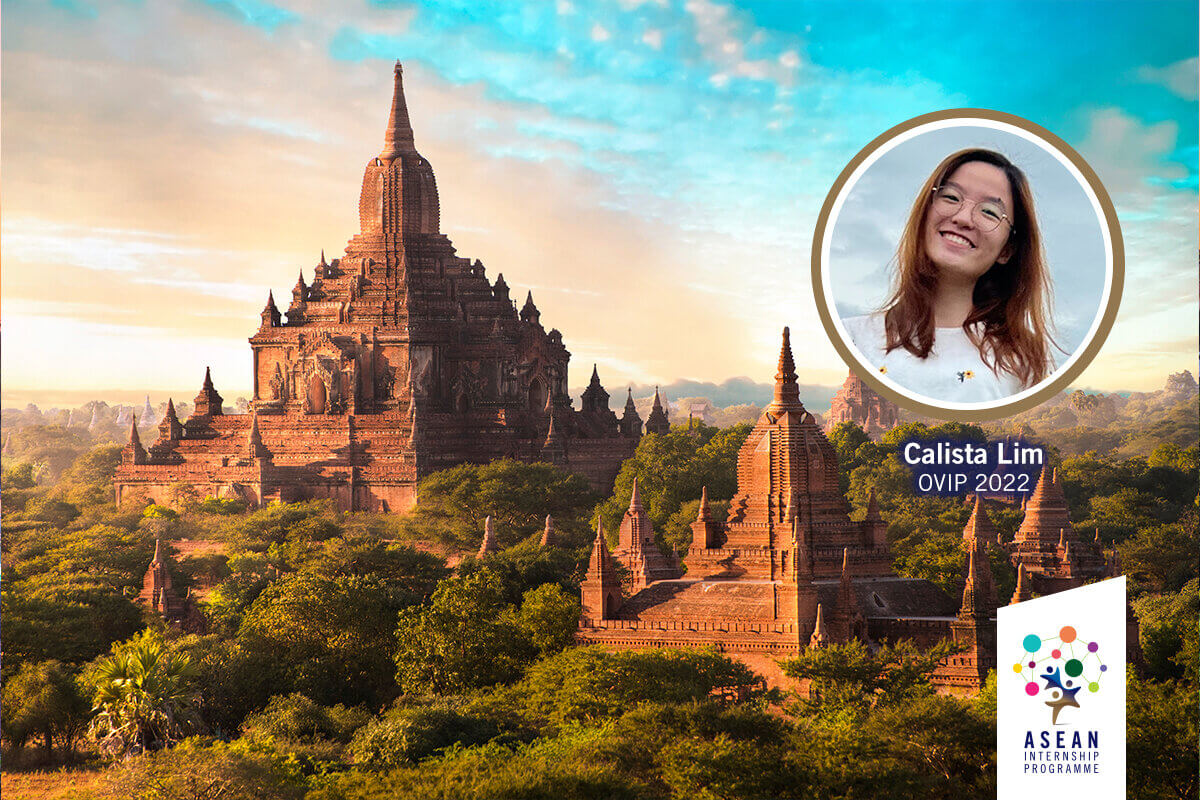 The Covid-19 pandemic continues to be a test of resilience. During its worst, the global health crisis completely shut down big industries such as tourism and travel. Many companies, big and small, were forced into closure as they could not adapt to the digital world. Meanwhile, forward-thinking companies that seized opportunities and moved with digitalisation stayed afloat – with some even thriving.

As someone eager to delve deeper into dealing with data, Calista leapt at the opportunity when she came upon the agency’s virtual Data Associate internship position listing on OnTrac. The second-year student was thrilled at the chance to put her learnings from SMU into real-life action.

Taking her first steps into the working world 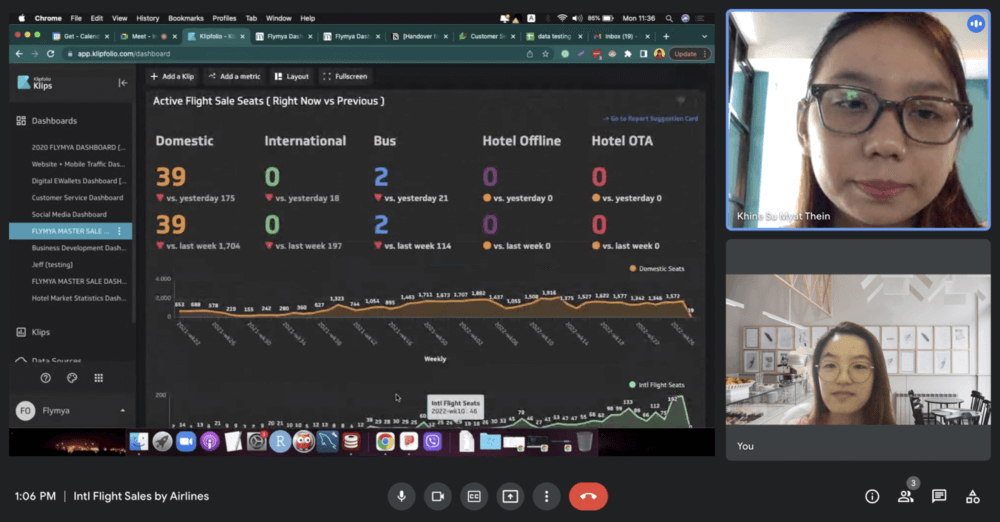 Calista (bottom) in a virtual discussion with her supervisor at Flymya

Calista fondly remembers meeting Flymya’s HR head when her internship first started, who gave her an introduction to the background of not just the company but also Myanmar as a country. Thanks to the session, Calista felt extremely welcomed to the company despite having never stepped foot into the company.

As a Data Associate Intern, Calista was given tasks to turn data into actionable information for Flymya’s Data and Marketing department. Her key project was to develop a sales prediction dashboard based on historical data using machine learning, and this was where she witnessed how foundational concepts picked up from modules such as Data Management and Introduction to Machine Learning can be applied to real-world situations. Her tasks ranged from creating SQL queries to fetch data, to creating visualisations for the company dashboard, which allowed Flymya to make informed and data-driven decisions.

Calista recalls one important lesson from her internship with Flymya — to be clear about the purpose and objective of one’s tasks. Reflecting on the work she had done, she realised that the real-world context of her internship taught her to question what the trends and outliers in her data visualisations meant to the business.

Putting her soft skills into action 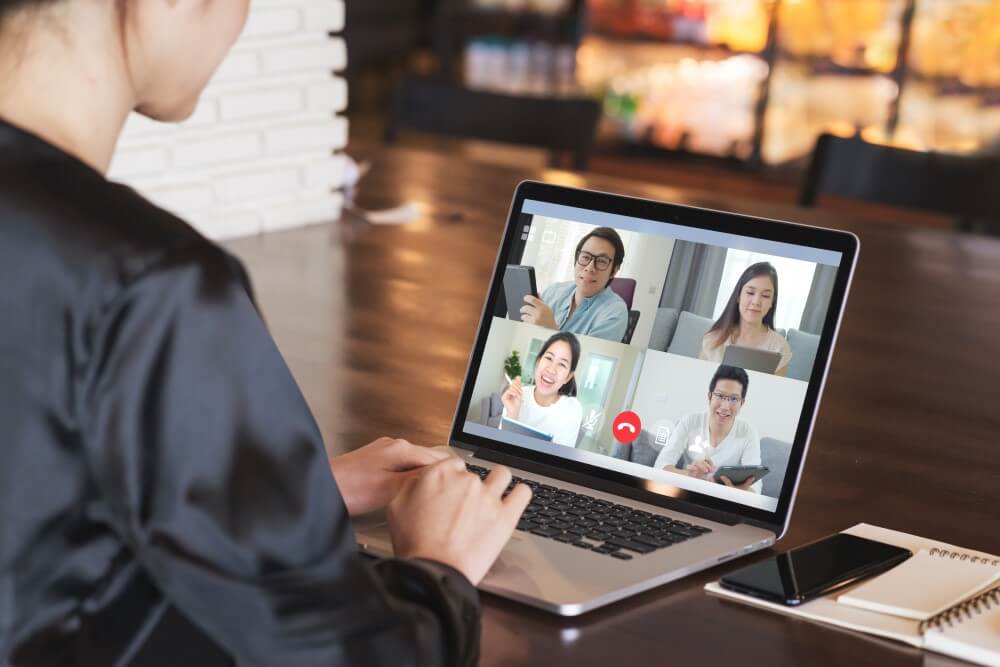 Despite her internship being held online, Calista was given many chances to grow in her communication and to build effective working relationships. Calista’s supervisor made the effort to include her in business meetings and also ensured that she was involved in the company. Through these, Calista grew to be proactive in proposing suggestions for improvement.

The project components in SMU modules had also prepared Calista well to work effectively with her colleagues — she knew that she had to communicate clearly and promptly, while taking ownership of her work.

Flymya’s company culture was also very open, something Calista recalls she had to adapt to. Chat groups and task boards were accessible by every employee in the company, with issues raised and each employee’s task being visible to all. Though it was a new experience for Calista, she learnt to become open-minded to different ideas and feedback, tremendously improving the quality and efficiency of her work.

Getting ready for her career 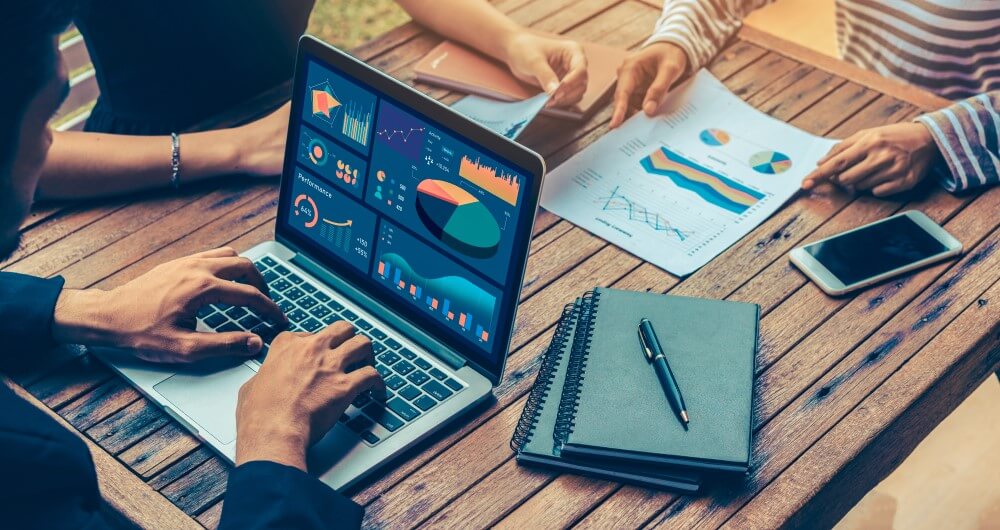 As Calista’s internship concluded, she found that her ability to work with people from different backgrounds had improved. While her colleagues could speak English, she took the effort to learn Burmese, allowing her to better understand her colleagues’ culture and communicate better.

This being her first internship in a technical role, Calista reflects that it had been a highly enriching experience. Beyond the hard and soft skills she had developed, she also says that the ASEAN Internship had broadened her mindset, giving her greater exposure to the cultures of other countries.

Speaking to other SMU students looking to develop their professional experience, Calista said: “If you are already considering an ASEAN Internship, go ahead with it. It will provide you with a new perspective of things. Especially in a globalised world, it is certain that you will come across colleagues from different cultures and nationalities.”