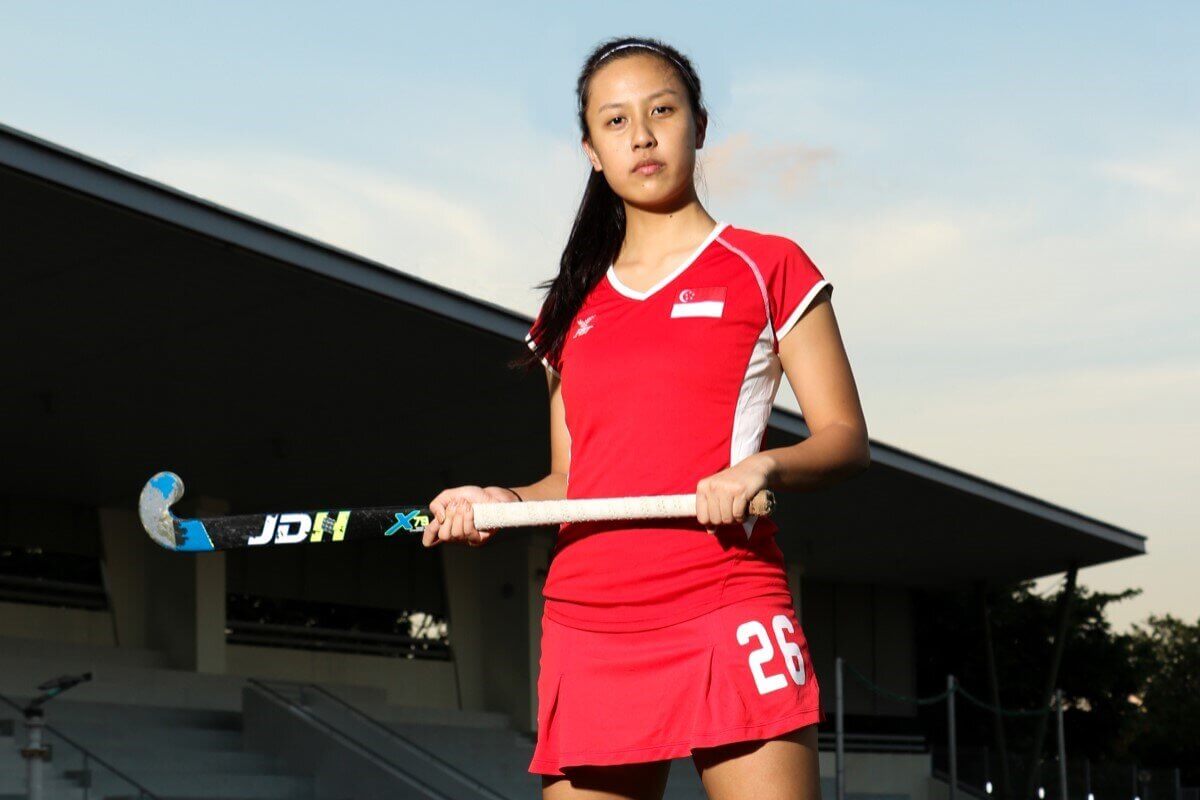 Fun fact: National hockey player Gene Leck might not be representing Singapore in field hockey today if it wasn’t for a stroke of bad luck back in primary school.

“I took up hockey as a CCA in primary school, but it wasn’t my first choice. In fact, I actually played basketball because my older brother was in the team, and I was really enjoying the sport,” shares Gene.

With her naturally athletic build, Gene recalls the hockey teacher-in-charge often asking her to join the sport back then. But she was already occupied with basketball and always politely declined. However, when Gene was in Primary Four, basketball was removed as a co-curricular activity (CCA) at the school due to the departure of the school coach.

As a result, Gene was given another opportunity to nurture her athletic abilities through hockey. “My first hockey training started during the June school holidays in Primary Five. And because I lived near the school, I would attend all four training sessions weekly – including the ones for the boys,” says the former Punggol Primary School student. Gene participated in her very first hockey competition – the Junior Hockey Tournament, in August that year. And the rest, like they say, is history.

When she joined CHIJ St Nicholas Girls’ School through the Direct School Admission programme, Gene represented the school in both the C and B divisions, and entered her first international tournament when she was just 13, playing at the U18 Asia Cup in Thailand as part of the Singapore Hockey Federation’s junior team for under-18s.

The following year, she also made her international debut for the senior hockey team playing in Malaysia for the Hockey World League Round 1. Despite being the baby of the team in age, Gene made up for it with her physique. “At 14, I was standing at more than 1.63m tall.”

Today, the second-year undergraduate at SMU Lee Kong Chian School of Business aims to pursue a marketing career upon graduation. But that hasn’t stopped her from training for hockey tournaments, even when faced with an extremely packed academic calendar. “When I was in polytechnic, I was very focused on hockey, going straight to training after school every day. So when I started in SMU, I knew I wanted to do things differently and experience a more fulfilling university life.”

Here, Gene shares a little more on how she intends to achieve that.

Has it always been easy to juggle both schoolwork and hockey?

Actually, it wasn’t always a smooth journey. I took a break from hockey for a year when I was in Junior College but I wasn’t able to cope with both school and sports. I went on to study Mass Communications at a polytechnic, which worked better for me. There, I could grasp the concepts better and I was finally enjoying what I was learning.

In 2017, I returned to the national team and I haven’t stopped training since.

How is it different this time, juggling university and hockey?

It’s still not easy, and I do lose a bit of sleep here and there. But one thing I pride myself in is how I make sure I give my all to any task I’ve committed myself to. For instance, if I have an assignment to complete and training to attend, I’d try managing my schedule better to achieve both instead of allowing myself to skip training. To me, studies and training are both equally important to me.

What helps is having a strong support system, and I have that in SMU. I have another teammate studying here and she helps by reminding me of what I have to do. I also think we complement each other well – she’s better at numbers while I’m better at writing, so we help each other out in assignments and school work too.

How has the university supported you in your academic and sporting ambitions?

I’m very grateful to the team at the SMU Office of Student Life. They’re so supportive of the students, including us national athletes.

In SMU, students have to bid for our modules every semester, and the team at the Office of Student Life assists us in bidding for our modules, ensuring that what we’re taking for that semester do not clash with our training schedules.

The professors also arrange for extra sessions to help us better understand what has been taught in their modules as well. Due to Covid, I also haven’t had to skip school since lessons have been moved online, so that has also helped me to keep up with school work.

How has training been like, especially with the pandemic?

We’re still training. It was through Zoom initially, especially during the Circuit Breaker period last year. The team has a good mix of working adults and students, so we had to rely on programmes that our strength and conditioning trainer assigned us. In a week, I would have to undergo two gym sessions as well as two to three runs.

I have to admit that it was tough at times. Even as an athlete, I found it quite a struggle to stay motivated. When you exercise alone, it gets mundane. So some of us would meet up on Zoom to exercise together.

How is training now?

I’m back training at the pitch three nights a week – Mondays, Tuesdays and Thursdays. And there’s a gym session for strength and conditioning on Saturdays. Even though there are currently no tournaments, I feel it’s an opportunity to continue to train and improve so that when the tournaments come back, I’ll be in a good form to compete.

What are some of your biggest achievements in hockey to date?

Because of Covid, it’s been hard to compete. So I’d have to say that the tournament that still remains fresh in my mind is the 2019 AirAsia Women’s Junior AHF (Asian Hockey Federation) Cup. It was played on home ground and I captained the team alongside two other teammates. This win helped the team qualify for the Junior Asia Cup, which would have been played in 2020 in Japan if not for the pandemic. And while I won’t be able to play in the tournament when it finally happens, because it’s only for players under 21, I’m still very glad I played a part in this historic win. 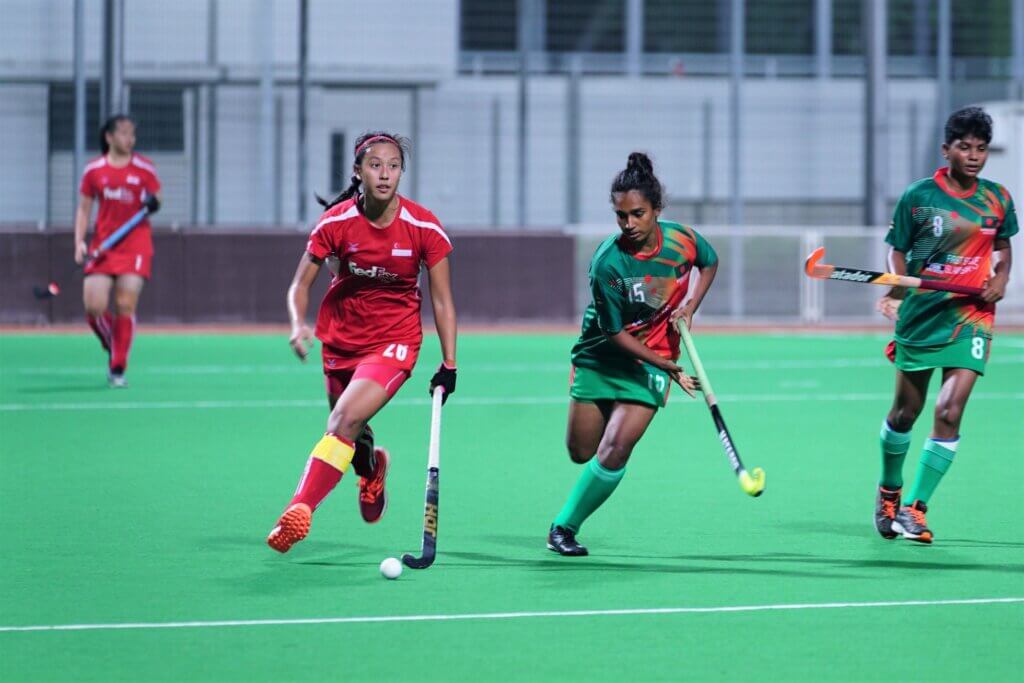 Another tournament that comes to mind is my last senior tournament, also in 2019. It was the Women’s FIH (Fédération Internationale de Hockey) Series Finals held in Ireland, and it was also my first time in Europe, which made it even more memorable.

It was an eye-opening experience playing at such a big tournament and going up against teams from countries like Ireland, Malaysia and Korea. We learned a lot, so it’s been quite a pity that there has been no other competitions for us to apply what we’ve learned ever since.

What are some life skills you’ve picked up from participating in sports at such a young age, and at a competitive level? And how have these skills helped in how you tackle your studies?

Two values come to mind: Determination and Resilience. When it comes to training, it can get quite tough – physically and mentally, but I’ve learned to push myself to go the extra mile. I find this useful especially since I’ve started playing hockey at such a young age.

There’s also building interpersonal and people skills. Being in a team and exposed to different personalities have helped me understand how to communicate and work with people from different walks of life.

How do you maintain personal wellness, especially given how international athletes have recently come under the spotlight for trying to prioritise their mental health during competition?

A strong support system that includes family and friends definitely helps. I’m very close to my family. If I’ve had a long day, I can always talk to my mum about it and share my troubles. I’m generally very vocal and don’t normally bottle up my feelings. Talking about my feelings and letting them out helps me to process what is going on in my life, so I can better cope with it.

Another thing I do is I allow myself down time to relax, even if I’m very busy. I try to avoid worrying about school or hockey during my commutes and once I reach my destination, I switch my focus back on, and go about what I need to do.

This is part of a series featuring up-and-coming athletes of SMU. Look out for more inspiring stories from our student-athletes as they conquer new frontiers in their respective sporting arenas.

Squid Game Life Skills Every Student Can Borrow
Overworked and Sleep-Deprived in Singapore: How To Nurture Healthier and More Productive Workers