A trip to India: An Accounting Study Mission 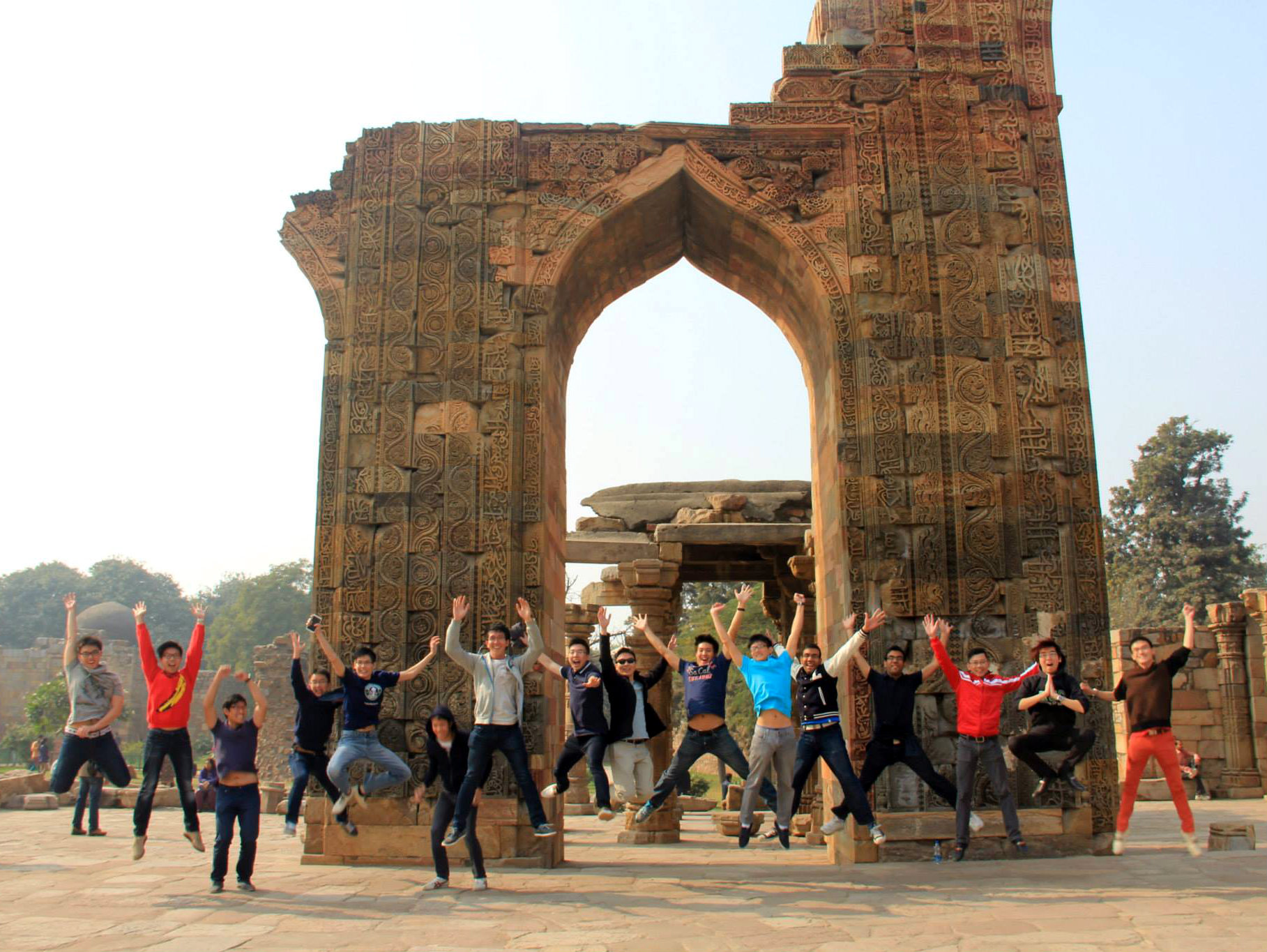 SMU’s School of Accountancy provided a group of students with an opportunity to rediscover India through an Accounting Study Mission trip. One of the students, Sudip Roy, describes his unforgettable experience in this reflection piece.

The light turns red. The green man comes on. Along with the other suited men and women on my side, some with cigarettes in their hands, some with phones to their ears, all in their own worlds, I cross the road. The shiny cars, the homogenous cabs—all waiting in perfect order, obeying the rules before they can rush to new places and make more business.

The song on my iPod changes to a Bollywood number, and as I reach the walkway on the other side of the road, I am transported back to 10.15pm on the 7th of December 2013 as the Jet Airways aircraft touched base in Chhatrapati Shivaji International Airport, Mumbai.

I am Indian by race, ethnicity, passport and punctuality. However, I had never been to Mumbai before. The opportunity presented itself a couple of months ago in August, when Prof Low (from the SMU School of Accountancy) asked my brother and I if we could work with him as Teaching Assistants for a trip he was planning to Mumbai, New Delhi and Pune in December. The prospect of being tourists in our own country excited us, and we agreed without hesitation. Over the weeks that followed, we helped out with several administrative issues such as printing banners, designing brochures, collating student details and scheduling presentations for the pre-trip seminars. At last the day arrived, and with our bags packed, as well as great eagerness and anticipation in our hearts, we approached the Jet Airways counter at Changi Airport, Terminal 2 with 26 other students, Prof Low and KB, the Accounting Study Mission (ASM) Administrator.

India is very different from Singapore. It’s heterogeneous. It’s a land of many different sounds, sights and smells. Cars don’t wait for you in a perfect line at a traffic signal. Many roads don’t even have a traffic signal. Vehicles and pedestrians compete for space and passage. Every direction presents something new to the eye—a man selling tea at a roadside tea stall, a dog and a homeless man basking in the sun on the pavement, an Audi driven by a rich gentleman’s son blasting Bollywood music, the smell of jalebis (fried sweet fritters) and chai (tea) wafting through the air, the poster of a new Hindi movie on a billboard, the sign of a political party on the wall, teenagers playing cricket in narrow alleys between rows of brick houses, young corporate professionals taking a smoke break near a tea shop outside a large glassy office—a random microcosm of an ordinary street on an ordinary day in any ordinary city in an extraordinary country.

What makes this country extraordinary? When you magnify and multiply the heterogeneity and vividness of each slice into a country with the largest democracy, the second largest population and seventh largest land area, you get an immensity of beauty. India has everything—the mountains, plains, rivers, plateaus, seas, lakes, canyons, glaciers and oceans; summer, spring, autumn, winter and monsoon; dozens of different communities, cultures, clothes and calendars; a myriad of multiple foods and festivals; hundreds of different languages and dialects; beauty in different shapes, sizes, colours, textures, sounds and fragrances. 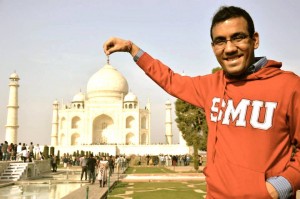 The most interesting parts of the trip, however, were the visits to the cultural sites in the cities. We were amazed to see how Asia’s largest slum—Dharavi (in Mumbai), with over a million people living in small, dingy houses separated by foot-long corridors on 500 odd acres of land, spotted with garbage dumps and open drains—brings in a revenue of over 650 million USD a year. We were fascinated to see the crows hovering around the Tower of Silence beside the Hanging Gardens, ready to devour the flesh of the dead bodies disposed by the Parsis; the 27 storied private residential house of Mukesh Ambani, Antilia, with a staff of about 600 to serve the family; the hundreds of washer men in Dhoby Ghat beating their customers’ dirty clothes against stumps of stone in pools of water to wash them. We felt the breeze over the Arabian Sea near The Gateway of India and soaked in the majestic grandeur and magnificence of the Taj Mahal and Humayun’s tomb in Agra and Delhi respectively. We admired their architecture, history and symbolism. We gorged on the naans, daals, butter chicken, paneer and tandoori murgh.

And in addition to this, we absorbed the daily pulse of the country. India is a land of extremes. You have posh brands of cars being chauffer-driven on the roads, and the homeless beggars knocking on their windows at traffic signals. It is a country of great hospitality. There is a belief among Hindus that guests are equivalent to Gods, and must be treated like Gods. All the companies we visited were gracious enough to host sumptuous lunches for us in the afternoons and a wide assortment of cookies, cakes and beverages in the evenings. It is a country of warmth, festivity and differences. A country where everyone is welcome, where every day is a celebration of life. 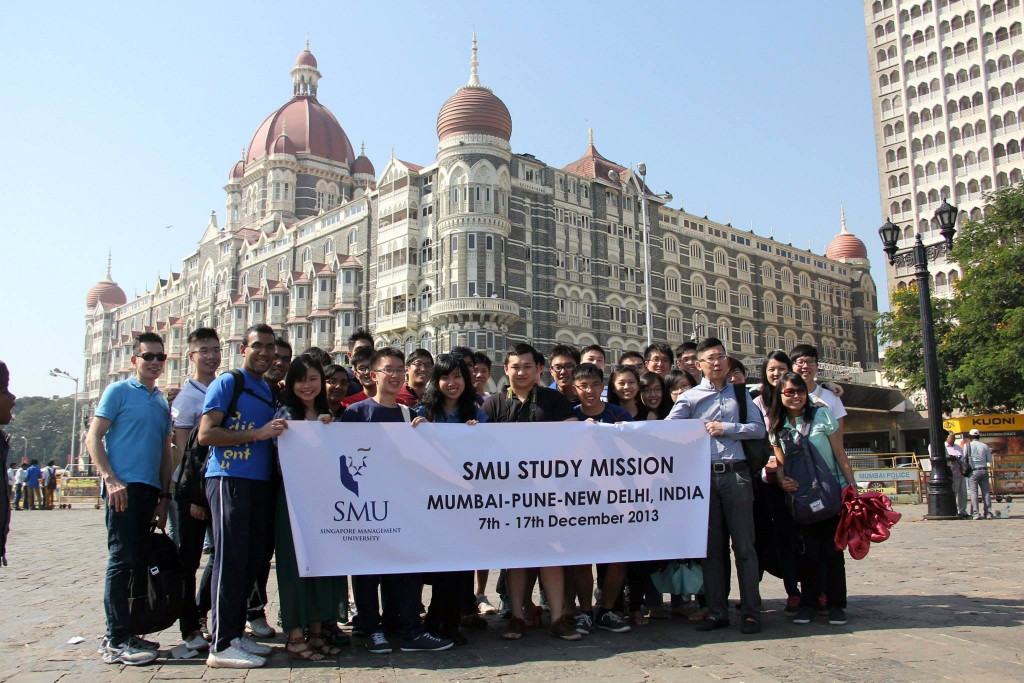 Of course, there were challenges we faced on our trip. Indians tend to be relatively more laid back than Singaporeans, and this caused us delay on several occasions like the local train journey in Mumbai or the packed breakfast in our hotel in Delhi. There is a lot of traffic on the roads and significant commotion everywhere you go. We were even witness to small, random acts of open corruption wherein visitors bribed guards to let them enter monuments past the closing time. Such things are close to unimaginable in Singapore, and there is a lot India can learn from it.

But what’s remarkable is the way the country works despite this chaos. The train leaves the station, the traffic resolves itself, the nation moves ahead. In fact, there’s a certain beauty in the chaos, a certain vibrancy that makes you feel alive. It made us Singaporeans realise the comfort and convenience we’re used to back home. Most things work smoothly and there is very little out of order. We shouldn’t work towards chaos and commotion, but we can learn from it. In the face of adversity and challenge, we shouldn’t break down or give up. India teaches us how a billion people live every day with patience, strength and resilience, and with a smile on their faces before they retire to bed at night.

Personally for me, the trip was a fabulous experience. I became a tourist in my own country and explored things I had never seen before. I saw new things and learnt new ways. It was interesting to blend two cultures and appreciate the beauty of the merger. More importantly, I got to make new friends from the School of Accountancy—people I don’t usually meet or come into close interaction with.

People usually wouldn’t choose India to make a trip to. But if there’s one thing that SMU has instilled in me, it’s this—one should try and be different and take the road less travelled. There’s a tremendous amount to be learnt and imbibed. I’m not saying this because I’m an Indian by race, ethnicity, passport and punctuality. I say this because I saw a whole new India a month ago, an Incredible India.

How to enhance your employability: Five quick tips from SMU’s career centre
An inclusive and diverse U