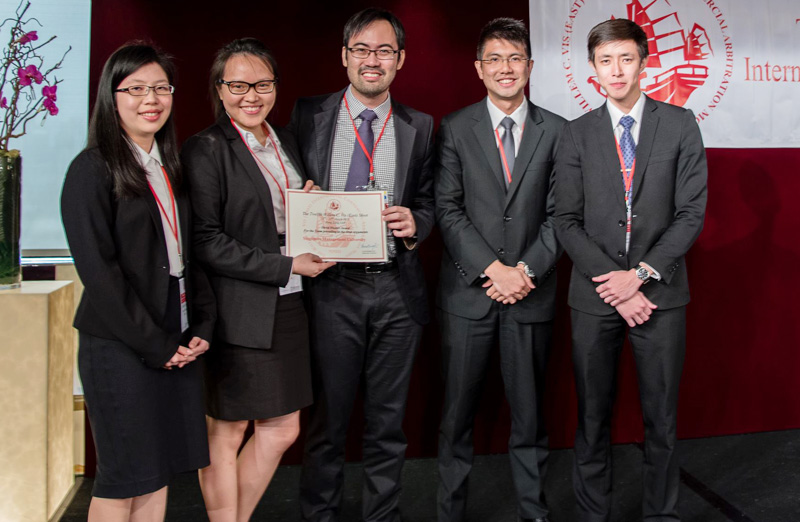 In this series of posts, our student Eden Li provides a rare glimpse behind the scenes of SMU School of Law’s prestigious international moot court programme. Follow Eden on her team’s journey to victory at the Willem C. Vis (East) International Commercial Arbitration Moot 2015. Part 1 of this series can be found here.

After the Shanghai pre-moot, the Vis East team flew directly to Hong Kong without any rest in between. The scale of the moot was unlike anything I had experienced before: the Vis East is the third largest moot in the world, and this year, there was a record turn-out of 109 teams hailing from every continent (except Antarctica of course). 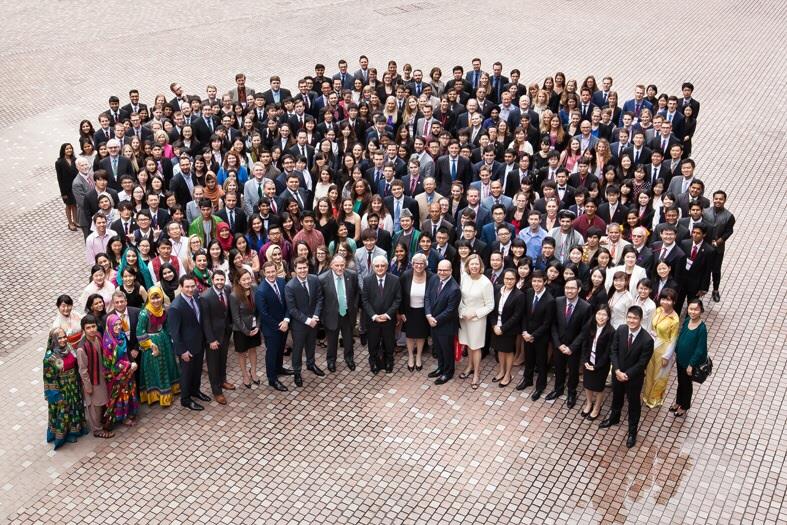 We went up against nine teams in total, facing four universities in our preliminary rounds. Our first round against Waseda University was the most memorable for me because it was my worst performance in the entire moot. I spoke too quickly, too softly, and had difficulty convincing the judges. The round left me demoralised, but fortunately, a dim sum meal helped to lift my mood and restore my fighting spirit in time for the next round.

Another memorable preliminary round was the one against Monash University, which had an excellent track record in both Vis competitions. We faced an extremely tough trio of judges who fired questions at us non-stop. That was where all our practice rounds paid off: we remembered to stay pleasant and unflustered, and to answer the questions directly.

Overall, our performance in the preliminary rounds carried us into the round of 32, where we were matched against Tsinghua University, champion of the first-ever Vis East in 2004. We prevailed against them and also triumphed in the round of 16 against National Chiao Tung University.

Our opponents in the quarterfinals were the champions of the Shanghai pre-moot, the University of Denver. We remembered them as being completely unflappable even in the face of heavy questioning. To match them on that front, we too had to be equally calm and cool. Unfortunately when the round began, the questions came fast and furious – it was tough to remain unfazed under such pressure.

After the round, we couldn’t be sure if we performed well enough to progress. We were ecstatic when we did, and that morale boost followed us into the semi-finals against former Vis champions West Bengal a few hours later. Finally: SMU was through to the finals, facing off against Arizona State University.

The final phase of our historical achievement

The Grand Final was held the next morning at Renaissance Harbour View Hotel. The entire room was packed with arbitrators and moot teams, and I couldn’t help but feel intimidated – it was my first time mooting in front of such a large audience! Thankfully, our months of preparation paid off, and those nerves fell away once the moot began proper.

Jerald and Eden in action, during the Grand Final.

Jerald spoke first, doing an excellent job. He was followed by our two opponents in succession, and I spoke last. The final speaker typically faces some pressure in closing on a strong note, and I definitely felt it during my turn to speak. I just had to convince myself that this round (despite being the Grand Final) was really no different any other round where I had gone up as the last speaker! The months of preparation and the back-to-back rounds in the Vis East itself had primed me to handle the stress of the moment.

I had nearly made it to the end of my submissions when the President of the Tribunal threw me a curve ball. I had made a contentious point, and she asked me a hypothetical question that built on that controversial proposition. I knew it was a trap: if I agreed with her, I would essentially have contradicted my entire argument and we would lose. So I took my courage in both hands and disagreed with her, although she happened to be an internationally-renowned academic who wrote the most authoritative textbook on the UN Convention on Contracts for the International Sale of Goods!

After the round ended, we sat through what felt like an excruciatingly long lunch. When it was finally time to go on stage, my nerves were at an all-time high. My teammates even had their phones in their hands, ready to update everyone waiting back home.

And to our great exhilaration and relief, we won. It felt almost surreal when the Tribunal announced that SMU had won the David Hunter Award for the Prevailing Team in the Oral Arguments. It felt amazing to know that our hard work over the past eight months had borne fruit. We had made history, not just for SMU, but also for Singapore.

The Vis (East) team with their coach Lionel, after their historic win.

But the journey wasn’t over yet: the Vis team was flying off soon, and there was no time for the Vis East team to rest on our laurels as we had to quickly gather our thoughts and impart as many tips to them as possible. I was confident that they would perform equally well in Vienna. And perform they did – the Vis team breezed through their preliminary rounds and knock-out rounds, making it to the finals against the University of Ottawa. Although Ottawa prevailed, we made history for SMU by being the only university to reach the Grand Final of both Vis competitions in the same year, an achievement that received international press coverage in Global Arbitration Review.

Overall, our achievements proved to be a part of a magnificent season for the SMU international moots programme as a whole: our teams made it into seven championship finals in this academic year alone.

An international moot experience is unlike anything else that law school offers. It gives you amazing international exposure, challenges you to master a new area of law and improves your legal writing and oral argumentation skills like no other elective will. Although the Vis journey was by the far the most painful and challenging experience of my entire SMU life to date, I wouldn’t have missed it for the world.

Part 1 of this series can be found here.
Find out more about SMU’s international moot court programme here.